You’ll forgive me if I don’t believe the media hype over the alleged death of Mumar Gaddafi. Once bitten twice shy and all that. As I noted at the time, the death of Saddam Hussein was more than likely faked. The story of the Gaddafi’s ‘death’ strikes me as a little too similar to that of Saddam (pulled from a ‘hole’, ‘hiding like a rat’ etc.) and the images and videos that are doing the rounds on the mainstream media sites are waaaay too grainy to be proof of anything. At least one of them (below) is clearly a doctored version of an image purportedly taken at the site of Osama’s death, which in itself could be taken as evidence that the same people were involved in both media events. 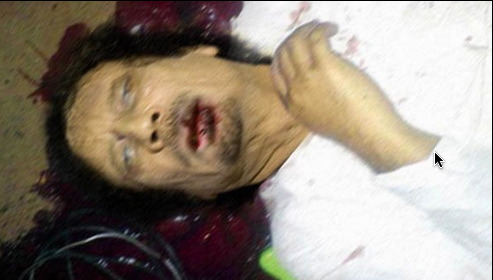 Look at ‘Gaddafi’s’ left shoulder.  The pictures of the dead men at ‘bin Laden’s compound‘  contained one of a man with a “water gun” beneath him. The gun was bright green, the blood was dark red, and the man wore a white shirt and had dark black hair.  He had one hand across his chest. 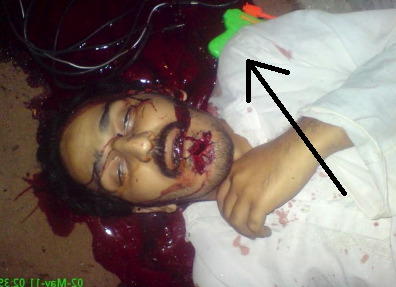 Look familiar?  The CIA photoshopper simply flipped the image and put Gaddafi’s face on it.  The water gun was simply moved  slightly so that the orange on the gun isn’t visible. (Hat-tip to Pundit Press)

Of course, it is no secret that the events in Libya over the past few months have been nothing but ‘regime change’ by NATO forces, with the ‘freedom-fighting rebels’ being a gang of cut-throat mercenaries (paid with US, British and French taxes) and entirely unrepresentative of the majority of the Libyan people. But the will of the majority has never been a concern when it comes to NATO’s phony  ‘revolutions’.

In fact, let’s be honest and logical about this, the publishing of grisly (and grainy) photos and video of the alleged death of Gadaffi is not for the benefit of the global public at all. Rather, it is for the benefit of the leaders of any other nations who might be thinking about disobeying the dictates of the US Empire and the World bank. After all, who wants to be dragged out of a ‘hole’, unceremoniously shot and plastered all over the global media? Even if it isn’t really you, that kind of bad press can be hard to shake off.

“We would have preferred him to be able to face justice at the International Criminal Court or in a Libyan court for his crimes. We don’t approve of extra-judicial killings. “

Which is such fantastical BS that I think Hague deserves a prize. If Gaddafi was in fact executed today, then Hague and his ilk in the US and France are undoubtedly delighted. Gadaffi in the dock at the Hague was the very LAST thing any members of the US, British or French criminal enterprises (aka governments) would have wanted to see. Mainly because of the large quantities of beans he would have spilled.