Given that most people have already taken a position on the topic, it seems a bit late in the day to be pointing this out, but there is now clear evidence to suggest that the ‘Russia hacked our election’ claim is not only entirely false. But the people who made the claim in the first place – members of the US intelligence, political and corporate establishment (as well as other ideologues) – were and are themselves the creators of the only “Russian troll” social media accounts that have actually been shown to have done any ‘hacking’.

A December 19th 2018 NY Times article reveals that a group of “Democratic tech experts” decided to use “similarly deceptive tactics” (as those imputed to Russian trolls) in the Alabama Senate race contested by Roy Moore in December 2017. An internal report on what is called the ‘Alabama effort’, obtained by The Times, says explicitly that it “experimented with many of the tactics now understood to have influenced the 2016 elections.” The project’s operators created a Facebook page on which they posed as conservative Alabamians, using it to try to divide Republicans and even to endorse a write-in candidate to draw votes from Mr. Moore. And how was the division sown?

“We orchestrated an elaborate ‘false flag’ operation that planted the idea that the Moore campaign was amplified on social media by a Russian botnet,” the report says.

One participant in the Alabama project, Jonathon Morgan, is the chief executive of New Knowledge, a small cyber security firm that wrote a scathing account of Russia’s social media operations in the 2016 election that was released this week by the Senate Intelligence Committee. Morgan said that the Russian botnet ruse “does not ring a bell,” adding that others had worked on the effort and had written the report. He said he saw the project as “a small experiment” designed to explore how certain online tactics worked, not to affect the election. This appears to be a lie on both counts, given that as the AL Senate race was in process, Morgan tweeted that the “Russian botnet” that he and others had created was “taking an interest” in the campaign.

In addition, in their December 19th article, the NY Times stated that the scheme to link the Moore campaign to thousands of Russian accounts “drew national media attention.” That’s pretty far from a “small experiment not designed to affect the election” as Morgan claimed. As a result, Morgan now claims that the “elaborate false flag operation” that he publicly acknowledged and tweeted about, never happened.

Notice in the tweet above that Morgan references something called ‘Hamilton68’ that was tracking the “Russian trolls”. ‘Hamilton68’ is a project of the ‘Alliance for Securing Democracy‘ (ASD), which is:

Its advisory board includes Neocon and Neoliberal luminaries such as Mike Chertoff, Bill Kristol, Mike McFaul and John Podesta. All the members of the ASD advisory board are self-confessed ‘never Trumpers’ and ardent Hillary supporters. Bill Kristol is even a fan of the ‘deep state’.

‘Hamilton68’ is described as a ‘dashboard’. A dashboard in this context is merely a tool for the administration of websites (or Twitter accounts for example). Developed by the Jonathon Morgan, the dashboard is used to monitor and record what ASD claims is “one Russia-linked network on Twitter of roughly 600 media accounts”. An article from Wired.com states that “the Hamilton68 team keeps its list of suspected Kremlin trolls secret“. According to the Hamilton68 Methodology page on the ASD web site, the private list of ‘Russian trolls’ includes the following types of social media users:

Basically, the spooks and ideologues at the ‘Alliance for Securing Democracy’ look at Twitter and FB accounts of organisations like RT.com, Sputnik.com and other Russian-based news outlets plus the Twitter and FB account of any news site or individual that promotes any news story that diverges sharply from the US and European ‘Altanticist’ mainstream media narrative about world affairs.

Of course, just in case it needs to be said, there is no evidence, AT ALL, that the Russian government or any Russian news agency sought to influence, or succeeded in influencing, the 2016 US election in a concerted way. Equally, there is no evidence, AT ALL, that any such Russian news organisations or individuals have been seeking to ‘sow division’ in US society by promoting ‘right’ or ‘left’ wing view points on social media. What HAS occurred is Russian news outlets have consistently presented a viewpoint on world affairs different to that promoted by the Washington establishment and its media, and individuals across the world have developed perspectives, in the normal way, on world affairs and commented on them on social media.

What is clear at this point is that, as soon as Trump was elected president (if not before), a cabal of former and serving intelligence and government operatives, along with some ideologically-possessed dupes like Jonathon Morgan, decided to launch a campaign to undermine Trump’s election win by smearing him as Russia agent (the now infamous Clinton/Steele Dossier) and accusing Russia of ‘subverting American democracy’ directly by both hacking the DNC emails and running a social media disinformation campaign on social media.

Over the two years since Trump’s election, the campaign has been expanded to include efforts to do precisely what the Washington establishment falsely accuses Russian of doing: subverting American democracy. It seems reasonable at this point to suggest that this was the plan all along. After all, increasing control over the thoughts and beliefs of the US population has always been the ‘bread and butter’ of the US ‘deep state’.

At the end of last month, someone working on the ASD’s ‘Alabama project’ leaked a copy of the project’s after-action report. It details that ASD:

Our strategy was anchored on 3 goals:

The report concludes with this:

Below are images of the pertinent pages from the report. The images have been tweaked to remove watermarks and metadata, hence their appearance. 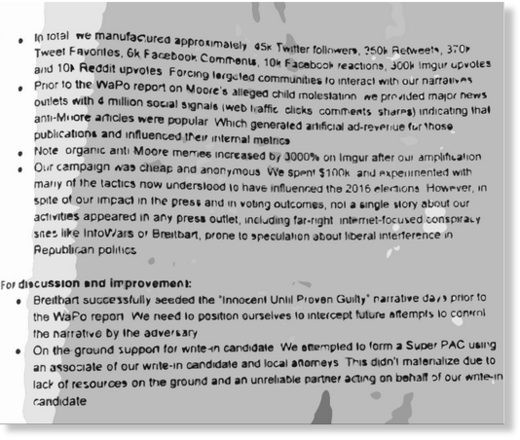 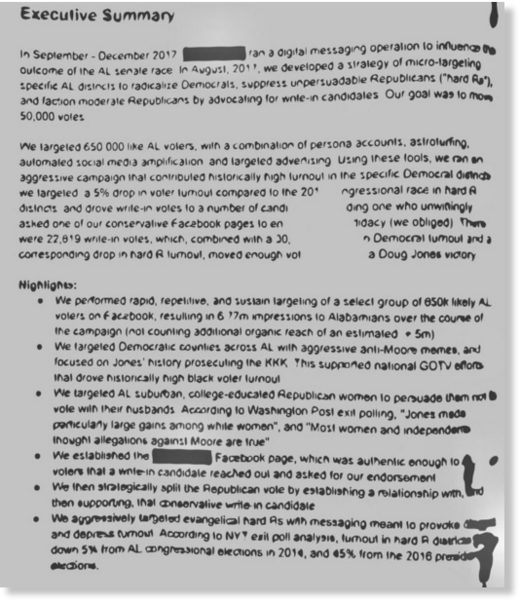 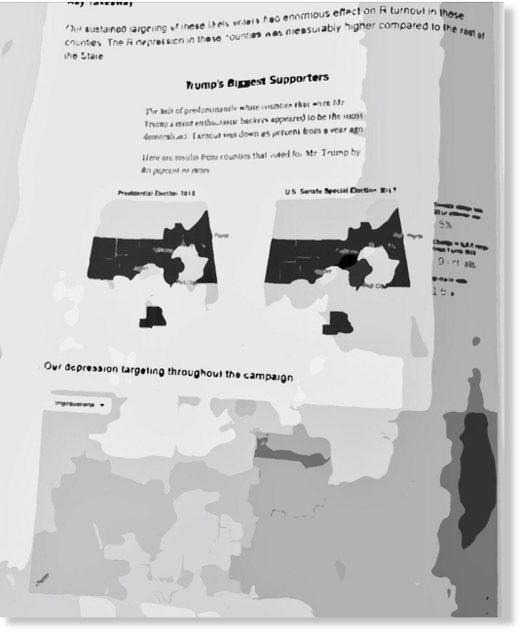 The saddest aspect of this entire affair (for me anyway) is the fact that so many America citizens have swallowed the obvious lie about “Russian meddling”. There are clear geopolitical reasons why the Anglo-American establishment chose Russia to be its whipping boy. The reason Trump was thrown to the wolves is equally unambiguous: Trump is not possessed by the ideology of the US establishment that holds global domination to be an end in itself. And as POTUS, that makes him their enemy. More to the point, when the US establishment talks of someone provoking divisions in US society and attacking American democracy, the American people need not look outside their borders for the culprit, but rather to their own intelligence and security services (aka ‘the deep state’) who have a well-publicized past in carrying out precisely that kind of social engineering.

COINTELPRO (Portmanteau derived from COunter INTELligence PROgram) was a series of covert, and often illegal, projects conducted by the FBI and other intelligence agencies aimed at surveilling, infiltrating, discrediting, and disrupting domestic political organizations. Intelligence agency records show that COINTELPRO resources targeted groups and individuals that were deemed subversive, including the Communist Party USA, anti-Vietnam War organizers, activists of the civil rights movement or Black Power movement, feminist organizations, the American Indian Movement and a variety of organizations that were part of the broader New Left.

The program also targeted right wing and nationalist groups including Irish Republicans and Cuban exiles. The FBI also financed, armed, and controlled a right-wing group of former members of the Minutemen anti-communist para-military organization, transforming it into a group called the Secret Army Organization that targeted groups, activists, and leaders involved in the Anti-War Movement, using both intimidation and violence.

COINTELPRO tactics are still used to this day, and have been alleged to include discrediting targets through psychological warfare, smearing individuals and groups using forged documents and by planting false reports in the media; harassment; wrongful imprisonment; and illegal violence, including assassination. The intelligence agencies’ stated motivation was “protecting national security, preventing violence, and maintaining the existing social and political order.”

And we all know which “political order” that is: the one the vast majority of us are not part of.

More than 40 years ago, the Church Committee exposed broad scale ‘meddling’ in American social and political life by ‘deep state’ intelligence agencies. Do we really need to wait for the US Senate to convene another committee that will, without doubt, expose the fact that the same intelligence agencies are behind this most recent COINTELPRO campaign?