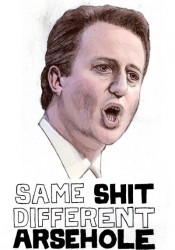 It’s official, the British people have a memory span just short of 9.5 years, at least according to David Cameron.

9.5 years ago, then UK Prime Minister and psychopath par excellence, Tony Blair, told the British people that Saddam Hussein could attack them with chemical weapons within 45 minutes. Those who had been keeping track of developments in the run-up to the Iraq invasion knew at the time that this claim was a despicable lie, within 9 months later (after the invasion had been launched of course) the claim would be widely acknowledged as a blatant lie designed to garner public support for the murder of 1.5 million Iraqi citizens and the theft of Iraqi resources.

Yesterday, the new UK puppet psycho PM, David Cameron, decided that the time was right for the big lie redux, and to let the British people know that Iran is now planning to attack the UK with nuclear intercontinental missiles.

â€˜I donâ€™t believe that an Iranian nuclear weapon is just a threat to Israel. It is also clearly very dangerous for the region because it would trigger a nuclear arms race but also itâ€™s a danger more broadly, not least because there are signs that the Iranians want to have some sort of intercontinental missile capability. So we have to be clear this is potentially a threat much more widely.â€™

Like the Iraq dossier lies, there is no evidence whatsoever for Cameron’s claim, the details of which were furnished to him by MI6 chief, Sir John Sawers. On the contrary, and again like Iraq, there is lots of evidence that Iran has no nuclear weapon capability and is not attempting to gain such capability. Neither is there any evidence that Iran has missiles that could reach the UK. More to the point, even if Iran did have nuclear weapons with global strike capability, it would be the result of the US government supplying the Iranians with the means to do so, and it would still pose no threat to anyone or anything other than Israeli (and therefore US and European) government nuclear and political hegemony in the Middle East. Hegemony through which Israel, the US and European governments have been murdering and persecuting Arabs for many years.

Still, the question remains as to whether or not the British and world public have a memory that goes back longer than 9.5 years, and if so, if they have had enough of being blatantly lied to and treated like morons.