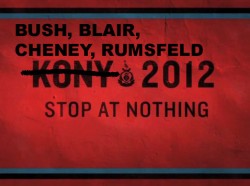 The people behind this campaign are MASSIVELY misguided. Or it’s a CIA-sponsored psy-ops.

Take for example the fact that one of the 12 ‘policy makers’ (US politicians) that they are targeting to help them ensure Joseph Kony is arrested is George ‘Dubya’ Bush. The puppet president who presided over the murder of 1.5 million Iraqi civilians. And we’re all meant to believe that people like him are going to care about the plight of Ugandan children? Kony is Bush’s ideological brother for god’s sake.

Other than their complete ignorance of the fact that the US political elite is populated by the world’s worst war criminals, the makers of this video are also massively ignorant of the truth about WHY Uganda, and many other African nations, are subjected to the brutal excesses of war lords and have been for so many decades.

To cut a very long and complex story short, people like Joseph Kony (who, by the way, is no longer a real threat to the people of Uganda) and so many other African tin-pot dictators are the product of long-term US (CIA), British, Israeli and French interference in African nations.

Joseph Kony leads the Lord’s Resistance Army (LRA). In 2010, the LRA crossed into Darfur in Sudan and since then have been enjoying the protection of the Sudanese military, and Sudan’s notorious president, Omar Hassan al-Bashir, who has been a longtime LRA patron. al-BashirÂ  is accused by the International Criminal Court of war crimes and genocide in Darfur. It should come as no surprise then that the CIA has long-standing and close ties with al-Bashir and Sudanese intelligence services.

The aim of the US (and other) governments has always been to destabilize African nations in order place into power any individual that would be amenable to the theft by US corporations of the resources of African nations. This destabilization process, which includes the massive and repeated provision of weapons to the war lords and thugs, inevitably leads to the killing and maiming of thousands of civilians. And it continues to this day.

Elliot Ross of theÂ  Africa is a country blog sums up the problem with ‘Kony 2012’:

“To ask people to climb down from the soaring heights of â€œKony 2012â€, a place where they get to feel both sanctified and superior, and truly descend into the mire of history and confusion is simply too big a task. It would be boring and difficult and it would not be about Facebook or Angelina Jolie or coloured wristbands or me. When the euphoria evaporates and the Twittersphere has dried its tears (probably by the end of this week), all that remains will be yet another powerful myth of African degradation.”

In short, forget about ‘Kony 2012’.Â World peace starts at home, not in an African nation controlled by Western governments. If you really want to make this world a better place, let’s start ‘Bush, Blair, Cheney, Rumsfeld, Obama etc., 2012’. Let’s make them famous for their massive war crimes in Iraq and Afghanistan, for the murder of up to 2 million Iraqi and Afghan civilians, and for the the children who continue, to this day, to be blown to pieces by US soldiers and US ‘drone’ aircraft under the Imperial war of aggression known as the ‘war on terror’.