A British teenager has been arrested and will appear in a UK court as a result of a comment he posted on Facebook about the deaths last week of six British soldiers in Afghanistan.

On March 8th, 19 year old Azhar Ahmed posted a comment on his Facebook page about the deaths of 6 British soldiers in Afghanistan on the 6th March. On the same day as Azhar’s post, a Facebook group entitled Azhar Ahmed Scumbag!!! was created (with large Union Jack flag as its logo) and, someone (perhaps the creator of the FB page) reported his comment to the police. The following day, Friday, Azhar was arrested and charged over the weekend. He was then released on bail and will appear in Dewsbury magistrates’ court on March 20th. A online petition has also been created that demands that Azhar be “sent to prison for hate crimes against British soldiers”.

Most disturbing here is not that there are many rabid Right Wing Authoritarian types on Facebook, but that the British police clearly took the complaint seriously and took the time and effort to investigate the matter and saw fit to send a squad car to Azhar’s house to arrest him. 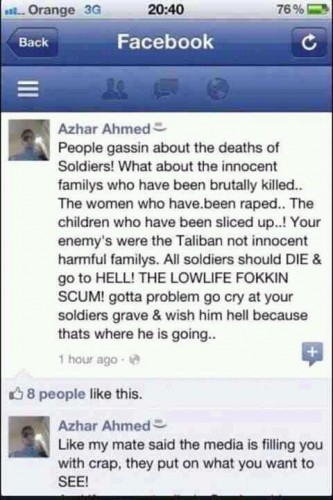 Azhar, while British, is obviously of Arab extraction. In modern multi-cultural Britain, rife as it is with with racism, this clearly didn’t go down well with the more ‘right wing’ British Facebookers. Indeed, while those lobbying for the incarceration of Azhar accuse him of ‘hate crimes’, Azhar’s motivation was clearly humanitarian – he was incensed by the deaths of civilians – while his detractors are clearly racially motivated, i.e. they either don’t like him because he is of Arab extraction, or they are fiercely pro-British.

The simple fact of the matter is that Azhar was making the reasonable, if emotionally charged, point that the British media is massively biased towards British troops as they engage in an imperial war of aggression that has resulted in the deaths of tens of thousands of Afghan civilians. When British soldiers die in combat in Afghanistan, the British press calls it a “tragedy”, when Afghan civilians are murdered by British or US soldiers, the US and British media simply report it, if indeed the story even reaches the Western media.

On the deaths of the six soldiers last week for example, the British Prime Minister David Cameron said that it was a “desperately sad day for our country“. And that, “every death and every injury reminds us of the human cost paid by our armed forces to keep our country safe.”

Of course, this isn’t quite true. It’s only the deaths of British soldiers that are used to catapult the propaganda lie that any Western soldier in Afghanistan is there to “keep our country safe”. The murder of Afghan civilians is used to to reinforce the lie that most Afghan civilians are probably Taliban and that Western troops are trying to “keep our countries safe” by killing them. The truth of the matter is that the deaths of those six British soldiers probably saved the lives of an unknown number of Afghan civilians, because there are at least six less Western soldiers in Afghanistan that might end up murdering, or facilitating the murder of, Afghan civilians.

The most worrying aspect of Azhar’s case however is obviously the fact that he was arrested for something he posted on Facebook. If he is charged and imprisoned, or even merely fined, it will set a dangerous precedent in British courts. At the same time, we have to wonder what, if any, relation the arrest of Azhar has to the recent announcement that the British government is attempting to push through new totalitarian laws that would allow British intelligence to monitor and retain data on all civilian internet communications, including Facebook posts.

The only appropriate response to this obvious effort to criminalised political dissent is for as many people as possible to post comments on Facebook that, more or less, say the same thing that Azhar said: British (and US) troops in Afghanistan are there illegally and are engaged in committing war crimes against a civilian population. Their deaths should ALWAYS be used to highlight that fact, rather than used by the press and others to disseminate the lie that they are there to protect anyone or anything other than the psychopaths in power and their desire to dominate the entire planet.