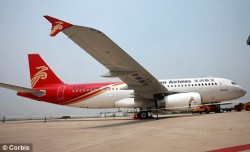 Here (yet again) is an example of what REALLY happens when 6 hijackers (more, allegedly, than on any plane on 9/11) try to take over a plane without any significant weaponry.

Two men whoÂ were part of a six-strong gang, aged 20 to 36, who attempted to hijack a Tianjin Airlines flight bound for Urumqi last Friday were beaten to death by passengers and crew, state media said today.

Minutes after the flight carrying 101 people took off from Hetian, southwest Xinjiang, three men in the front and three in the back stood up and announced their plans to terrified passengers, according to reports.

The group, all from the city of Kashgar in the west of Xinjiang, then broke a pair of aluminum crutches and used the pieces to attack passengers while trying to break into the cockpit, a regional government spokesman said.

They were tackled by police and passengers who tied them up with belts before the plane returned to the airport safely just 22 minutes later.

Several passengers and crew members were injured in the tussle. The alleged hijackers were taken to hospital where two of them later died, the state-run Global Times reported.

Yet millions still believe that, in a similar situation on board four commercial flights in the USA on September 11th 2001, the passengers and crew were unable to do anything to stop a few alleged terrorists equipped with razor blades taped to credit cards. Said terrorists then went on to demolish two massive skyscrapers, punch a hole in the Pentagon andÂ  kill almost 3,000 people. Even more unbelievably, the 9/11 passengersâ€™ inability to do what the Chinese passengers did has since led to the invasion and occupation of at least two countries, the deaths of millions of civilians, and the destruction of civil liberties the world over.