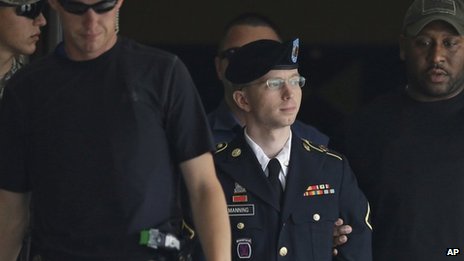 The Bradley Manning case is such a transparent attempt at intimidation to prevent others from exposing war crimes perpetrated by the US government that it could make even a lethargic baboon scream bloody murder.

Manning was in possession of information that showed that the US government and military had committed crimes against humanity, war crimes, and even genocide against the Iraqi and Afghan people.

Manning’s information included footage of a US military helicopter gunning down a father taking his children to school, evidence of a death squad operating in Afghanistan, and files showing that amongst the innocents being held at GuantÃ¡namo bay prison, who are regularly tortured, are dementia patients, taxi drivers and prisoners of the Taliban.

There are laws in place that made it impossible for Manning to bring this evidence and these charges to public attention without officially committing a crime. This in itself is a crime against truth, justice and liberty.

In the last ten years, the US government has passed many laws that are more than a little reminiscent of the laws usually passed by totalitarian governments.Â  These laws have been passed in the name of ‘national security’ and as a result of a climate of fear under the threat of ‘terrorism’ and the government’s alleged need to protect the American people.

Yet on a daily basis, the US government acts around the world in ways that logically can only INCREASE the threat of attacks (terrorist or otherwise) against America and Americans. Drone strikes, ‘extraordinary rendition’, invasion and occupation of other nations. These are terrorist acts against innocent people around the world that can plausibly produce responses in kind (although those have been few and far between), yet the US government maintains that it must continue to eviscerate civil liberties in America to protect against the terrorist threat that the US government itself is intentionally creating.

Obviously, those laws should be repealed. Until that happens, we can settle the Manning case by simply asking ourselves: which is the more serious offense: War crimes, or theft of information pertaining to those war crimes?