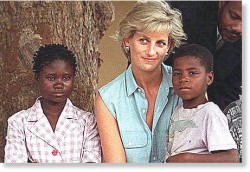 “I do things differently because I don’t go by the rule book, because I lead from the heart not the head, and albeit that’s got me into trouble in my work I understand that, but someone’s gotta go out there and love people, and show it.” – Princess Diana

The mystery surrounding the deaths of Princess Diana and Dodi al-Fayed on August 31st 1997 has been revived recently by the claims of a British SAS sniper whose testimony was part of the trial of another SAS soldier who was convicted of illegal weapons possession. The parents-in-law of the SAS sniper in question, known only as “Soldier N”, claim that he boasted to his wife that the “SAS was behind Princess Diana’s death”.

Unsurprisingly, the media reaction to the story has been to dismiss it, citing, incorrectly, that the investigation into Diana and Dodi’s deaths was conclusive, that it was an accident, and that there was “no evidence of conspiracy”. In fact, this alleged “new evidence” has done little more than provide the media with an opportunity to, once again, ridicule any idea that there was anything strange about the events in Paris that night. It is also interesting to note that, in just a few weeks, a new film about Diana’s life, entitled ‘Diana’, will be released.

The general consensus among the great British and world public seems to be that Diana and Dodi and their driver Henri Paul died as a result of a car crash caused by pursuing paparazzi. It’s rather perplexing that this should be the case because the jury in the official 3-month-long inquiry into their deaths returned a verdict of “unlawful killing” and the paparazzi were exonerated. How does this happen? Well, how did it come to pass that 50% of American citizens believed that Saddam Hussein was involved in the 9/11 attacks, despite the fact that no one, not one person, ever made such a statement publicly?

Answer: The mainstream media’s real job is not to report the news but to ‘catapult the propaganda’ that the ‘elite’ hope will become the new ‘reality’ or historical record.

Two years ago, British film director Keith Allen made and attempted to release a documentary about the death of Diana and Dodi. Due to the content of the film however, Allen was legally prevented from making it widely available to the public. Attempts to upload it to video hosting sites like Youtube and Vimeo have also been thwarted. The documentary provides fairly damning evidence that Diana and Dodi were murdered by the British ‘elite’, with the support and connivance of their French counterparts.

Just some of the details revealed in the documentary include:

If there is a flaw in Keith Allen’s excellent documentary investigation into the murder of Diana and Dodi, it is the emphasis given to the role of the British monarchy in the murder. It is unlikely that the British royals had any significant role in the murder of Diana and Dodi because the British royals do not wield significant power in the UK, and have not done so for centuries. Since the de facto end of absolutist monarchy in England at the turn of the 18th century, the role of British royalty has been one of serving the interests of the established lay authorities, a.k.a. ‘the elite’.

Diana and Dodi were murdered to “protect the British monarchy” only insofar as the continued existence of the British monarchy is important to the civilian ‘elite’ because it lends legitimacy to their claim of ‘natural’ or ‘divinely ordained’ superiority over the inferior rabble. It is, after all, the Queen that appoints governments and bestows knighthoods, peerages and other ‘honors’ on the chosen, and thereby confers regal legitimacy on those so honored and appointed. Of course, behind the scenes, it is ‘her majesty’s government’ (i.e. the self-same civilian ‘elite’) that advises the sovereign on who gets what and when. Without this royal pomp and circumstance, the bestowing of titles by civilians on other civilians would look, for all the world, like a bunch of undeserving bureaucrats pumping themselves up far beyond their station. And the people may not be so eager to sanction it.

Diana’s divorce from Charles, her impending marriage to Dodi al-Fayed (a Muslim) and the possibility that she might expose some of the less than regal goings-on inside Windsor Castle threatened the public image, reputation and very existence of the British Royal establishment, but the threat was felt most keenly among the high-level securocrats in Whitehall and assorted pedophile peers who jealously guard their immoderate privileges and lifestyles.

Dodi al-Fayed was a film-maker (he produced the multi-Oscar-winning Chariots of Fire). His father was a wealthy man. Had he and Diana been allowed to live, we can only imagine what kind of films or documentaries he may have turned his hand to with Diana as his wife and inspiration. Given Diana’s outspoken and compassionate nature, combined with her world-wide public appeal, what might she have said or done, and what might she have achieved had she been allowed to live? With the world as her stage and having the ears of billions, might the last 16 years that have brought us the interminable ‘war on terror’, the invasions of other nations, the slaughter of so many innocents and the institution of a global police state, have been any different?

But it is certainly a sad indictment on the nature and structure of our modern society that an open and loving heart coupled with a natural and widespread popularity is perceived as such a threat by our entrenched ‘leaders’ that their minds invariably turn to murder and cover-ups to ‘solve the problem’. But that appears to be precisely what happened in the case of Diana, and she was certainly not the first victim. This particular story of the summary assassination of a popular hero is anything but new. Julius Caesar was one such hero, and there have been many others over the course of the last 2000 years. Unfortunately, their lives all seem to tell the same story of unfulfilled potential for themselves, the millions they could have inspired, and human society in general.

Watch the ‘Unlawful Killing’ documentary for yourself below:

“The major steps towards societal collapse and planetary destruction include things like assassinations that are accepted by the masses. When such things are not objected to, then the next stage is prepared.”

4 thoughts on “Unlawful Killing – The Murder of Princess Diana”