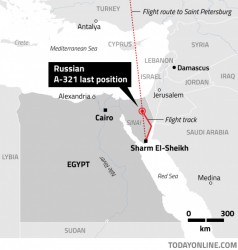 The crash of Kolavia Flight 7K9268 from Sharm el Sheikh, Egypt, to St. Petersburg, Russia, on October 31st killed all 224 passengers and crew, making it Russia’s worst ever aviation accident.

The Airbus A231 disappeared from radar over the Sinai desert 23 minutes after take off. No emergency signal was broadcast by the pilots. The plane began a rapid, almost vertical, descent from circa 31,000 ft until it disappeared from radar at around 28,000 ft. The plane’s debris and passenger bodies were spread over a 20 sq km area, with one 3-year-old passenger allegedly found 8 km from the main crash site. This strongly suggests that the plane broke up in mid-air.

Russian aviation experts have discounted the idea that the plane was shot down by a missile or that a bomb exploded on board. A technical fault that could have caused the plane to suddenly plummet out of the sky and incapacitated the pilots before they could send a distress signal is also implausible. Even if both engines failed simultaneously, the plane would still have been ‘airworthy’ enough to allow the flight crew to glide the plane to an emergency landing over the course of at least 25 minutes.

Something else, something extremely violent, sudden and catastrophic befell the plane and its passengers. Viktor Yung, deputy director of the airline echoed this assessment when he said today that only an “external force” could have caused the plane to suddenly plummet from the sky.

“As the catastrophic incident started to develop, the crew members were rendered completely incapable. This explains why they didn’t attempt to contact air traffic and report the incident happening on board.” Yung said. Aleksandr Smirnov, who supervises the company’s fleet, said that “the only possible explanation is a mechanical force acting on the aircraft, there is no combination of system failures that could have broken the plane apart in the air.”

The Egyptian Civilian Aviation Ministry issued a statement indicating the flight was at an altitude of 31,000 ft when it disappeared from radar screens after a steep descent of 5,000 ft. Flightradar24’s last data from the aircraft shows it climb to 33,500 ft at 465 mph before suddenly descending, within one minute, to 28,375 ft at 71 mph, after which its position was no longer tracked. Since the track of the plane is recorded in 1 minute segments, it is unknown if the plane descended these 5,125ft in one minute exactly, or a percentage of one minute. Airline official Andrei Averianov said that the plane slowed more than 300 kilometers an hour in less than a minute and simultaneously lost 1.5 kilometers in altitude.

On December 28th 2014, Air Asia Flight QZ8501ascended rapidly (6,000 ft per minute) before plunging into the Java Sea, killing all on board. Tom Ballantyne, Sydney-based chief correspondent for Orient Aviation magazine, said the rate of the AirAsia jet’s climb was “just phenomenal“, adding: “I’m not sure I’ve heard of anything that dramatic before.“

He said it would be unusual for weather alone to cause such a rapid ascent, but added that it was possible if the jet hit “some bizarre, unprecedented storm cell.”

Some kind of extreme microburst could explain this kind of rapid ascent and descent. In the past 30 years several large airliners have been knocked out of the sky by microbursts, killing all passengers on board in several cases.

For what it’s worth, 10 hours after Flight 7K9268 crashed, Asteroid 2015 TB145 passed by Earth at a range of just over 480,000 kilometers. TB145 was discovered just 2 weeks ago. In two weeks’ time, another incoming object, also recently discovered, is predicted to hit somewhere in the Indian Ocean. In recent years the incidence of meteors hitting our atmosphere and exploding, causing loud booms around the world, has increased dramatically. The ‘ablation’ effect of a space rock detonating at a high altitude would not only cause a shock wave of air that would be devastating to any aircraft in its path, the concomitant EMP would also likely destroy a planes electronics in an instant. It’s likely that just such an overhead meteorite explosion destroyed Air France flight AF447 over the pacific in 2009.

As of November 3rd, Flightradar24 has provided data at the request of French and Egyptian authorities:

An unknown event that cut the plane’s vertical speed by more than half at an altitude of 29,750 feet occurred at 04:13:19. As the plane reached maximum descent of 24,960 feet, FlightRadar stopped processing altitude data at 30,670 feet at the descending altitude of 20,352 feet per minute.

The new data was released at the request of French and Egyptian investigative authorities.”

To put that in more intelligible language: the plane was ascending at 10km/h at 30,750ft when it suddenly started descending at 65km/h within one second. Three seconds later it was descending at 153km/h. It went on to reach a downward speed of 456km/h before radar data was lost.

Here’s my question. If for some reason the plane’s engines abruptly failed while on an slight ascending course, or a bomb exploded on board and the plane began to fall, how long would it take the plane to register a descending speed of 153km/h? 3 seconds?

For reference, free fall speed (i.e. no air resistance) for an inert object after 3 seconds is 108km/h.