It was the Turkish government’s actions in the immediate aftermath of the shoot-down that makes me now think that these guys were caught with their pants down.

Let’s take them in order.

1) Running to consult with NATO and firing off a letter to the UN: this seems like a fear-based response by Erdogan’s ministers. If they either planned the attack in advance or calmly made the decision after giving ‘fair warning’ to the Russian jets, surely they would also have considered the fall-out and planned for it, thereby affording a certain composure?

2) No pessimistic bi-lateral energy outlook: Within one day of the shoot-down, which the Russian government condemned in rather serious terms, the Turkish Energy Minister was already entreating Russia to not get so worked up and claiming there would be no problem with Russian-Turkish energy relations: “In the heat of the moment, without all the information, it would be wrong to make unguarded statements“, Albayrak said at his swearing-in ceremony in Ankara. “We have close friendly cultural and economic relations with Russia not only in energy, but also across other economic sectors. I am not pessimistic about our energy relations.” The minister also assured the Turkish people that they should not fear the coming winter due to concerns that Russia could halt economic cooperation. That’s an impressive level of confidence given that the Turks has just shot down and, indirectly, murdered a Russian pilot in cold blood.

3) I personally did it!: If there’s one thing I’ve learned about politicians, it’s that they are loath to take personal responsibility for anything, unless it serves their own interests. In the case of an international incident involving the shooting down by Turkish forces of a Russian jet involved in wiping out the jihadi forces that the entire world has come to hate, and which therefore implies significant potential negative attention for the Turkish government, both at home and abroad, you would expect the blame to be placed on as many shoulders as possible, ideally avoiding anyone in the public eye. But in this case the exact opposite occurred:

During a meeting with his AK Party underlings, Turkish PM Davutoglu said “despite all the warnings, we had to destroy the aircraft, the Turkish Armed Forces carried out orders given by me personally.”

Why would Davutoglu want everyone to know that he personally gave the order, a claim that in itself is not even credible given that the jet was supposedly in Turkish airspace for a mere 17 seconds, making it very unlikely that Turkish military command would have had time to call, consult and receive a definitive order from the PM’s office?

Rather than self-assured bravado, Davutoglu’s claim seems to be more evidence of the Turks running scared in the aftermath of the shoot-down and desperately seeking to contain and take ownership of a situation that caught them by surprise. The Turks’ surprise may have been compounded today by the statement of an unnamed US official to Reuters that the US has evidence that the Russian jet was shot down over Syria, not Turkey.

So much can be got away with under the ‘fog of war’.

Too cryptic? Ok, here’s a map. 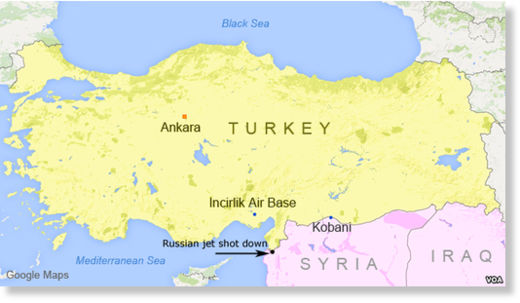 Really? Ok, I’ll cut to the chase; there’s a good possibility that the Turkish F-16 that shot down the Russian jet was not under any official Turkish government orders. It may not have been under any official Turkish military orders either. In fact, its pilot may not even have been Turkish, or if he was, he may have been temporarily acting on behalf of another party with an interest in souring the Russian/Turkish relationship.

Let’s face it, provoking a conflict between Russia and, well…anyone and everyone, is SOP for Uncle Sam. It has been for decades. To that end, the US has eyes and ears almost everywhere, including inside Turkey in the form of a latter day ‘Gladio’ network as revealed by the Ergenekon trials. The Gulen movement – a CIA-backed “moderate” Islamic phony NGO – is also worth looking at in this respect. FBI whistle-blower Sibel Edmonds has inside knowledge of what Gulen is all about:

“Under the guise of schools [Madrasas] in Central Asia & Caucasus his network is involved in training terrorists [from Chechens to other Islamic Jihadis in the area]. The bureau had him under investigations since 1998. However, they were prevented from pursuing the cases [despite all evidence collected] due to direct pressure from the CIA/State Department. How do I know? Some of the case files were under the division where I worked [counterintelligence].”

The bottom line here is that Turkey gains very little, if anything, from attacking Russia in this way, and it risks a lot. The easily predicted Russian response to the shoot-down would be to hit Turkey where it hurts: in the Kurds, i.e. more and faster Russian and Syrian Army support for the Kurds and their campaign to gain and hold as much ground as possible along the Syrian-Turkish border, in advance of further peace talks in Vienna.

The US and Israel have a long history of using the Kurds for various geopolitical ends in the Middle East. The current plan for Russia, as I mentioned previously, is ‘balkanization’ – the break-up of Syria into semi-autonomous regions. The Kurds, with their historical claim and fight for an independent Kurdistan, provide the best justification for kick-starting this ‘balkanization’ plan in Vienna.

If this scenario is close to accurate however, it’s likely that both the Turks and Russians have already figured it out, or will soon do so. What they do at that point remains to be seen.

1 thought on “Always the last to know: Did Turkish government find out about shoot-down of Russian jet after the fact?”