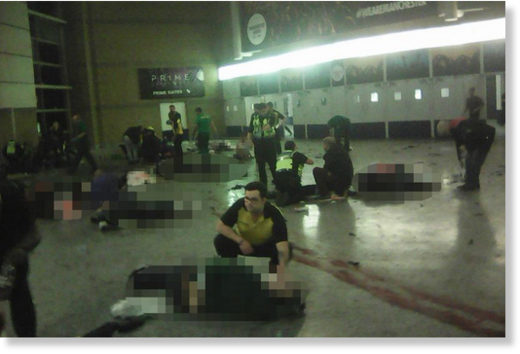 Given that ‘Islamic terrorism’ has been the most influential political and social meme of the last 17 years, the motive for a Muslim terror attack at a UK concert venue 2 weeks before a UK general election may be more complicated than it at first seems.

Even more suspicious is the fact that there appears to have been a deliberate set up for this event that makes it clear that the goal was to directly attack the reputation of the Labour leader Jeremy Corbyn. Immediately after becoming the Labour party leader in 2015, the British media decided that Corbyn’s history of acting as a would-be peace broker in the Northern Ireland conflict between Irish Catholics and the British state made him an easy target. In January this year, British Foreign Sec. Boris Johnson defended talking to Donald Trump by saying it was better than talking to Jeremy Corbyn who “advocated talking to the IRA”.

In recent months however with election day looming, media focus on Corbyn’s ‘support for terrorists’ took a back seat to more important domestic policies like the dire state of the UK health care system and the Conservative party plans to make it (and everything else) much worse for the British taxpayer.

Last Friday however, the British Daily Telegraph ran a story reporting that MI5 had ‘opened a file’ on Corbyn in the early 1990’s due to his support for a united Ireland and fears that he was a ‘threat to national security’. In that report, the Telegraph reminded readers that when he was interviewed by the BBC in August 2015 during his Labour party leadership campaign, he refused five times to condemn IRA violence, preferring instead to condemn all violence by all parties.

Strangely enough, two days later (last Sunday) in an interview with Sophy Ridge on Sky News, Ridge asked Corbyn five times to condemn IRA violence. In response, Corbyn reiterated what he had told the BBC two years ago, that he condemned all killing, whether by the IRA or the British state or its proxy ‘loyalist’ forces (an early version of ‘ISIS’ with a white Western twist), and refused to be coerced into singling out one party or minimizing one set of atrocities to score political points.

While this was a reasonable position to take, in the 48 hours since then, the British media has gone into overdrive to paint him as a terrorist sympathizer, with headlines like “Growing row over Jeremy Corbyn’s links to the IRA as he refuses five times to condemn the militant group” and “Jeremy Corbyn refuses to condemn IRA“, (despite the fact that in the Sky News interview he said “I condemn all the bombing by both the loyalists and the IRA”).

This short black propaganda campaign then culminated in the “ISIS” terrorist attack in Manchester last night, and was underlined by this headline from the Rupert Murdoch-owned Sun tabloid newspaper published two hours after Manchester: 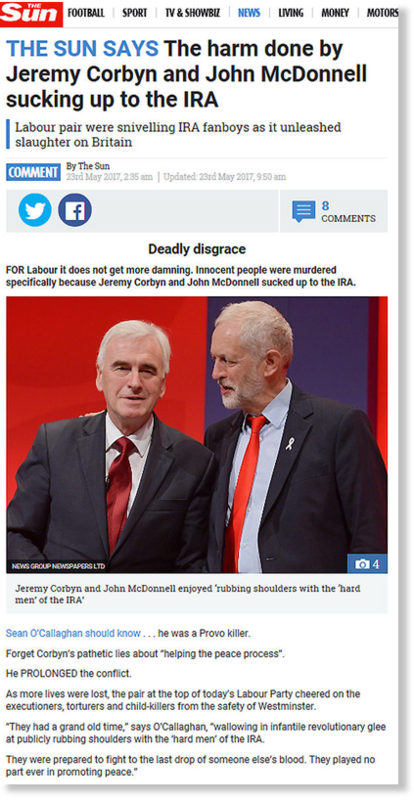 The ‘deep state’ in the UK (and in the ‘West’ in general) seem to be anxious – desperate even – to maintain their control over a population that is increasingly waking up to the reality of outrageous government corruption and lies. As respect for government mouth-pieces in the mainstream media justifiably wanes, these self-styled ‘elite’ will increasingly resort to the blunt force object that is state-sanctioned terrorism to redirect the population’s attention and force them ‘back in line’.

But such brutal tactics come under the law of diminishing returns. This kind of repeated, covert physical and emotional bludgeoning of a population can only work for for so long before people start to notice the complementarity of the establishment’s push to consolidate its power over the people, and the alleged agenda of “ISIS” in bombing Western citizens into submission.