After more than a year of nothing but spurious allegations that the Russia government or Russian trolls or just “Russia” (like the entire country) ‘hacked’ the US presidential election and secured victory for Trump, we now have the hard evidence to back up those claims.

Over the last 2 days, technology executives from Facebook, Twitter and Google testified before Congress and laid out the damning evidence for all to see. Russia had indeed used social media platforms to turn the minds of the American people (or at least the 27% of the electorate that voted for Trump) against Clinton. It was a travesty, a dastardly attack on truth, justice and the American way.

The primary way in which the evil Russians achieved their nefarious goal was by making posts and paying for some ads on Facebook and Twitter. Facebook General Counsel Colin Stretch said that up to 130 million Americans may have seen at least one of the posts/advertisements made on the platform. While that’s a large number of alleged ‘impressions’, the offending posts represent 0.004% of all impressions on Facebook during the time period, but let’s not quibble over numbers. Then again, maybe we should.

In written testimony before the execs appeared before congress, Facebook claimed about 80,000 posts related to the US election were published by “Russia-based operatives” over two years. That amounts to about 1 in 23,000 posts or, as noted, 0.004% of content. Stretch said that the posts were made by “fake accounts”, although how many of these posts were made prior to Donald Trump winning the Republican nomination in May is not revealed. Facebook did, on the other hand, reveal more specific data about 3,000 ads it says were purchased to the tune of $100,000, and that these ads were purchased between June 2015 and May 2017 by 470 “inauthentic” accounts and pages. At least 50% of these ads were, however, posted after the US presidential election was over.

While Stretch claims that the FB accounts were “fake accounts” he does not say how he knows that these accounts were run by ‘Russia-based operatives’ as opposed to ordinary people living in Russia who have Facebook accounts. Facebook is, after all, an international platform for people to express what they want to express. In the run up to the election last year, it seems reasonable to assume that people from dozens of different countries opined on the US election via Facebook, yet none of these posts are seen as influencing the election result, because it seems that only Russian people posting political messages on Facebook and Twitter have any effect on the thinking of the American public.

In addition to ‘inauthentic ads’, Facebook has also flagged and included legitimate ads that originated in Russia or even “those with very weak signals of a connection and even legitimate ads not associated with any known organized effort.“ Facebook claims to have discovered 2,200 such ads worth some $50,000, which could have been ordered by anyone anywhere in the world, including within the US, with the only evidence that it was really run by a ‘Kremlin operative’ being that the account language was set to Russian. The point being, even if an ad has no political message whatsoever, an advertisement on Facebook – for Matrioshka dolls for example – can still be seen (if you’re delusional) as an “unknown organized effort” by the Kremlin to subvert America. We are reminded here, of course, of the type of thinking that prevailed in the Pentagon under Donald Rumsfeld during the Dubya years when Rummy asserted:

“Reports that say that something hasn’t happened are always interesting to me, because as we know, there are known knowns; there are things we know we know. We also know there are known unknowns; that is to say we know there are some things we do not know. But there are also unknown unknowns – the ones we don’t know we don’t know. And if one looks throughout the history of our country and other free countries, it is the latter category that tend to be the difficult ones”

Those ‘unknown unknowns’ sure are the most difficult ones, and the luminaries in Congress have their work cut out for them in finding the evidence of Russian influence in American politics, especially if they keep searching for that evidence in Facebook and Twitter ads.

For their part, Twitter executives reported in September that they had “tracked” 201 automated accounts to “Russian operatives”. Yesterday, when Twitter General Counsel Sean Edgett was grilled by 84-year-old Senator Dianne Feinstein, he increased that number to over 2,700 automated “Russia linked” accounts that made 1.4 million tweets. Twitter had already stated that those tweets amounted to 0.74% of election coverage on Twitter and they “consistently underperformed” relative to other tweets. Despite this, last week Twitter announced (no doubt in advance of the recent Congressional hearings) that it was banning ads from ‘Russian-sponsored news sites’.

Just for the record, here’s an internal Twitter memo where Twits (that’s what Twitter employees are called) discuss offering RT up to 15% SOV on US election advertising (SOV = Share of Voice, i.e. share of all ads run on that topic on Twitter). 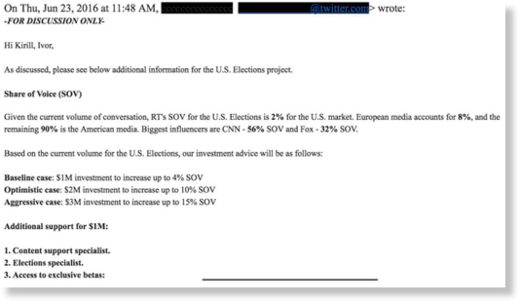 At the time (June 2016) RT’s SOV was a measly 2% with CNN and Fox getting almost 90% between them. The cost to ramp up RT’s share was $3million, but RT decline and, presumably, stuck with its 2% share. Still, that 2% (along with their similar coverage on FB) was enough to reach and manipulate the minds of millions of Americans. How did they do it? Prepare yourself.

Below are some of the best examples of the FB posts and ads that were used by a hoard of Russian hacker-trolls living in a giant Soviet-era concrete bunker subsisting on nothing but buckwheat blinis and pictures of Vladimir Putin (yes, they ate the pictures for strength). These are just a few examples that were presented by Facebook executives to Congress yesterday. Here’s the first: 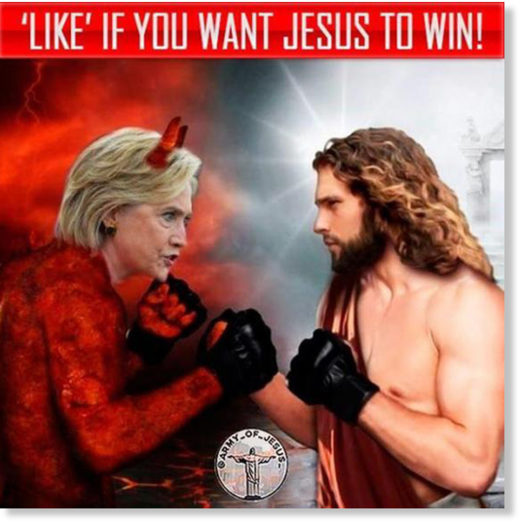 As you can see, this has ‘Kremlin’ written all over it. Only a deviant Commie mind could come up with this kind of propaganda, pitting Jesus against a horned Hillary in an epic shakedown. It is unthinkable that any person or group in the USA would have been able to come up with the concept of Hillary representing evil and Trump representing traditional Christian values, and certainly there is no chance that any person in the USA posted anything similar to FB, at least until they saw this advert first, and then perhaps copied it, their minds already infected by the pernicious Soviet propaganda.

Here’s the next example presented to Congress. 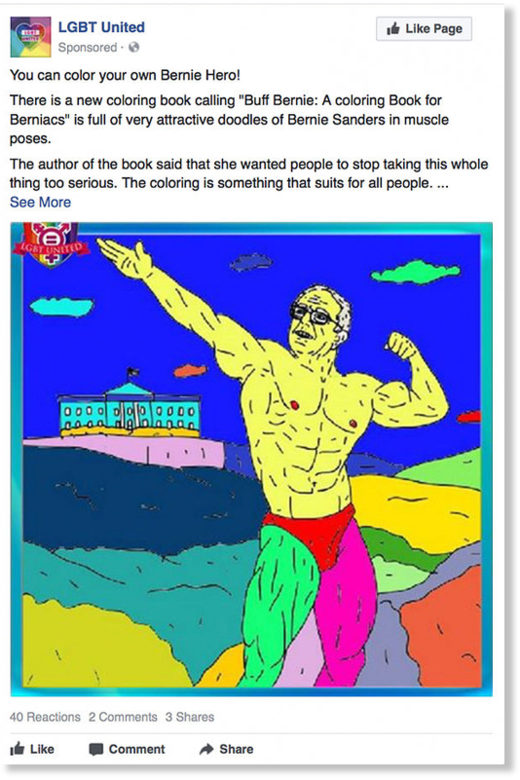 Above you see a macho rainbow-colored Bernie Sanders being promoted by a FB page called ‘LBGT United’. If you can’t see how this turned so many voters towards Trump, then there’s something wrong with your brain and you should ask a member of Congress for help. 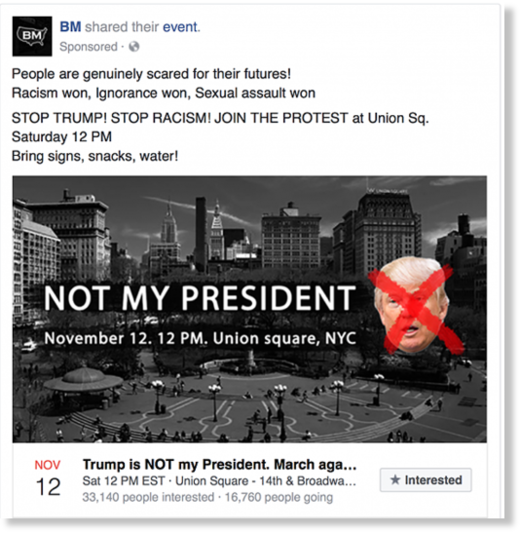 The above ad, presented yesterday to Congress, was promoted on FB a few days after Trump won the election. This ad is obviously of Russian government origin because who else but the Russians would think of dissing the president they got elected after he won in order to cover their tracks? Alternatively, this may be evidence of a secondary Russian goal: to destroy America from within. Given the overwhelming support among the American population for President Trump in the immediate aftermath of his win, the Russians needed to pull out all the stops to turn the American people against him in an effort to promote civil discord. Ads condemning Trump would never otherwise have appeared on the platform, and any that did appear (and that still appear today) are clear evidence of the hacking of the American mind by pinko Russian commies. I’m looking at you CNN.

The next two FB ads are shocking and lay bare Russian intent to destroy America by manufacturing something called ‘racial tension’ in the USA – a concept unheard of in modern America – and encouraging distrust between African Americans and US police officers. Again, this is something that did not exist in the USA before ads like these were callously projected into mass American consciousness via FB. 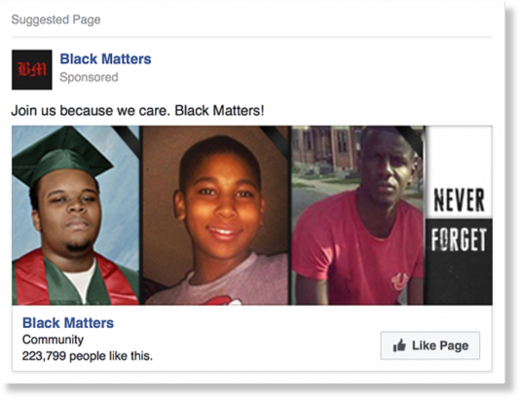 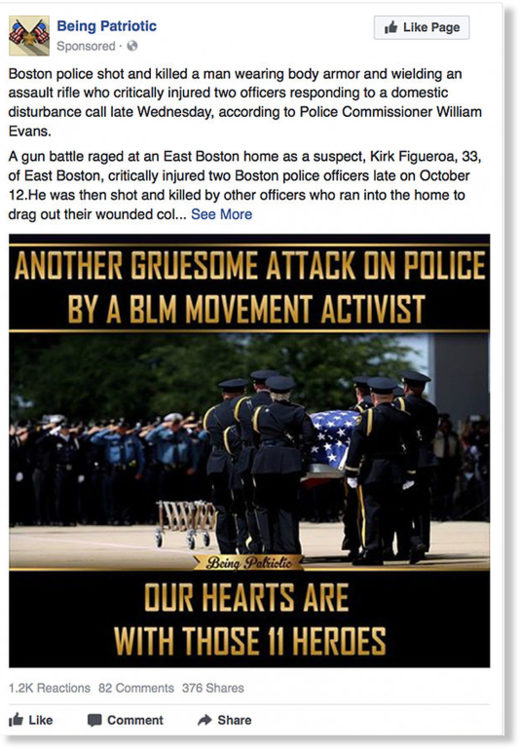 For quite some time, many people have believed that the problems in American social life are systemic and unique to America’s cultural make-up and history. Now however, thanks to the good folks in Congress and the Senate, the truth can be revealed: the Russians did it.