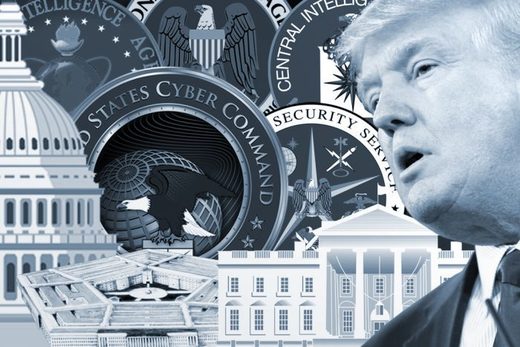 I sincerely hope that this is the very last time that I (or anyone else) will have to write about this topic. But here we go again.

New data has been added to the already sizable trove of evidence that clearly show that the FBI actively attempted to subvert American democracy by preventing Donald Trump from winning last year’s US presidential election. When Trump won despite the FBI’s efforts, the agency launched a ‘Russian collusion’ smear campaign against him in an attempt to hobble his presidency, in particular to prevent him from establishing closer ties with Russia and changing US foreign policy from one that promotes terrorism to one that fights it. Both of these measures would, of course, have been in the best interests of the American people.

In early November, the banana republic status of the USA was laid bare with the public acknowledgment that Hillary Clinton had in fact rigged the DNC primary to ensure that she won the Democratic nomination and a place in the Presidential election race. Clinton effectively stole her place in the Presidential election, rendering American democracy little more than a farce. Yet even before Clinton was hard at work securing the DNC win, the FBI was hatching a plot to ensure she also won the Presidency by deception.

Starting on July 10, 2015, then head of FBI counter-intelligence, Peter Strzok, led a team of a dozen investigators who examined Hillary Clinton’s use of a private email server. During the investigation, Strzok changed draft language in the report that described Clinton’s actions from “grossly negligent” (which would have been a criminal offense) to “extremely careless“.

In July 2016 it was Strzok who signed a document that opened the FBI’s investigation into an alleged “extensive conspiracy between Trump’s campaign team and the Kremlin“, and it was Strzok who converted that investigation into alleged Russian efforts to influence the 2016 election, including the alleged Russian role in the 2016 Democratic National Committee email leak.

In August 2016, just a few weeks after the opening of the ‘Russia collusion’ investigation by the FBI, Strzok wrote a text message to FBI colleague Lisa Page in which he made it clear that he was not prepared to “risk” a Trump win in the Presidential election and that he had an ‘insurance policy’:

“I want to believe the path you threw out for consideration in [Deputy FBI Director Andrew McCabe’s] office that there’s no way he gets elected – but I’m afraid we can’t take that risk. It’s like an insurance policy in the unlikely event you die before you’re 40 …”

In April 2016, it was Clinton campaign money that paid Fusion GPS to commission ‘former’ MI6 operative Christopher Steele to hand out money to alleged ‘Kremlin agents’ to provide the ‘intelligence’ that would become the steaming pile of horse manure known as the ‘Russia dossier’ that Steele personally compiled. Steele himself has stated that the dossier was given to the FBI “near the start of July 2016.” Fusion GPS was paid $1.02 million while Steele received $168,000 for the dossier.

It was Peter Strzok who analyzed that dossier and dressed it up as valid intelligence that he then used to obtain FISA court warrants allowing the FBI to spy on members of the Trump campaign as possible ‘Russian spies’.

For his part, Fusion GPS founder Glenn Simpson began peddling chapters of the dossier to Washington media outlets, most of whom were only too happy to believe its contents. Both Steele and Fusion GPS are currently the subject of libel lawsuits by Russian businessmen, a process that has revealed interesting information. For example, Steele has been forced to reveal that in September last year he also met with US media luminaries such as The New York Times, The Washington Post, Yahoo News, The New Yorker and CNN. The following month Steele delivered a second briefing to The New York Times, The Washington Post and Yahoo News. Now it has come out that Simpson and Steele were both friends with a top Department of Justice (DoJ) official, Bruce Ohr, whose wife actually worked for Fusion GPS. The conspirators appear to be sheltering Ohr, who was demoted last week without any public explanation.

Because Trump fired Comey in May this year for continuing this obnoxious charade, Deputy Attorney General Rod Rosenstein appointed Mueller, a former Director of the FBI, to continue the farce and investigate “any links and/or coordination between Russian government and individuals associated with the campaign of President Donald Trump“. In this capacity, Mueller hired Strzok to play a central role.

The point here is that it’s nonsensical to think that Strzok was not acting with the approval of ‘higher ups’ in the FBI. It is also highly unlikely that Mueller did not know that the entire ‘Russia collusion’ claim was entirely fabricated. Mueller was forced to remove Strzok from the investigation in July this year when his anti-Trump text messages were revealed. He has not, however, been reprimanded or punished. The FBI protects its own, regardless of their criminality or, in this case, treasonous acts.

As a result of the information revealed in recent weeks, some sanity and justice is now being brought to bear. Senate Judiciary Committee Chairman, Chuck Grassley, R-Iowa, tweeted yesterday:

Also yesterday, Deputy Attorney General Rosenstein was given a rather satisfying berating by Congressman Jim Jordan on Capitol Hill, where Jordan also made clear that the only appropriate course of action now is for the Mueller investigation to be dropped and a new special counsel investigation opened to uncover the whole truth.

The whole Russiagate “investigation” was based on the Fusion GPS dossier. Every lead seems to come back to that piece of tabloid fiction. But the dossier is now thoroughly discredited, and by extension, so are all those who took it seriously. Everyone connected – from the instigators, to those who facilitated the surveillance, to those who repeated its claims and used them as justification to ‘get Trump’ – is at risk of being exposed for facilitating this illegal witch-hunt spurred on by pure hysteria.

In short, no one comes out of this looking clean. Except Trump. Which is why the DoJ, FBI and Intel community are doing everything they can to draw attention away from their own complicity and conspiracy. Congressman Jordan is correct. The US needs a new special counsel – not to investigate imaginary Russian collusion, but to investigate the very real, and very extensive, collusion to manufacture a justification for taking down the democratically-elected president of the USA.