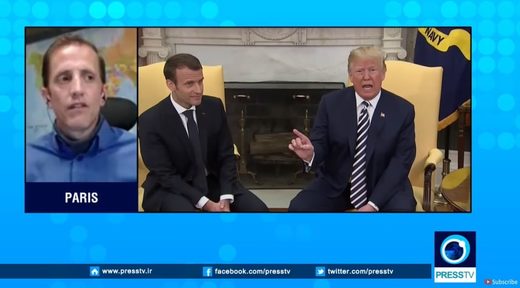 Behind all the cuddles and bisoux for the cameras, what was French boy-president Macron’s grande visite to the US of A all about? What the US and France can do to retain Western dominance of the Middle East, of course!

Trump is warning Iran not to “restart its nuclear program” while (again) yammering on about the 2015 JCPOA (Joint Comprehensive Plan of Action) multinational agreement on Iranian nuclear development being “an insane, terrible deal that should have never been made.”

Europe’s very own ‘stable genius’ meanwhile spoke out of both sides of his mouth in an attempt to tame Trump’s tantrum while not aggravating the Iranians, telling US officials the Iran deal can be “revisited” but should not be torn up. Iranian president Rouhani is meanwhile warning both of them about “grave consequences” if the 2015 deal is torpedoed.

What does all this bluff-and-bluster mean? And what is Trump’s beef with the JCPOA anyway? Needless to say, it has almost nothing to do with the ‘proliferation of nuclear weapons’…

Joe Quinn yesterday spoke with PressTV, explaining that European countries have a lot more business ventures in the pipeline – no pun intended – with Iran than the US does, something that the corporate owners of the US apparently didn’t bank on when they signed off on the deal in July 2015.

In addition, back then, they all assumed that Syrian president Assad was a dead man walking, and it did indeed, at that point, look that way. With the ‘Shia Crescent’ from Lebanon to Iran broken in two by knocking out Iran’s key ally in Damascus, the Americans, Israelis and Saudis were confident that they could control Iran’s economic development – up to and including dictating the terms of gas/oil and infrastructure deals. They may even have been in the planning stages of next knocking out the Iranian government by spreading proxy war from ‘Islamic State’ across the Iranian border.

But then, three months after the conclusion of the JCPOA, the Russian military – at Assad’s invitation – intervened in Syria, beat ISIS senseless, rescued Assad, strengthened inter-regional cooperation between Tehran, Baghdad, Damascus and Hezbollah, and thereby turned the Iran deal – from the perspective of America and its regional allies – into “the worst deal, ever” because now Iran could strengthen ties with Europe through economic partnership while thumbing its nose at the US because Russia had its back.

This was the worst possible development for the US, Israel and Saudi Arabia, which is why they desperately want to ‘fix’ it, while they still can.

But can they? Again we see just how royally Russia screwed them all by intervening in Syria on September 30th, 2015…