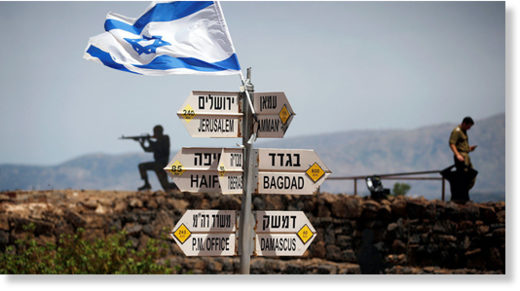 The Israeli government maintains that it attacked dozens of “Iranian military sites” in Syria late Wednesday night in response to the alleged firing of 20 rockets by Iran at Israeli military bases in the Golan Heights. There is, however, no evidence that Iran or anyone else in Syria launched any “rockets” at Israeli targets in the Golan, although that claim served as a useful justification for the Israeli attack on Syrian air defense positions, which did occur.

According to the IDF, “50 Iranian targets” in Syria were hit. Five Syrian SA-22 (Pantsir S1) systems were also struck due to the fact that these systems targeted the Israeli planes, or so the IDF stated. This claim is, however, dubious given that the SA-22 is chiefly designed to target low flying aircraft and, more specifically, cruise and other missiles that fly at extremely low altitude. It was these systems, in conjunction with older Soviet-era Syrian air defense systems – updated in recent years by the Russian military – that shot down about 70% of the cruise missiles fired at Syria last month by the US, UK and French militaries.

Learning from a previous attack that resulted in at least one Israeli jet being shot down, last night’s attack involved the use of mostly air-to-surface missiles fired from high altitude, well beyond the range of the SA-22 and other Syrian systems. So it’s unlikely that Israeli jets fired on these positions in response to any ‘barrage’ from Syria. It is much more likely that these targets were pre-defined by Israel, largely via satellite imagery.

According to the Russian Defense Ministry, Israeli forces bombed the Syrian territory for two hours between 1:45am and 3:45am local time on Thursday, using 28 Israeli F-15 and F-16 planes that fired around 60 air-to-surface missiles. Both Iranian military targets and Syrian air defenses were targeted. The IDF released footage from a camera mounted on one of the Israeli missiles as it approached what appears to be a Syrian SA-22 (Pantsir S1) air defense system.

Notice in the video above that one individual runs towards the SA 22 and appears to enter it while several others stand to the left, suggesting that the system was not ‘active’ at the time. Compared to last month’s 100+ cruise missile attack by the US, UK and France which was clearly signaled days in advance, Thursday night’s attack by Israel was a relative surprise and for that reason, likely met with more success than the cruise missile attack. Nevertheless, according to the Russian Defense Ministry, “Syrian air-defense systems shot down more than half of the rockets”.

Regardless of the true successful hit-rate of the Israeli air-to-surface missiles, it seems clear that the attack was an attempt by the Israeli military – sanctioned by and in partnership with the US military – to take out the Russian-supplied/upgraded Syrian air defense systems that rendered Trump’s nice, new and smart cruise missiles largely ineffective last month.

Israel’s plausible ‘moral’ justification to attack “Iranian military targets” in Syria is a useful ruse to attempt to achieve the real goal: the defeat of the Syrian army and removal of Assad, which also remains (at least in some ‘deeper’ departments of the US establishment) the primary goal of US foreign policy in Syria.

It is a testimony to the complexity (not to mention the distastefulness) of the ‘great game’ of global geopolitical ‘chess’ being played out across the globe by the ‘great powers’ that, one day before Israel attacked Russian/Syrian air defenses in Syria, Israeli Prime Minister Netanyahu was President Putin’s VIP visitor at the Russian Victory Day parades.

Even before he was president, Trump made it clear that he thought the Iran deal was “bad”. Being a businessman and focused on “making America great again”, it seems reasonable to conclude that his viewpoint was from a business perspective. The Iran deal eased sanctions on Iran for non US companies and citizens only. As a result, most of the increase in trade in the almost 3 years since the deal was signed has been between Iran and European, Chinese and Russian businesses. European imports and exports with Iran are almost back to pre-sanction levels and there is a lot of investment potential there. 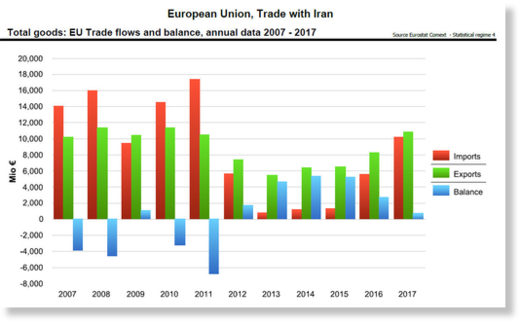 Trump sees the Iran deal as having squandered America’s potential influence over Iran, which is why he wants to “renegotiate it”. The plan involves reimposing the extremely punitive sanctions – including against anyone doing business with Iran – that were previously in place, as supposed leverage on Iran. The problem is that this plan involves the US sanctioning America’s allies, particularly those in Europe, which in turn implies a significant break in the 70-year-long ‘special relationship’ between Europe and the US where Europe played a definite second fiddle to America’s bullhorn.

But that’s not the whole story. Obviously there is significant Israeli influence on Trump, as there has been on US presidents going back a long time, and Israel is very concerned about growing Iranian influence in Syria because it poses a direct threat to Israel’s disproportionately powerful position in the Middle East. The same goes for Saudi Arabia. These problems have everything to do with Russian intervention in Syria in October 2015. The Iran deal was signed in July 2015, at a time when the Syrian government was expected to fall, dealing a significant blow to the so-called “Shia crescent” from Lebanon to Iran and therefore Iran’s ability to expand its influence. But since the Russian intervention, that situation has been completely turned around, Iran has been empowered in the region, not to mention the powerful role Russia is now playing there.

So what we seem to be looking at here is an alignment of Trump’s “show me the money!” foreign policy model and Israel’s policy of ‘containing’ Iran at all costs. The fact that John Bolton – an inveterate war hawk and believer in American exceptionalism and the US’ manifest destiny – has just become Trump’s national security advisor merely adds fuel to the fire.

But despite the continuing “WW3!” scaremongering from the mainstream media and, I’m sorry to say, much of the ‘alternative press’, it’s unlikely that events will escalate into a major military conflict between nuclear-armed nations. There will likely be more Israeli strikes on Syria as both the US and Israel (and Saudi Arabia) pursue their regime change goals in Syria by other means, but the new emerging powers in the Middle East need only respond by protecting their vital interests and judiciously allowing that new reality to emerge naturally.

The triumvirate of the US ‘deep state’, Israel and Saudi Arabia, on the other hand, are facing an ‘existential’ struggle to retain their increasingly tenuous domineering position in the region. The real problem for them is that they really aren’t fighting against any nation state or ideology (despite what they claim) but rather the reality of a new natural order manifesting itself across the globe. And people who try to wage a war against an emerging natural order, or reality itself, are always going to (eventually) lose.