Yesterday, Trump tweeted: “Our GREAT MILITARY has delivered justice for the heroes lost and wounded in the cowardly attack on the USS Cole…”

On 12 October 2000, while sitting in the port of Aden, Yemen, the USS Cole was allegedly attacked by some guy called al-Badawi and his accomplices. A small boat was allegedly loaded it with approximately 500lbs of explosives and some ready-made suicide bombers who then drove it alongside the Cole and…Kaboom. Below is a photo of the damage to the ship. 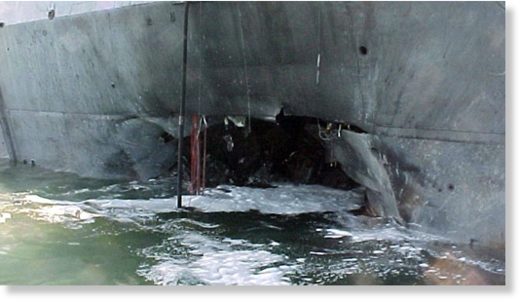 Media reports initially claimed that “conventional explosives” were used. That was generally understood to mean something like a ‘fertilizer bomb’ sufficiently unsophisticated for non-state actors and in keeping with attacks by others groups.

Here’s an image of the damage caused by a typical 500lb ‘fertilizer bomb’. The bomb explodes outwards and upwards in all directions and the damage is widespread. 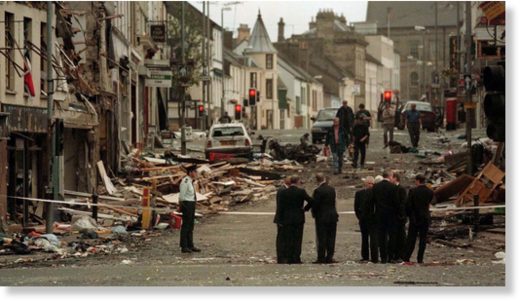 As you have probably realized already, the damage to the Cole didn’t fit the profile of such a bomb, so soon after the attack the narrative changed:

Officials said examination of the Cole indicated that the explosive used was even more sophisticated than initially thought. The penetrating force and the damage deep in the interior strongly suggested that the bomb was a “shaped charge,” designed to focus the explosion rather than allow it to spread in all directions, as with a typical truck bomb, officials said.

“With every piece of information, it becomes a more sophisticated operation,” one official said.

The officials have not disclosed the specific type of device used, though the use of a directed explosive led to speculation that the device operated like an warhead. Such a device is a more sophisticated weapon than those used by most terrorist organizations, and possibly came from a military stockpile.

”I can’t think of a major terrorist operation that has involved, essentially, hardware of that magnitude,” said Daniel Benjamin, a former terrorism analyst on the National Security Council and now a senior fellow at the United States Institute of Peace in Washington.

At the time, the BBC reported that: “the [Yemeni] president said samples of explosives taken from the destroyer had been identified by US investigators as of a type available only in Israel, the USA, and two Arab countries” (two Arab countries that get it from the US or Israel). He further stated: “we believe Israel might be involved in such incidents.”

As noted by US officials above, it is beyond doubt that a sophisticated military-grade shaped charge explosive was used against the Cole, but the idea some jihadis could have made such a device at home is highly implausible. To do so, they would have had to first procure and then mold up to 500 x 1.25lb bars of military-grade C-4 explosive into a fairly complex shaped charge device complete with a PETN-based detonating cord and then successfully direct it at the side of the Cole from a ‘small boat’ in the port of Aden.

The question of how said jihadis could have sidled up to the Cole undetected is equally perplexing. Adm. Vernon Clark, the chief of naval operations at the time, argued that because the small boat was involved in the mooring, the crew of the Cole had no reason to suspect anything was amiss. “The reason that a ship, a small boat like this, could get in this proximity to the USS Cole is that it was part of the party, the support party that was assisting the ship in tying up to their berthing position,” Clark said in an interview with CBS News.

Later however, other Navy officials disputed the Admiral’s claim by stating that the Cole had been berthed for more than 90 minutes before the explosion occurred, leaving unexplained how the alleged boat bombers could have approached the ship undetected. That is, if there were any boat bombers at all. Indeed, there were no reports of anyone seeing a ‘small boat’ approach the Cole at any time after it had berthed. This was a narrative added after the fact to explain what happened.

The dingy bomber theory has persisted to this day however, and while it is true that 400-700lbs of military explosive would have been needed to create the 40×20 feet hole in the Cole, note that at least half of the damage was below the waterline. 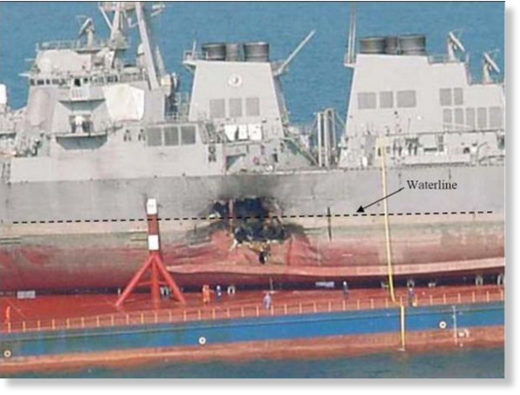 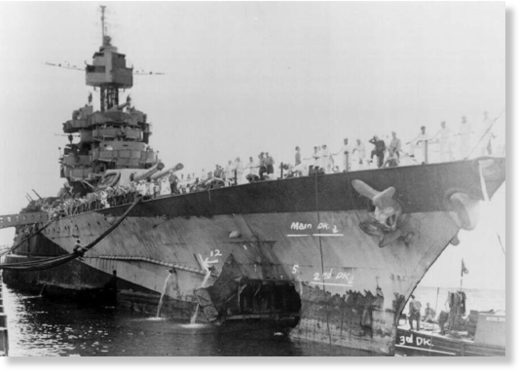 It is much more likely that either a torpedo or mine caused the damage to the Cole, which rules out jihadis as the culprits. But the ‘jihadis in a dingy’ narrative was necessary for obvious reasons. This was, after all, just 11 months in advance of the 9/11 attacks, and a pattern had to be established. Indeed, then Defense Secretary William S. Cohen used the bombing to further establish Bin Laden’s credentials as an arch terror chief. Cohen stated: “investigators were looking at anti-Western guerrilla groups, including exiled Saudi dissident Osama bin Laden.”

Further investigations into the Cole attack eventually turned up a group of likely suspects, many of whom were veteran Muslim fighters of the war in Afghanistan and Bosnia where they had essentially been recruits of the CIA.

“Six Yemeni suspects in the bombing of the USS Cole have been identified by sources close to the investigation, who say they share a background as fighters in the anti-Soviet war in Afghanistan in the 1980s. Jamal al-Badawi, the most senior of the 6 suspects jailed in Yemen told investigators he received telephone instructions for the Oct. 12 bombing from a man in the United Arab Emirates, the Yemeni sources said.. Al-Badawi said he had met the man in Afghanistan during the war but had not seen him since, the sources said.”

“Investigators in Yemen say they hold six suspects in the bombing of the USS Cole. All six are said to be Yemeni veterans of the Afghan war against the Soviets. The main suspect was identified as Jamal al-Badawi.””The network also said another suspect, Jamal al-Badawi, admitted to investigators he trained in bin Laden’s guerrilla camps in Afghanistan and was sent with bin Laden’s forces to fight in Bosnia’s civil war. ABC News said the suspects’ stories provide the first direct links between bin Laden and the Cole bombing.” Jamal al-Badawi, regarded as the most senior of the Cole suspects who have been arrested, told investigators that he received telephone instructions for the bombing from Mohammed Omar al-Harazi in the United Arab Emirates. Badawi said he had originally met Harazi in Afghanistan during the war.

Former FBI assistant director John O Neill spent many years attempting to understand the real nature of “radical Islamic terrorism” and its threat to America. On October 14th 2000, two days after the attack on the Cole, O Neill led a 200 strong team of FBI agents to the site of the attack. Sadly, O Neill’s investigation did not get very far, yet it was not, as we might expect, Yemeni authorities that stonewalled O Neill, but rather the US’ own ambassador to Yemen, Barbara Bodine.

O Neill and most of his team were forced out of Yemen by Bodine less than a month after their arrival. O Neill was prevented from returning to Yemen by the incoming Bush administration. Now why would the US ambassador to Yemen, and by implication the Clinton and Bush governments, want to prevent an FBI agent from investigating the bombing of the USS Cole? More to the point, why would the CIA refuse to give O Neill information that could have connected the people allegedly involved in the bombing of the Cole and the 9/11 attacks less than a year later?

You see, Fahad al-Quso, like Badawi, was originally arrested in December 2000 by Yemeni authorities who claimed he too was involved in the attack on the Cole. O Neill was aware of this and was desperate to interview the man, who he believed had important information to divulge. Yet due to the fact that he had been effectively barred from Yemen by his own government, O Neill could do nothing. The really interesting point here is that the CIA already knew that, in addition to being involved in the USS Cole bombing, al-Quso had been at a January 2000 meeting in Malaysia with two other alleged members of al-Qaeda by the names of Nawaf Alhazmi and Khalid Almihdhar.

You probably don’t remember these two names, and you really aren’t meant to, but if you were to ask Dick Cheney, for example, he would tell you that those two “al-Qaeda” members were two of the alleged hijackers of Flight 77 that is alleged to have hit the Pentagon on September 11th 2001. For some reason however, the CIA refused to provide O Neill with the information about the Malaysia meeting, information that would probably have allowed him to connect the people involved in the attack on the Cole to preparations for the 9/11 attacks.

Unable to tolerate the obviously deliberate attempts to block his investigations, O Neill resigned from the FBI in mid 2001. Soon after, he was offered and accepted a job as security chief at the WTC in New York. He started work on the 34th Floor of the WTC North tower on August 23rd 2001. On September 11th, he escaped the initial impact of Flight 11 into the North tower, but was apparently killed in the collapse. For more on John O Neill and what he knew and what was suppressed, see the PBS Front line documentary: ‘The Man Who Knew‘

As a result of the attack on the USS Cole, the USA went from having no presence in the strategically important country of Yemen, to having a permanent mission there, with hundreds of personnel. From a geopolitical perspective, the bombing of the USS Cole is very similar to the sinking of the ROKS Cheonan in 2010. Both were carried out specifically to advance US imperial interests in the Middle East and Asia respectively, with the bombing of the Cole having the added twist of being directly related to the 9/11 attacks. Of course, the 9/11 attacks were perpetrated to provide justification for the largest projection of imperialistic power the world has likely ever seen.

In short, if Trump is going to tweet about historical events, he really should clue up on the facts.