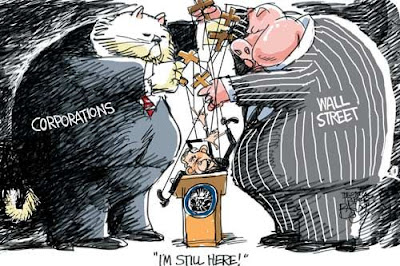 Many civil liberties groups in the US are up in arms over Thursday’s Supreme Court ruling in Citizens United V Federal Election Commission, that gives corporations free reign to spend as much money as they can afford (which is a lot) to influence American political election outcomes. This is the same gaggle of Supreme Court Justices (more or less) that gave us, literally, the glorious reign of George Dubya Bush. MSNBC’s Keith Olbermann dedicated one of his ‘special messages’ to the ruling which he said made all US politicians ‘prostitutes’ to big corporations.

Here’s the relevant part of the ruling:

The relevant factors in deciding whether to adhere to [precedents] beyond workability – the precedent’s antiquity, the reliance interests at stake, and whether the decision was well reasoned – counsel in favor of abandoning Austin, which itself contravened the precedents of Buckley and Bellotti. As already explained, Austin was not well reasoned. It is also undermined by experience since its announcement. Political speech is so ingrained in this country’s culture that speakers find ways around campaign finance laws. Rapid changes in technology – and the creative dynamic inherent in the concept of free expression – counsel against upholding a law that restricts political speech in certain media or by certain speakers.

In addition, no serious reliance issues are at stake. Thus, due consideration leads to the conclusion that Austin should be overruled. The Court returns to the principle established in Buckley and Bellotti that the Government may not suppress political speech based on the speaker’s corporate identity. No sufficient governmental interest justifies limits on the political speech of nonprofit or for-profit corporations.

Forgive me if I can’t find it within me to get worked up over a ruling that allows multinational corporations to legally do that which they have been doing for many years. Has everyone in the US suddenly forgotten the word ‘lobby’? Or the fact that almost every member of Congress has, at some point, been bought and paid for by corporate lobby groups? Go to the Open Secrets web site and pick any congressman or woman or senator you like and see for yourself. Is there a difference between direct or indirect corporate influence of politicians and those same corporations spending money on, say, advertising to influence the same politicians? Up until now, corporations had to be satisfied with donating large sums of money to candidates that the candidates then used to run their campaigns, i.e. electioneering etc. Now the corporations can run the campaigns of candidates themselves. I can see it now, John Doe, presidential nominee, ‘sponsored by Coca Cola’. You like Coca Cola, right? Well you’re gonna LOVE our candidate!

And let’s be clear that influencing US politicians today is an activity that is owned, lock, stock and pork barrel by the corporations, because corporations effectively dictate government policy in the US. Unions have long since been neutered and lobby groups that actually represent ordinary people simply don’t have the financial clout to make any difference. It’s all about money in the land of the free market capitalist corporation and banker.

So what, in real terms, has changed? Nothing. So what’s the problem? Is it that corporations can now openly advertise for or against candidates for office at all levels, and in that way influence public opinion? Don’t worry about it! Because it’s not who gets elected (or appointed as the case may be), but rather the amount of money it takes to bribe them when they attain office.

My only gripe however is that the Supreme Court didn’t go ahead and ‘corporatize’ the state of Israel and the Israel lobby in its ruling and declare them eligible to legally manipulate, bribe and blackmail US politicians to ensure a continuing Israel-friendly US foreign policy.

Getting worked up over the Supreme Court ruling is akin to fretting over the door of the barn being unlocked while ignoring the fact that the barn itself is on fire. But the hubris doesn’t stop there. Not only are many deluded US-centric individuals and activist groups concerned about native corporations being let off their very long leash, but there is now also the looming specter of, horror of horrors, foreign corporations and governments muscling in on the farce that is the US political process!

The biggest questions with this ruling is the scope of the term “corporation,” says Edward Foley, law professor at the Ohio State University College of Law and director of the election-law program. Does the high court want this decision to apply to foreign corporations as well as domestic ones, he ponders? The truth is, the court didn’t make a decision one way or the other.

Foley best explains the potential issues by talking about the electronic, video, and communication giant, Sony. The corporation is headquartered in Japan, but a large number of its shareholders reside in the United States. In fact, people can even buy and trade Sony’s stock on the New York Stock Exchange. The issue is whether this corporation, with strong ties to a foreign country and the United States, should be permitted to independently contribute money to presidential and congressional campaigns.

The Center For Public Integrity carried the headline:

it’s one thing for U.S. firms to have their say. What about foreign companies that operate U.S. subsidiaries? Many of these, like American businesses, are owned by ordinary shareholders – but a host of others are owned, in whole or in part, by the foreign governments themselves.

One prominent examples is CITGO Petroleum Company – once the American-born Cities Services Company, but purchased in 1990 by the Venezuelan government-owned PetrÃ³leos de Venezuela S.A. The Citizens United ruling could conceivably allow Venezuelan President Hugo Chavez, who has sharply criticized both of the past two U.S. presidents, to spend government funds to defeat an American political candidate, just by having CITGO buy TV ads bashing his target.

Given that the US has for many years been a global empire, it seems only fair that some of its subjects should have a say in, or exert an influence over the deliberations of the empire builders. Isn’t Hugo Chavez due a little payback after the CIA tried to oust him in 2002? If it were able to, what kind of influence might Venezuela exert on the US politics and the lives of 300 million Americans? Free health care and third level education for all perhaps? Or subsidized gas in the winter time at least? Would that be a bad thing for the more than 10% of US citizens living below the poverty line?

And what about the Saudis? Well, they’re unlikely to stray far from the Neo-Liberal script, but they might nudge US politicians towards a more equitable treatment of Middle Eastern Arab states. They might even encourage the President not to invade any more Arab nations and to lay off slaughtering their people. Again, is that a bad idea? It is a bad idea that other nations would be in a position to check the power of the US military-industrial complex and forestall the worst of its excesses? Personally I think it’s a great idea, but its unlikely to happen, mainly because the Supreme Court ruling does not explicitly allow it and can therefore prohibit it at any stage, which it would very likely do, if US corporations paid the Supreme Court Justices enough money.

So there’s nothing to see here folks, other than the next logical step along the path that the USA began many years ago when everyone ignored Eisenhower’s warning about the threat from a military industrial complex. If that explanation doesn’t satisfy you, then just think of the US political scene as being a bit like Haiti is today, and as in all such wastelands of despair, the corporate vultures waste no time in finding a way to profit.