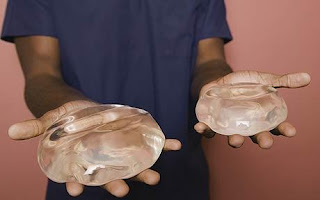 Back in February this year, we were treated to the ridiculous story of ‘Terrorists With Explosive Breast and Implants‘, although at that point the story appears not to have been given much in the way of wide-spread coverage.

Fast forward to the end of March and amid reports that the images of your private parts taken by airport scanners are not exactly private and resistance to the use of the scanners on the rise, the follow story broke:

A security worker at London’s Heathrow Airport has received a police warning and faces disciplinary action over claims he ogled a female colleague using a full-body scanner, officials said yesterday.

The 25-year-old worker made lewd comments after his colleague Jo Margetson, 29, mistakenly strayed into the scanner, which can see through clothes to produce an image of the body, the Sun newspaper reported.

Ideally this story would have been used by the mainstream press to represent the growing public consensus that the scanners are a serious breach of privacy, but this is no ideal world, and the mainstream press has long since been little more than the government’s press office. The very same day then that the ‘Ogling’ story broke, for some cynical reason, mainstream media outlets chose to revisit the ‘Boob bomber’ with a vengeance. Google “breast implant bomb” and you’ll see that virtually all reports are from the 24th and 25th of March.

As to the very idea of boob and butt bombers, that apparently came courtesy of England’s private army, MI5/MI6, by way of right wing pundit and editor of Worldnetdaily Joseph Farah who originally published the claim on his news outlet back in February. Apparently Farah then spoke to the UK Sun tabloid newspaper and the story got new legs, breasts and buttocks. The Sun reported that, after the Christmas knicker bomber farce, MI5 “picked up chatter” that led them to the belief that boobs might be the new bombs. If this is true, then it’s probably not, given that English ‘intelligence’ agencies have a long track record of telling humongous porkie pies about terrorism.

Clearly the crotch bomb was a failure. Would boob or buttock bombs fare any better? It’s unlikely. First of all is the fact that the would-be bombers body would absorb most of the blast. Secondly you have the problem of how to detonate the fantastical device. “Excuse me madam, what is the purpose of those wires attached to your bosom?” You get the picture. It’s all for your entertainment, or your brainwashing, depending on how informed you are.