Why do Palestinian armed resistance groups consistently make such a hash of effective resistance? Such groups regularly launch impotent rockets towards Israel, supposedly in an effort to win freedom from Israeli occupation, only to have said ‘rockets’ land (almost always) harmlessly in the desert. To add insult to injury, such attacks are then used by the Israelis as justification to respond, in a massively disproportionate way, with their deadly US-made missiles against the Palestinian population as a whole.

On virtually every occasion when a ‘Middle East peace deal’ has provoked a bout of existential jitters among the Israeli elite because it looked like it might actually force them to the negotiating table, some ‘armed Palestinian group’ has obligingly carried out some misguided attack against an Israeli target, or launched a few Qassam’s  at the Israeli desert. Who then can argue that, overall, the Palestinian’s long struggle for independence has been a lesson in how to shoot oneself in the foot, over and over again.

Take this latest report from the beleaguered Gaza strip ‘open-air prison’ for yet another example of this dynamic: 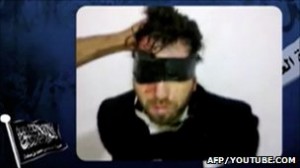 An Italian pro-Palestinian activist has been found dead in the Hamas-governed Gaza Strip hours after being abducted.

Vittorio Arrigoni, 36, was seized on Thursday by a radical group that has been in conflict with Hamas and is seeking the release of its leader.

Police said he was found hanged in a Gaza City house after receiving a tip-off. Two people have been arrested.

Italy denounced the “barbaric murder”, calling it an “act of vile and senseless violence”.

Mr Arrigoni was the first foreigner kidnapped in Gaza since BBC journalist Alan Johnston was abducted in 2007.

Friends of the activist gathered outside the hospital where his body had been taken on Friday morning.

“He came from across the world, left his country and family and his entire life and came here to break the siege, and we kill him? Why?” asked one of his friends.

Initially the murder was blamed on the little-known ‘awheed and Jihad group’,  an alleged ‘extremist’ clique in Gaza who, “it is thought” were attempting to force Hamas to release the group’s leader, Sheikh Abu Walid-al-Maqdas, a Jordanian Palestinian who was arrested last month. However, as is so often the case with these little-know groups that spring up out of nowhere, Tawheed and Jihad later claimed it was not responsible for the murder.

As for Hamas: at the rally in honour of Arrigoni on Friday, Mahmoud Zahar, a Hamas leader, said the Italian and other foreign activists were “our friends” and the perpetrators would be punished. He indirectly accused Israel of engineering the killing to intimidate foreign activists seeking to sail to Gaza to protest against a naval blockade of the territory. “Such an awful crime cannot take place without arrangements between all the parties concerned to keep the blockade imposed on Gaza,” Zahar said.

So “Why?” Indeed! What could the Palestinians or their cause possibly have to gain from the murder of a man like Vittorio Arrigoni? For several years Vittori had been both vocal defender of the Palestinian cause and an unrelenting critic of Israeli oppression of the Palestinian people. With Vittorio’s death, the Palestinian people have lost an ally and friend and one of the few ‘Westerners’ willing to live and fight for freedom alongside them. But even as Palestinians in Gaza mourn Vittorio’s death, they must also deal with the fact that they themselves, as a people, are being blamed (subtly and not so subtly) for his death. Imagine for a moment that a very close friend, or a relative, is brutally murdered and that you are blamed for it. That’s the unfortunate position in which the Palestinians find themselves today.

On the other hand, the Israeli government must be feeling rather content today. The long-term Israeli propaganda offensive that seeks to cast the Palestinians as a people bent on violence for its own sake and quite unable to recognise the difference between friend and foe has been reinforced by Vittorio’s murder. If you accept such Israeli propaganda as truth, then the question of “why?” has been answered. If, however, you believe that the first question to ask in such situations is ‘cui bono’ and if you suspect that there is probably more to this than meets the eye, then your question might be more along the lines of “how?”

The alternative answer to that presented by Israel and the mainstream media is in fact readily available:

Rima Merriman, a Palestinian American living in Ramallah, wrote this series, “Portraits of Palestinian Resistance”, telling the stories of the four Palestinians killed and one of the 57 wounded in Ramallah on 24 May 2006, as they struggled to protect a Palestinian activist and political prisoner from an Israeli undercover unit.

Palestinian resistance to the occupation comes in many shapes and forms, some of which involves armed resistance undertaken by organized groups with various ideologies. These groups are composed of barely trained young men who pit their meager and crude resources against one of the best trained and best equipped military body in the world, the Israeli Occupation Forces. Of the 76 Israeli soldiers who died in 2005, only six were killed as a result of Palestinian attacks. The rest died of illness or accidents. Thirty of them committed suicide.

The imbalance in the resources between the two sides of the conflict predictably yields a steady mowing down on the part of the Israelis of one young Palestinian martyr after another. Most Palestinian deaths, however, are of civilians (and children) simply going about their daily lives, getting caught up in Israeli ground and air attacks, Israeli indiscriminate fire and Israeli raids.

Israel’s control of and entrenchment in the West Bank and Gaza Strip, its continual attempts to stamp out Palestinian resistance to the occupation at any cost, relies heavily on intelligence gathered by Shabak, the 5,000-strong Internal General Security Service of Israel, whose motto is “Defender who shall not be seen”.

With a cadre of well-trained, Arabic-speaking Israeli informants who are indistinguishable physically from the Palestinian population, Shabak has little problem gathering intelligence on a people whose every movement is regulated by hundreds of check points and by total Israeli control on their borders. These infiltrators prey on Arab innate hospitality and friendliness. The Palestinians call them “musta’ribeen”, i.e., “those who appear to be Arabs”. Palestinians are not surprised when someone, somewhere comes up to them and says: Got you!

My point being that the Palestinian armed resistance groups have long ago been infiltrated by Israeli agents and it is very likely that many, if not all of the new and ‘previously unknown’ ‘Palestinian groups’ are in fact Israeli agents who are tasked with creating the ‘reality’ of Israeli anti-Palestinian propaganda.

Here are a few more links that put the truth of my contention beyond doubt:

2 thoughts on “Those Crazy Palestinians…”