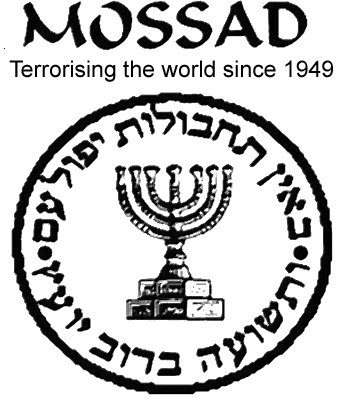 As a rule, Israel (“that shitty little country” according to a former French diplomat), only wages conventional war as a last resort, and even then, unlike the US of A, it lacks the manpower to invade and occupy foreign nations and must limit itself to blunt force bombing runs (or attacking Palestinian fishermen with gunboats). But the fact is that Israel doesn’t need to expend vast resources on conventional war, because there is another, equally (or perhaps more) effective way for such a pathologically-driven apartheid state to achieve its twisted objectives.

Yep, that’s right, ‘by way of deception’, or the ‘horse’s head in your bed’ school of diplomacy. To say that the Israelis are rather adept at this particular ‘art’ form is something of an understatement. Over the last 60 years, the Israeli elite have done more than any other group to successfully portray (to white Westerners) every single Muslim as potential ‘suicide bomber’. Their chosen method to achieve this screwed up state of affairs has been to manufacture ‘suicide bombings’ and then conveniently allow (or help) the blame to fall on some Muslim group. Of course, they’re also experts at covert assassination of innocent people, like Iranian scientists.

Basically, while the American’s chosen form of coercion is bombs, the Israelis believe that inducing psychological terror is the best way to achieve an objective. Israeli efforts at manipulating public perception involve the use of violence of course, but it is violence wrapped in a lie so insidious that even the victims are hoodwinked as to the identity of their aggressors.

Which brings me to Oslo. I’ll go out on a limb here and assume that you’re not naive enough to buy the ‘lone nut’ explanation and just move on to the evidence for an Israeli signature all over the attacks a few days ago.

The bomb in Oslo targeted the Norwegian oil ministry building.Less than a year ago, the Norwegian government announced that it would no longer be using Norway’s massive oil income (the Norwegian people’s money) to invest in Israeli companies involved in building Israeli settlements on Palestinian land.

Over the past few years, the ruling Norwegian Labour party has been taking an increasingly vocal stand against Israeli aggression against Palestinians. For example, as far back as 2006 the then Norwegian finance minister was backing a planned consumer boycott of Israeli goods. Which provoked Condi Rice to threaten Norway with “serious political consequences”.

The teenagers who were camping on Utoya island were members of the AUF (Norwegian Labour party’s youth movement). Two days before Anders Behring Breivik would run amok and kill many of the teenagers in cold blood, they met with Foreign Minister Gahr Stoere and demanded he recognise Palestine. On the same day the AUF’s leader Eskil Pedersen gave an interview to the Dagbladet, Norway’s second largest tabloid newspaper. The newspaper described the AUF in this way:

“The AUF has long been a supporter of an international boycott of Israel, but the decision at the last congress, demands that Norway imposes a unilateral economic embargo on the country and it must be stricter than before.”

The AUF leader is quoted as saying:

“The [Middle East] peace process goes nowhere, and though the whole world expects Israel to comply, they do not. We in Labour Youth will have a unilateral economic embargo of Israel from the Norwegian side. I acknowledge that this is a drastic measure, but I think it gives a clear indication that we are tired of Israel’s behaviour, quite simply”.

Norway is not alone in toying with the idea of a consumer boycott of Israel, nor is it alone in its support of Palestinian statehood (several other Nordic nations have followed suit in recent months) but Norway does stand alone (in the Western world) in the fact that it has vast oil reserves and appears to have been toying with the much more threatening (to Israel) idea of what amounts to an oil boycott of Israel.

As for the mass murderer Breivik, all the evidence suggests that he is indeed a ‘crazy person’, but that in no way explains how he could have pulled off these highly coordinated attacks alone. What it does suggest is that he fits the profile of a ‘mind programmed patsy’ who had lots of help from people with a lot of resources and a thinly veiled agenda to send a strong (if covert) message to the Norwegian government and people.

The judge hearing the case against Breivik said that Breivik wanted to create “the greatest loss possible to Norway’s governing Labour Party”, which he accused of failing the country on immigration and opening the door to the “Muslim colonization” of Norway and all of Europe. We’ve already established that Israel has a serious beef with Norway’s governing Labour party, and who, pray tell, has been at the forefront of, and has most to gain from, the claims of an Islamic take-over of Europe? Who has the most to gain from the demonization of Muslims? Who has the most to gain from delivering an extremely traumatic message to the Norwegian Labour party and the Norwegian people, both of whom were growing increasingly anti-Israel?

There is also the interesting fact that initial reports claimed there were at least two shooters and that one of them had been arrested. All such reports have since disappeared from the mainstream media. Breivik was also wearing police uniform. Where did he get it? And why has no one linked the shooting two days later of a 27 year old man in his home in Sandnes, Norway by two masked men in military uniform?

I could go on about how, immediately after the attacks, the mainstream media zombie pundits blathered on about ‘al-Qaeda’ being the culprits, or how some Mossad agent accepted responsibility for the attacks in the name of ‘Helpers of the global jihad‘, but I trust you all already know that the ‘al-qaeda’ business is just so much bullshit.

BUT! In case that isn’t enough circumstantial evidence to convict, here’s another (admittedly more tenuous) piece of data. The attacks in Oslo and Utoya island came 65 years, to the day, after the original Zionist terror group Irgun, bombed the King David Hotel in Jerusalem. While all the other details strongly suggest an Israeli hand behind this particular act of inhumanity, perhaps the timing is the real Israeli ‘signature’. The bombing of the Kind David hotel was an attempt by Zionist terrorists to prevent foreign intervention in their plans for covert global domination. The attacks in Oslo and Utoya island fit the same profile.

So yeah, enough said. In fact, I’ve probably said too much, and could have just summed it all up by borrowing the words of a friend who opined on the topic:

“Something about this whole thing doesn’t make sense.

This is like a white supremacist going off his rocker and then shooting white people. Or a Jew who hates Palestinians going postal in a Synagogue!

You may say ‘the guy was mad, he didn’t know what he was doing, don’t look for sense in this’ but such politically motivated fanatical madmen have at least one basic and obvious method to their madness: they attack the object of their hate and not everything else apart from the object of hate…

It sounds to me like Breivik was most probably a ‘patient’ of ‘Dr. Greenbaum‘ but one that ‘went off’ at the wrong time or in the wrong way to such an extent that the ‘excuses’ the PTB are coming up with don’t even make basic sense.”