While millions of English intellectual and emotional zombies shuffled along to the beat of the English Queen’s recent ‘Jubilee’ celebrations, a real zombie apocalypse (of the flesh-eating kind) was taking place in the USA.

Over the course of the past two months, there have been no less (and probably more) than 18 cases of people eating, or otherwise misusing, their own flesh or that of others. Most of these bizarre events have, for some reason, taken place in the USA. The most prominent case was that of Rudy Eugene and Ronald Poppo in Miami, Florida. The basics of that case, which took place on May 26th, as described by a witness were:

“He [Eugene] was ripping into his [Poppo’s] face with his teeth,” said a witness to the ghoulish attack.

“He was ripping his skin, his neck. He had him held down. The guy couldn’t move really, and he was just tearing into his flesh,” Vega told WSVN TV in Miami.

The witness flagged down a police officer, who repeatedly ordered the assailant to stop and move away.

“The guy just stood his head up like that, with a piece of flesh in his mouth, and growled.”

When Eugene did not comply with the officer’s demands, he shot him once. Eugene, however, appeared unfazed, at which point the officer shot him four more times.

Serious efforts have been made by the media to blame drugs (bath salts) for Eugene’s behavior, but given that very few people who take drugs (or any description) end up hankering after some human flesh, and given the large number of incidents of cannibalistic behavior, it seems reasonable to assume that we may be dealing with some other causative factor here.

First, here’s a run down of some (but probably not all) of the recent cases of human beings going after their literal pound of flesh:

5-29-2012 – Police: Hackensack man stabbed himself and threw intestines at officers

Whenever bizarre or unusual incidents are grouped together like this in a short period of time, be they murders (or human acting out in some way), weird weather (like similar severe weather happening

simultaneously yet thousands of miles apart) or earth changes (like the massive Cyclone Yasi over Australia, massive earthquakes in New Zealand and Japan, the massive eruption of Puyehue in Chile – all of which happened in 2011), we should ALWAYS sit up and take notice, because such events are intrinsically linked to the course of human evolution, at least in the sense that they have the potential to affect human evolution in potentially drastic ways.

So to what can we ascribe the glut of cannibal attacks over the last two months?

First of all, we should dispense with the idea that eating human flesh is a tendency completely alien to human beings. There have been many historical cases of cannibalism throughout the world, from Fiji to the Amazon Basin to the Congo to MÄori New Zealand and, surprisingly for some, to European high society.

According to Dr. Richard Sugg in his book Mummies, Cannibals and Vampires, (to be published on June 29th), British royalty and aristocracy consumed parts of the human body as ‘medicine’. Eminent users or prescribers of such medical fare included Charles II, Francis I, Elizabeth I’s surgeon John Banister, Elizabeth Grey, Countess of Kent, Robert Boyle, Thomas Willis, William III, and Queen Mary. The practice “survived well into the 18th century, and amongst the poor it lingered stubbornly on into the time of Queen Victoria.” according to Suggs.

In the heyday of medicinal cannibalism, bodies or bones were routinely taken from Egyptian tombs and European graveyards and during the eighteenth century “one of the biggest imports from Ireland into Britain was human skulls”. Ironically, during the 18th century, many of those Irish skulls belonged to victims of the many ‘Irish famines’ deliberately created by the British monarchy and aristocracy. The writings of Irish political journalist John Mitchel suggest that some of these adult Irish victims of British imperialism, whose skulls would be cannibalised by the British elite, had themselves been forced to cannibalise their dead children.

While it is interesting (in a morbid sort of way) that cannibalism is not exactly unusual in human history, most historical incidences appear to have occurred when the diners were more or less fully compos mentis. In contrast, the list of recent events generally involve people who are, in one way or another, not in their right mind. So what could be causing people to ‘go off’ in such a macabre way?

While scientists at the University of Miami have, in recent years, been looking at the possibility of an outbreak of an airborne “Rabies Rage Virus”, there is no evidence that we’re dealing with a viral zombie pandemic, at least, no yet.

There is enough circumstantial evidence to suggest that our planet’s weather systems are directly influenced by solar activity, specifically charged particles from sunspots, solar flares etc. and that the earth’s magnetic field is also directly affected by these solar (and other cosmic) rays. Like the earth, humans (and animals) are also surrounded by a ‘magnetic field’, so could solar and other cosmic radiation be linked to outbreaks of crazy behavior among humans?

A 2008 article in the New Scientist magazine points to the research of Oleg Shumilov of the Institute of North Industrial Ecology Problems in Russia. Shumilov looked at activity in the Earth’s geomagnetic field from 1948 to 1997 and found that it grouped into three seasonal peaks every year: one from March to May, another in July and the last in October. [Note: all the recent ‘Zombie’ attacks occurred in April and May)

Surprisingly, he also found that the “geomagnetism peaks matched up with peaks in the number of mood disorders i.e. depression, anxiety, bi-polar (mood swings) and even suicides in the northern Russian city of Kirovsk over the same period.”

Shumilov acknowledged that this correlation does not necessarily mean there is a causal link, but he points out that there have been several other studies suggesting a link between human health and geomagnetism.

Kelly Posner, a psychiatrist at Columbia University in the US, has claimed that that geomagnetic storms can desynchronise circadian rhythms and melatonin production and thereby cause mental disorders. 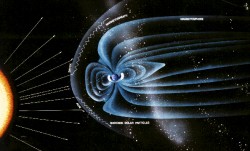 In 2011, Steven Reppert of the University of Massachusetts in Worcester and his colleagues were studying cryptochromes – the light-sensitive proteins that regulate the circadian clocks of many creatures, including humans, and help fruit flies and birds sense the Earth’s magnetic fields. Reppert wanted to know if human cryptochromes could be used to sense the Earth’s magnetic fields. So he replaced those found in fruit flies with a human version, hCRY2, which is found in the human retina. In tests, the fruit flies had no problem using human cryptochrome to sense magnetic fields, which implies humans have the hardware to do the same, but for some reason do not activate the ability, says Reppert.

Lead researcher Robert J. Gegear, from the Department of Neurobiology, University of Massachusetts Medical School summarized the findings as they relate to humans, solar and cosmic rays and the earth’s magnetic field:

“Our study suggests humans may be genetically pre-disposed to the influence by geomagnetic flux as it relates to the Earth’s magnetic field and charged particles such as solar flares, coronal mass ejections, gamma rays, and galactic cosmic rays.”

Leaving aside the implausible explanation of drugs or straight up ‘mental illness’ for the recent outbreak of the human version of Necrotizing fasciitis, it’s possible that what we are looking at here is something on a much broader, or Cosmic, scale. In this case, and in the case of a significant increase in solar and cosmic radiation entering our little corner of the universe, the radical effects that such energy can have on our planet in the form of major earth changes, the threat from a few ‘zombies’ rampaging through our towns and cities may turn out to be the least of our worries.

3 thoughts on “Is Solar and Cosmic Radiation Playing Havoc With Life on Planet Earth?”