Just an FYI here folks. For some reason, Rep. Laura Richards wants to amend the Homeland Security Act of 2002 to “require the Administrator of the Federal Emergency Management Agency to provide guidance and coordination for mass fatality planning, and for other purposes.” 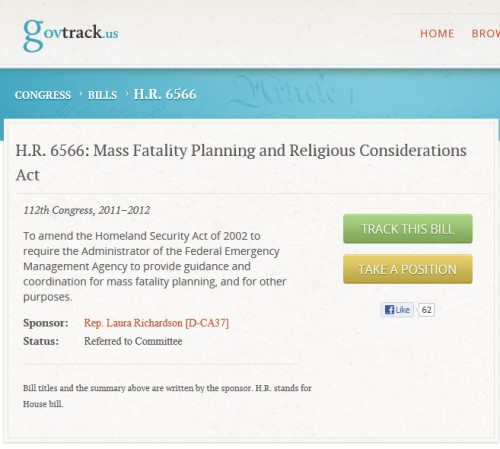 This Act may be cited as the â€˜Mass Fatality Planning and Religious Considerations Actâ€™.

(2) Funeral homes, cemeteries, and mortuaries could be overwhelmed should mass fatalities arise from a natural disaster, act of terrorism, or other man-made disaster.

(3) Different religions have different customs surrounding death; for example, the Jewish and Muslim religions call for burial of the deceased not later than 48 hours after death.

First we had the mass indefinite detentions act, now the mass fatality planning act. By any standards (even those of a Right Wing Authoritarian), that’s just a little creepy.