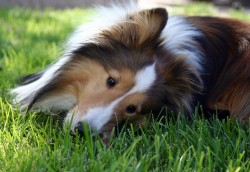 Given that we have recently changed our dogs’ diets from ‘kibble’ to real meat and bones, I suspected that the food that dogs eat was the answer to my question. A quick bit of research confirmed my suspicion: white dog poo is the result of the dog eating bones or bone meal, which contain a lot of calcium. The calcium that is not digestible by the dog is passed, and such ‘calcium poo’ is white and more or less odorless. On the other hand, the mass-produced ‘kibble’ that most dogs eat today is made up largely of vegetable oils and grains i.e. food that in no way resembles the diet that dogs ate as they evolved.Â  For this reason, a dog that eats kibble will poo a lot and the poo will be foul-smelling because the dog’s digestive system, which is optimized for digesting meat, cannot properly digest much of the kibble.

Then again, government bodies like the US ‘FDA’ and the UK ‘Food Standards Agency’ actively promote the eatingÂ  of ‘plastic’ food as the epitome of healthiness. And just because the corporations that make the plastic food pay government officials $millions to promote their chemical-laden plastic delights, there’s no reason to suspect that you might be being fooled into poisoning yourself (and your dog) in the interest of mega-profits for big-business and their big-government buddies. Is there?