I have a suggestion to make to anyone unlucky enough to read this.

There is strong enough evidence to suspect that the official story about the Sandy Hook massacre is bogus. There is strong enough evidence to suggest that there was more than one ‘shooter’ involved, and as such, the most plausible explanation is that the massacre was actually carried out by a ‘team’ (as noted by Niall Bradley in his recent article on Sott.net). The goal of this team in shooting 20 children and 6 adults, as I have already noted in my article on the topic, was to instill visceral fear in as many Americans as possible. Fear of their fellow Americans, fear that their neighbors, or their neighbors kid, of some guy in the mall, at school, at work … fear that anyone, really, could be the next ‘lone nut’ who might take out a couple of dozen innocent civilians on a whim.

InstillingÂ  this kind of fear was a means to an end. The end was to make the average American more disposed to looking to and relying on authority and the forces of law and order to ‘protect them’. This in turn gives the ‘government’ more freedom to enact new police state laws and helps to ensure that such laws will be met with the least resistance and most acquiescence from the population. After all, there is no shortage of hard evidence that the US ‘government’ has been making strenuous efforts to pass legislation that will, if it continues, lead to a truly overt police state USA.

Now, back to the ‘team’. We are talking here about apparently ‘human’ individuals who nevertheless had no compunction about walking into a classroom of beautiful 6 year old boys and girls and shooting them dead, some of them multiple times, in ‘cold blood’.Â  ‘In cold blood’ is a very appropriate term here, because it accurately depicts the reptile-like nature of these ‘humans’ and is contrasted with the warmth of the blood in the warm hearts of those innocent, adorable children, blood that was mercilessly and pitilessly spilled on their classroom flood as their little lives were brutally and callously snuffed out.

Ponder that concept for a moment, if you can, and try to grasp the nature of these ‘humans’ that can coolly commit such an act of inhumanity, in full awareness of what they were doing, and most likely enjoying it. And then consider that the feeling of having had a brush with unfathomable evil that results, is as close as you’re likely to get to understanding the nature of the individuals who rule this world and rule over us all.

If you’re still up for some more pondering, consider that these people murdered those 20 children for the specific purpose of attempting to force the American people to seek ‘protection’ from the authorities, and they did it because they were fairly confident that the American people would fall in line.

So here is my suggestion: if for no other reason than to honor the memory of those beautiful, innocent children, children like Noah Pozner (below), and to make a statement to the inhuman rulers of this world that you, at least, are still human, resolve now to resist the insidious militarization of America and the world and the global attempt to make docile, zombie-like slaves of us all.

The mother and uncle of 6-year-old Noah Pozner delivered the following message at his funeral reflecting on the life of the little boy killed in Friday’s school shooting: 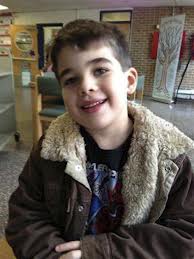 The sky is crying, and the flags are at half-mast. It is a sad, sad day. But it is also your day, Noah, my little man. I will miss your forceful and purposeful little steps stomping through our house. I will miss your perpetual smile, the twinkle in your dark blue eyes, framed by eyelashes that would be the envy of any lady in this room.

Most of all, I will miss your visions of your future. You wanted to be a doctor, a soldier, a taco factory manager. It was your favorite food, and no doubt you wanted to ensure that the world kept producing tacos.

You were a little boy whose life force had all the gravitational pull of a celestial body. You were light and love, mischief and pranks. You adored your family with every fiber of your 6-year-old being. We are all of us elevated in our humanity by having known you. A little maverick, who didn’t always want to do his schoolwork or clean up his toys, when practicing his ninja moves or Super Mario on the Wii seemed far more important.

Noah, you will not pass through this way again. I can only believe that you were planted on Earth to bloom in heaven. Take flight, my boy. Soar. You now have the wings you always wanted. Go to that peaceful valley that we will all one day come to know. I will join you someday. Not today. I still have lots of mommy love to give to Danielle, Michael, Sophia and Arielle.

Until then, your melody will linger in our hearts forever. Momma loves you, little man.