The biggest problem in our world today is that the vast – and I mean vast – majority of people have no – again, I mean no – idea of how the world actually works and has been working for centuries. Let’s take Putin’s Russia as an example. Most people in the West, including those who are relatively well-informed about the geo-political context, see Putin as a ‘dictator’, a cold-eyed ex-FSB agent who is running Russia with an iron fist. There is only one reason why anyone can have ever formed this opinion: they are massively ignorant of how the world works. Putin is ex-FSB, and it is he, along with the upper echelons of Russian intelligence, that runs Russia. This is seen as ‘anti-democratic’ in the West and in those Russian minds infected by Western ‘values’ and propaganda. Yet US and British intelligence (among others) have been running not only the USA and UK for decades, but, indirectly, much of the rest of the world also.

It’s difficult (in a face-palm kind of way) to listen to people, even well-informed educated people and ‘experts’, opine on global politics when they are clearly ignorant of (or studiously ignore) this most important fact. There is no ‘democracy’ in this world, and there has not been for, oh… forever. Western populations are so damn dumbed down and dissociated that they actually can’t figure out that nothing of any significance changes with a change of government, despite all the evidence before them. In fact, it’s worse than that, things do change, but for the worse from the point of view of the average citizen. Who will argue that Western warmongering and the divide between rich and poor has increased dramatically over the past 40 years? How many administrations does that period comprise, about 10? Democrat, Republican, Democrat, Republican… Whoopee frickin’ doo. In the UK, it’s Conservative, Labour, Conservative, Labour… In both countries, the supposedly ‘bleeding-heart lefty’ Democrat and Labour governments fronted by Tony Blair and then Obama actually out-warmongered their supposedly traditionally uber-warmongering opposition parties.

How do you explain that? Easy. There is no difference between them because neither of them, as parties or Presidents or Prime Ministers, actually control anything of any significance. Someone else does.

Tell me this; when Obama says that he took action based on “intelligence”, where do you think he got that “intelligence” from? Ok, you can figure that one out. But then tell me this; are you willing to bet that, since the intelligence agencies are the ones who actually “collect” the information that is used to develop and implement government policy, that they don’t see themselves as the real “deciders” in the USA? More to the point, are you willing to bet that they don’t just pull the intelligence out of their asses (metaphorically) in order to promote a particular government policy, like invading and occupying a supposedly sovereign nation, for example? You know where the safe money lies, I presume.

Getting back to Putin, and Ukraine specifically, the current ongoing “Russia’s going to invade Ukraine” situation is simultaneously laughable and disgusting. Poroshenko and his ‘advisors’ are desperately trying to demonize Putin and Russia to the entire world, going so far as to blatantly fabricate the “destruction of a column of Russian military vehicles that entered Ukraine” in an effort to smear Russia. To some extent, the Russophobia of Poroshenko and his Nazi-minded minions is understandable: to them, Putin really did organise the ‘repatriation’ of Crimea, a part of Ukraine as they see it, and he did it in such a way as to leave Kiev with no means to remedy the situation short of manipulating NATO into bombing Russia. So even if some may see Putin’s Crimea maneuver as justified, it’s hard for Poroshenko and Co. to accept it, and as I said, their anger is understandable – after all, land, and the expropriation of it, has been the primary source of genuine conflict throughout human history.

That said, in the case of Crimea, there is very little of the usual dynamics that historically provokes civil war, in particular, no one actually living on the land in question was dispossessed of it, and most of those still on it, now as part of the Russian Federation, are happy to be there. So I have some sympathy, if not support, for Kiev’s hatred of Putin and Russia as ‘evil incarnate’, even if they are wrong and, in effect, are themselves entirely responsible for the secession of Crimea due to their selfish and racist ideology. The same understanding however cannot be extended to the US military and political advisers who got the ball rolling in Ukraine earlier this year with their farcical coup. These psychos in suits and stripes are ‘merely’ pursuing their 20 year long unjustified and pathological attack on Russia’s attempt to take its rightful place as a major world nation, and they are coldly and ruthlessly exploiting Ukrainians to do so.

Oh, and by the way, in case you missed it. The same Right Sector ‘Maidan’ thugs who played the part of foot soldiers in the April coup in Kiev were recently involved in forcibly evicting activists who are still in the square in Kiev. What are activists still doing in the ‘Maidan’, you may ask? Oh, not much, just waiting for the reforms that supposedly sparked the protests to begin with. Yes indeed, the end result of all that chaos and bloodshed earlier this year in Kiev was the illegal booting of Victor “I’m not so sure about NATO and the EU” Yanukovych, and the shunting-in of Petro “I Love NATO” Poroshenko. All of the social and political changes that the majority of protestors actually took to the streets to achieve? DUH!!

But I digress. The really ridiculous thing about the hysterical caterwauling about Putin and East Ukraine is that, in terms of the unofficial rules of the game of international geopolitics, [b]as ‘written’ by the West[/b], Russia is fully entitled to send weapons, intelligence info and supplies to the separatists in East Ukraine under the aegis of “protecting Russia’s interests”. In fact, Russia has a lot of catching up to do if it is to ever come close to the level of US and Western ‘meddling’ in other nations. In fact, I don’t think Russia could ever do so, because the US and Western European nations have been meddling in the affairs of other nations for centuries, and in nations in which they had and have no obvious interest, save the “interest” declared by all pathological regimes aspiring to global hegemony.

The only interest that Russia has been attempting to protect is their very justified strategic interest in their own back yard, involving millions of ethnic and Christian Russians no less! By modern standards, that’s about as justified as it gets when it comes to “meddling in the affairs of another state”. Does anyone think that the US would think twice about invading Mexico if several million US citizens living there were threatened?

Unlike the US government promising WASP (White Anglo-Saxon Protestant) style ‘Freedom and Democracy’ to far-off lands of dark-skinned Muslims and then instead surprising them with a civil war and disintegration of their country, Russia has shown no intention of forcibly bestowing ‘Slavic values’ on anyone, and even those that expressly ask for it, like East Ukrainians, are frustrated by the very careful and patient maneuvers of Putin and Co. Yet these obvious facts are obscured and ignored by the West for both cynical political ‘anti-Russian’ purposes and because most people in the ‘West’ can’t drag their sorry asses out of the Cold War mentality, which in itself was one giant bogus propaganda offensive.

For more on the extent to which the West’s official historical narrative is largely false, tune in to tonight’s Sott Talk Radio show interview with Peter Kuznick 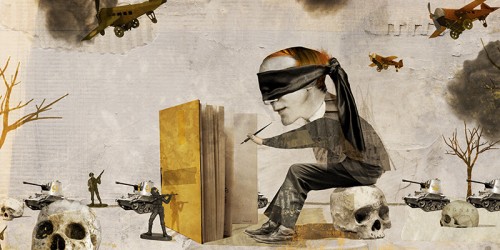