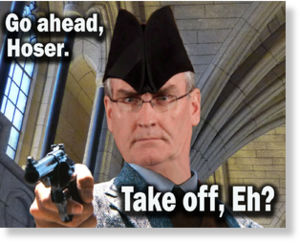 Today, Canada began bombing Iraq and Syria, justified in large part by a ‘terror attack’ the official narrative for which is falling apart. I’ve written previously about the suspicious background to the attacks in Ottawa and another city near Montreal a few weeks ago, but new details have emerged that pose serious questions about the official narrative surrounding the Ottawa war memorial and parliament shooting by Michael Zehaf-Bibeau.

The first problem is with the, by now, famous image of Bibeau, Keffiyeh around the lower half of his face, gun in hand. 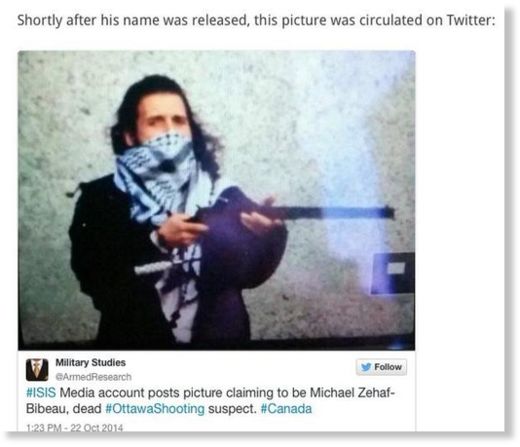 According to the Canada.com website, this image of Bibeau was not taken before his alleged attack for propaganda purposes but rather shows the erstwhile jihadi in the thick of the action:

“But hidden in plain sight in the photo is the concrete strength of the National War Memorial. The photo was taken by a tourist as the gunman embarked on his shooting spree, coming around the west side of the monument from the rear.

Yes, you read that right. Apparently Bibeau was considerate enough to stop and pose for a ‘tourist’ either right before or right after he allegedly shot Corporal Nathan Cirillo. In the image he’s pointing his gun, which means he was either in the process of taking aim at the soldier and decided to put things on hold for a moment to look at the camera, or he had already shot the Corporal and took the time to consent to the photographers request for a quick snap of the freshly ‘blooded’ terrorist.

As to how the police got hold of the image; in the lower right corner of the image there is a black rectangle which is, apparently, the zoom feature on Blackberry phones. After the ‘tourist’ took the photo of Bibeau, Ottawa police seized the camera and took a picture of the picture with a Blackberry phone and then circulated it to “every Ottawa police officer” and “with other law enforcement agencies”. Within seven hours of the shooting, the image, with the rectangle, had appeared on the Twitter account of @ArmedResearch. How that person, who is apparently a military historian. got the image is still a mystery, although he claimed it had first appeared on an “ISIL-related Twitter account – @V_IMS”. That Twitter account, which was tweeting in French, was suspended within an hour.

For its part, Canadian CBS News confirmed that they received the image of Bibeau and his name from “U.S. law enforcement sources”. Ottawa police Chief Charles Bordeleau said that determining how that picture was circulated, and by whom, will be a concern for his force. No doubt.

And if that hoary old tale doesn’t set off your BS detector, consider this:

A few days after the ‘terror attack’, CBC news ran an exclusive report that claimed to describe the “dramatic details of exactly how the shooter was finally stopped and killed, at point blank range by the Sergent-at-arms, Kevin Vickers“.

Here’s CBC News’ Evan Solomon dramatically taking us through those dramatic final moments of Canada’s Osama bin Laden as he dramatically met his match in the form of Superman Sergent-at-arms, Kevin Vickers who really should, you’ll admit, be receiving offers to star in the next Mission Impossible movie.

Apart from the over the top drama and obsequiousness of the presenters, the main problem is those “bullet holes” in the wall of the alcove in the Parliament building that provide ‘hard evidence’ to back up this rousing story of Canadian freedom and democracy’s triumph over nihilistic Islamic terror.

Here’s a still from the video you just watched showing the “bullet holes” in the alcove where Bibeau met his end on Wednesday 22nd Oct. 2014: 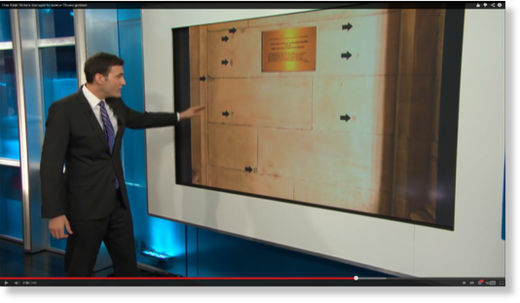 And here’s an image of the same alcove taken by Google sometime prior (probably 2013) to Wednesday 22nd Oct. 2014: 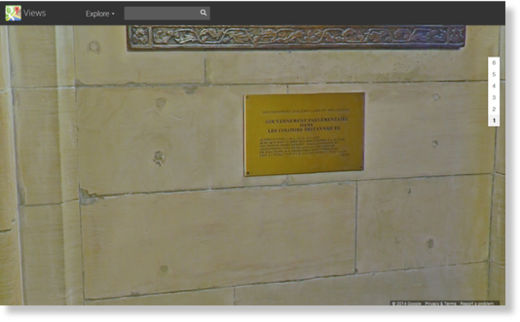 You see the problem.

Just to be sure the Google image of the alcove wasn’t taken after the ‘terror attack’, I grabbed an image of the library counter that, according to the CBC report, was struck by a bullet: 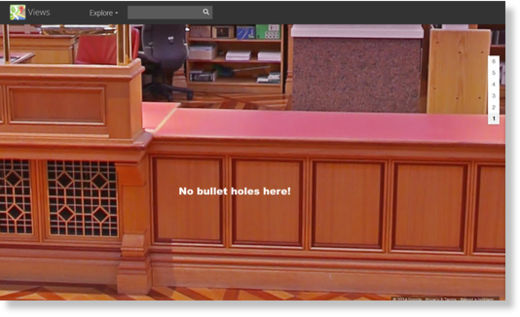 No one should be surprised, after all, it’s the mainstream media’s job to lie to Western audiences about the ‘terror threat’ so they will continue to support the political and corporate elite’s wars for profit. It makes sense, in a sick, psychopathic kind of way, especially when you realise that Canadian bombing of “ISIL targets” will provide the rationale for more “terror attacks” against Canadian citizens. In end, therefore, this isn’t a war on “Islamic terrorists”, it’s a war on the ordinary citizens of Western nations by Western psychopaths in positions of power.