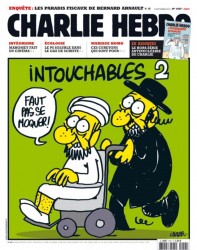 o who are the people behind the Charlie Hebdo shootings in Paris today?

I’m not sure you can put a moniker on those responsible for these kinds of “spectacular”, gruesome attacks.

Several effects are felt, and several agendas are served, at one and the same time.
The French and ‘Western’ peoples in general, are traumatised and given a stark reminder of the fragility of their own existence and the reality of the “Muslim terrorism” that threatens their existence ala “the clash of civilizations”.

The French government is given something serious to think about, including whether or not this is a message and from whom.

The Israeli government is perhaps pleased to see the French government, that recently voted for Palestinian statehood, being reminded that Palestinians are also Muslims, and everyone knows what Muslims are.

The US government is pleased to see the French government being given something more important with which to concern itself rather than publicly suggesting that sanctions against Russia should be dropped.

So pick your culprits out of that. Sounds like someone with a very global overview and an overarching agenda of control of pretty much everything, which they serve by periodic trauma-inducing, murderous attacks on civilians.

What we’re seeing unfold here, as I write, is a very similar story to that of Mohammed Merah. Merah was, by the evidence, a patsy, sheep-dipped and his information passed to French authorities as the culprit for the 2012 Toulouse shootings. A French RAID team went in guns blazing, with no intention of letting the evil terrorist emerge alive. Dead men tell no tales.

The process and outcome of this most recent attack will likely mirror that of the Merah case. A standoff for some period of time, with the “terrorists” then going down in a hail of bullets from both sides, allegedly.Â  Case closed. As one French SWAT (RAID) team memberÂ  just told the media “Ca va rafaler” “There’s going to be a riddling” (sorry, that’s the best I could do).