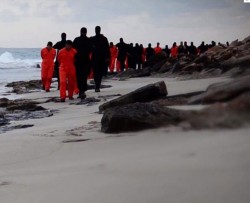 Days before Isis released its gory video depicting the Christian Egyptiansâ€™ beheadings, Libyaâ€™s former Prime Minister warned that the group would soon reach the Mediterranean and even Europe if order was not restored in the country.

Ali Zeidan said Libyaâ€™s fractured government and easy access to weapons seized during the fall of Colonel Gaddafi made it more susceptible to the activities of jihadists, according to The Times.

Here’s where the coincidence theorists come in.

It’s just a coincidence that the US invaded and occupied Iraq and created the conditions for the rise of ISIS in that country.

It’s also a coincidence that the US and EU trained and financed the “Syrian rebels” to wage war on Assad and facilitate “ISIS” to take over large parts of Syria and then Iraq, carrying out expertly filmed beheadings of Western citizens.

It’s equally coincidental that NATO bombed Libya in 2011, ousting Gaddafi, coincidentally opening the way for “ISIS” to get a foothold there and carry out these recent beheading of…you guessed it, Christians.

All of which is scaring the hell out of Western Christan populations thereby, coincidentally, opening the way for the US and EU governments to justify further imperial military adventures in the middle east and beyond.

Coincidence? You betcha! And don’t get me started on “incompetence theorists”.

13 thoughts on “ISIS and Coincidence Theorists”