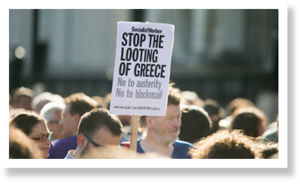 “They crucified Tsipras in there,” remarked a senior EU official who had attended yesterday’s European Council emergency summit meeting. “Crucified.”

Tsipras has certainly had it tough these last few days and weeks, but who is really being “crucified” by this series of intensive meetings that led to yesterday’s “agreement” in the “Greek crisis”? Tsipras is the Greek PM and leader of the Syriza party elected in January this year – thanks in large part to a middle and lower-class populist vote. Their mandate, therefore, was to work in the best interests of the Greek people. Unusually for European governments that get elected on a populist ticket, the Syriza government tried to do exactly that.

Compared to other more neo-liberalized EU states, the Greek economy has been relatively closed. “Closed” in this case means that manufacturers and producers in Greece are ordinary Greeks, with the profits from their labor remaining within the country for the benefit of the Greek people. This runs counter to the true aim of the “European Economic Union”, which is to “open up” member state markets for the profit of large multi-national corporations that in turn feed the international “financial markets” or a small coterie of international banking houses.

Of course, the official mission statement of the EU as it relates to the “Greek crisis” is defined by the European Economic and Social Committee as “achieving real participatory democracy in the EU, through civil dialogue“. The Greek people, and more recently the Syriza government, naively took this official remit at face value and for years have pursued this kind of social and economic agenda. This was a big mistake, but then, who can blame them? Holding political and financial power brokers to account and to their word is an absolute requirement if corruption, cronyism and social injustice is to be avoided. 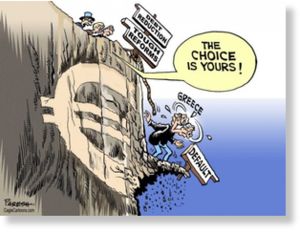 But such ideological naivety, and in particular any attempt to act upon it, is severely punished by the financial “elite”, whose wealth and status is directly threatened by genuine people power. This is why at the recent Eurosummit meeting, the Greek government was “crucified”. Even the German daily newspapers carried headlines describing a “catalog of atrocities” and a “deliberate humiliation” of the Greek people by the EU central powers, while EU officials acknowledged that the harsh terms of the “agreement” are to punish the Greek people for voting ‘no’.

So, last night Tsipras was subject to “extensive mental waterboarding“, forced, on pain of the complete destruction of the Greek economy, to submit to extremely harsh economic measures that amounted to a complete abrogation of Greek sovereignty and the impoverishment of millions of Greek citizens. That’s what happens when a government has the gall to allow the people to publicly confirm their desire for real participatory democracy and social justice. The message to the Greek people and other Europeans being, “In the EU, democracy and social justice exist only in words. Any attempt to make them a reality will be absolutely crushed.”

Debt isn’t necessarily a bad thing in our modern globalized world, as long as you belong to a “1st world” country. 1st world countries are afforded the privilege of obtaining loans from other wealthy nations and individuals at very low interest rates. This injection of cash allows the economy to “grow” at a rate where the debt repayment is all but assured, thereby encouraging more loans and further “growth”.

Less fortunate countries on the other hand, i.e. those that the wealthy nations want to perpetually exploit, are given loans at a higher rate of interest, meaning that they can never realistically pay the debt back no matter how much they try to “grow” their economies. They are further hobbled by the investing institutions, like the IMF, who dictate exactly how the loan money should be spent. Most often, “poorer” nations are required to use the cash to invest in products, services and infrastructure provided by corporations from the wealthy nations. This ensures that most of the profits are removed from the “poor nation”, keeping them poor and forever in debt to wealthy nations.

That’s how a “1st world” economy was “grown” for most of the 20th century. Since the 2008 “global banking crisis” however, loans that were given to Greece and other EU countries were earmarked for recapitalizing national banks that had lost money by gambling it on the international casino stock market. Obviously, the Greek people are not responsible for the fallout from a banking crisis of international proportions, yet the EU central powers, who loaned the money to refill the coffers of Greek banks, have insisted that they are responsible, and demanded that the Greek government impose “austerity” measures (cutting pensions, healthcare and public workers’ salaries, and privatizing public services) to raise the cash from the Greek people’s pockets to pay them back.

Since 2008, despite repeated attempts by the EU central powers to bring the Greeks to heel, the Greek government resisted the implementation of some of the most draconian austerity measures. Even so, between 2010 and 2014, the EU’s austerity bit deep in Greece: wages fell 20% and unemployment rose to almost 25%. Things were bad for Greece, but Germany was happy.

So when the Syriza party was elected by the Greek people in January this year with a remit to reverse the austerity measures already imposed, it became clear to the EU central powers that they had a serious problem on their hands. Their first (and, as it turns out) only response has been to threaten to ruin the Greek economy. First they shut off funding to Greek banks, forcing them to close and ration money at ATMs. The effect of this was to depress the Greek economy, which raised the spectre of Greece defaulting on its repayments to holders of Greek bonds (loans). On the basis of this manufactured new risk, the interest rate (yield) on Greek bonds rose to 12%, further bankrupting the Greek economy.

The message being sent was that Europe’s “elite” could easily send the Greek economy into a downward spiral from which it would not recover, and that Greeks might soon be dependent on international humanitarian aid to stay alive. Indeed, looking for all the world like a baddie out of a James Bond film, wheelchair-bound German Finance Minister Schauble deliberately included the term “humanitarian aid” in the wording of his proposals for what Greece would need in the event that it exited the Eurozone. In essence, the EU central powers are treating Greece with all of the contempt it reserves for “poor” countries while demanding that Greece meet the obligations of a full EU member.

A recent interview with former Greek Finance MinisterYanisVaroufakis, who engaged in most of the negotiations with the ‘Eurogroup’ (but was forced to resign because he was making too much sense), provides perhaps the most accurate summary of the situation and confirms my analysis here:

Varoufakis: Oh, well, a lot of it. But the inside information one gets… to have your worst fears confirmed … To have “the powers that be” speak to you directly, and it be as you feared – the situation was worse than you imagined! So that was fun, to have the front row seat.

Interviewer: What are you referring to?

Varoufakis: The complete lack of any democratic scruples, on behalf of the supposed defenders of Europe’s democracy. […] To have very powerful figures look at you in the eye and say “You’re right in what you’re saying, but we’re going to crunch you anyway.“

The “Greek crisis” talks over the past week, and in particular the actions of the German government, have made it abundantly clear that the European Union operates very much like the mafia, or the CIA. Once you join, you can never leave. A country joins believing the propaganda about freedom, solidarity, democracy and diversity, but soon realizes that they have a millstone of debt around their collective necks that can and will be used to force governments and entire populations to sign over their sovereignty and toe the line of predatory capitalism, where the energy and wealth of millions of people is funneled upward to a few criminals in boardrooms in Brussels and beyond to the gilded halls of international banking cartels.