“It’s so shocking. When Charlie Hebdo happened, it was a specific, targeted attack. But this time it’s terrifying because it is just random, innocent people going about their lives. I know a lot of people in Paris – there is panic and disorder here, no one can understand what’s going on. We are all in a state of complete shock.”

So said Quentin, 27, who works for an online company in Paris, and whose oldest friend was shot multiple times at the Bataclan concert hall.

Terrorist attacks like these are never “random”, at least not in the sense that they have no point. If they appear random, then that is undoubtedly part of the strategy that drives them. Governments and groups use terrorism to achieve a specific goal, so there is always a point. To understand what the point is, you just have to know who is really responsible.

We’ve already been told that “ISIS” has claimed responsibility for the Paris attacks, a claim partly backed up by the convenient discovery of a Syrian passport on the body of one of the “suicide bombers” (why do these terrorists always carry ID on their suicide missions?). But given that most ISIS terrorists in Syria are foreign mercenaries, this isn’t really evidence of anything, except perhaps that some ISIS terrorists were hidden among the Syrian refugees that transited through Greece this summer.

We’re told that ISIS aims to establish a caliphate over as much of the Levant as possible. But achieving that aim necessarily involves the removal of the Assad government, which Western powers have been lobbying for for several years. Over the past 4 years of the “Syrian revolution”, and until about 6 weeks ago, the group had gone a long way toward attaining that goal, with the Syrian Arab Army seriously pressed and the Assad government’s areas of control limited to small areas in an around Damascus. After 6 weeks of Russian airstrikes however, ISIS is now losing ground faster than a 3-legged donkey in a horse race, and their paymasters in Saudi Arabia, Qatar and Washington DC can’t seem to funnel enough money and weapons to them to make a difference.

This is the key point, and it’s no conspiracy theory: ISIS and other “Syrian rebels” are almost entirely the brainchildren of the US government and their allies in the Middle East. Without their support, as noted by many mainstream news outlets, ISIS would have long since disappeared from the pages of history. In a previous article, I outlined the geopolitical strategy being pursued by Washington and its Mid-East allies in funding a ‘Syrian revolution’ to overthrow the Assad government; it’s all about oil and gas pipelines to Europe and Asia, and thwarting Russian expansion.

So given that “ISIS” is being effectively routed by Russian airstrikes and the Syrian Arab Army, why would the ISIS leadership chose to add to their woes by massacring French civilians and provoking the expected French military response against ISIS in Syria and Iraq. I mean, do these people actually enjoy having Western bombs, in addition to Russian ones, fall on their heads? 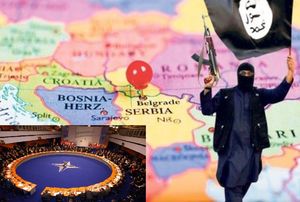 In case you haven’t noticed, just about every alleged Muslim terror attack since 9/11 has been immediately used by the US government and its allies to justify continued action in their ‘war on terror’. This is despite the fact that, on most occasions, the Muslim terrorists carried out their attacks for the express purpose of intimidating Western governments into ceasing their bombing and invading of Muslim countries.
Western governments clearly don’t mind killing civilians, especially civilians of other countries. Groups like ISIS share the same ideology, obviously. You’d think that, by now, the Jihadis would have figured out that the ‘great Satan’ is unlikely to be swayed from its imperial designs by a few terror attacks against its servants. On the contrary, it merely serves to encourage him in his hell-raising in Muslim lands. Then again, it is possible that, for a very good reason, the jihadis actually want a full-blown NATO attack on Syria.

So could it be that the failure of Western governments to adequately support the jihadis in their desire to give Assad the Gaddafi treatment has forced the jihadis to provide Western governments with the political capital necessary to take some real action? Are French citizens being asked to countenance the possibility that 129 of them had to be gunned down to motivate the French government to act? And if ISIS is largely controlled by the Saudis on behalf of the Americans, who is really providing this ‘motivation’?

Prior to the attacks in Paris, France’s worst terrorist atrocity was carried out in 1961 by the ‘Organisation of the Secret Army’ (Organisation de l’armée secrète) when it planted a bomb on the Paris-Strasbourg train line, derailing a train and killing 28 people. The OSA grew out of NATO’s ‘stay behind’ paramilitary groups (known collectively as ‘Operation Gladio‘) that were tasked with preventing European nations from siding with the Soviet Union and thereby posing a direct threat to US global hegemony.

The 1961 train bombing was specifically designed to prevent then French President Charles de Gaulle from signing the Evian accords that ended the France-Algeria war and paving the way for Algerian independence from France (and therefore NATO). A few days before the derailment, a threat had been sent to the station master and a police investigation into the tragedy found was that it was a deliberate attack. This information was, however, kept secret for 20 years.

Members of this same Secret Army Organisation, in league with US intelligence, made several attempts to assassinate de Gaulle. After the most serious attempt in 1962 when the President’s car was raked with machine gun fire by a member of the OSA, officers of France’s external intelligence agency still loyal to de Gaulle traced the assassination attempt through Permindex, the Swiss corporation linked to the assassination of JFK, to NATO headquarters in Brussels, Belgium.

De Gaulle realised that NATO, despite the talk of “allied powers”, was little more than the HQ of US military expansionist plans in Europe and decided to remove France from its influence. Today NATO, and its Supreme Headquarters of Allied Power in Europe, or “SHAPE”, based just north of Mons in southern Belgium remains the cover through which US hegemony is exercised over all European nations, particularly the former Soviet republics. In 2009, under then President Nicolas Sarkozy, France rejoined the NATO alliance.

There are many examples that show the extent to which the US government, through NATO, has been prepared to go to undermine genuine European independence and thwart Russian influence. One example was the 1980 bombing of a train station in Bologna Italy that killed 85 people and wounded more than 200. While “communists” were originally blamed, in recent years evidence has emerged that the culprits were in fact Italian secret service agents, including a CIA liaison officer, operating under the aegis of Gladio, who were determined to prevent Italy from ‘swinging to the left’ and into the arms of Soviet Russia.

It seems to me to be a rather interesting coincidence then that, one day after the Gladio-style Paris attacks, a French train on the Paris Strasbourg line derailed, killing 10 people. While authorities almost immediately discounted a deliberate attack and blamed “excessive speed”, police investigating have said the cause is still unknown.

The point of NATO’s ‘Gladio’ network was to create a strategy of political and social tension in European countries. This “strategy of tension” can been defined as a campaign to create trauma and shock in a population and, if necessary, generate a crisis of citizens’ trust in the democratically-elected government and generating – again, if necessary – the conditions for a military or authoritarian force to assume power. It can also be used to create a security psychosis among the population, dividing the population against itself and encouraging citizens to advocate for a more authoritarian political organization that will deal with the security problem.

In the specific context of the modern ‘war on Muslim terrorism’, the demonization of Muslims is a prerequisite for continued Western meddling in the Middle East and elsewhere – not to mention continued Western sanctioning of Israel’s brutal treatment of Palestinians.

In such a context, terror attacks attributed to Muslim groups like ISIS – especially when they occur in a country like France with a significant Muslim minority – cannot but be seen as serving a very particular agenda that, unfortunately, must not be explicitly named.