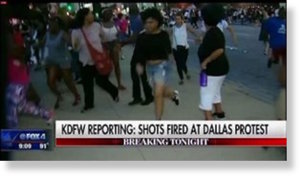 Social tension in the US appears to be at a boiling point. In the span of a week we have seen the deaths of two civilians – Alton Sterling in Louisiana and Philando Castile in Minnesota – at the hands of cops. The two deaths were caught on video and have further enraged public opinion in the US, in particular among the black community, which has borne the brunt of police brutality for many years. Within a few days of the slaying of Sterling and Castile, five police officers were shot dead by “a sniper” during a ‘Black Lives Matter’ march in Dallas, held in protest against the police killing of the two men. Is someone trying to stir things up in the USA?

On Tuesday July 5th, Alton Sterling, 37, was selling CDs for cash outside a store in Baton Rouge, as he did most days. On this particular day he was approached by a homeless man who repeatedly asked him for money. Sterling told the man to leave him alone several times before resorting to showing the man that he was armed. The previous day Sterling had purchased the weapon for his own protection. “He didn’t have a gun before that,” barber Ronnie Harton, 50, told the New York Daily News. “He said he had to protect himself, because he had all this money on him [from selling CDs]. Around this area, you get robbed real quick.”

Perhaps resentful that his requests for money were rebuffed by Sterling, the homeless man called 911 on his cell phone and told police that there was an “armed man in the parking lot.” When police arrived and confronted Sterling, he was tackled to the ground, tased and, apparently because police were told he was carrying a firearm, publicly executed with two shots in the chest and four in the back.

On July 6th, Philando Castile was pulled over for a minor traffic violation and, when asked for his ID, informed Officer Yanez that he was carrying a licensed firearm, which is legal in Minnesota. Immediately thereafter, Yanez drew his handgun and shot Castile to death. In video of the immediate aftermath of the incident, Yanez is heard exclaiming that he had told Castile not to move but that he reached into his pocket. Castile’s girlfriend however made it clear that the officer had asked Castile for his license and ID and that it was these documents which Castile was reaching for when the officer shot him 4 times at point-blank range. There is no suggestion that Castile was reaching for, or planning to reach for, the gun – about which he had previously informed the officer.

Hot on the heels of these two disturbing incidents of ‘death-by-cop’, an otherwise peaceful protest march in Dallas ended with 5 cops dead and 9 others injured as a result of (according to initial reports) sniper fire from elevated positions and ground-level. Starting at around 8:30 pm in the evening and towards the end of the protest march, “at least two snipers from elevated positions began firing on officers, ambush-style,” according to the Dallas Police Chief David Brown. Fox News reported that, according to their sources, “people dressed in masks and clothing of a similar kind had attacked police.”

The New York Times reported that police believed there were 4 snipers, but then deleted that reference from their article, but not before Gawker (among countless other media outlets) carried the quote:

“There were about 800 protestors and 100 police officers in the crowd when the shooting began around 8:45 p.m., the New York Times reports. Dallas Police Chief David O. Brown says police believe there were at least four snipers positioned above the end of the parade route, specifically targeting law enforcement officers.”

“Some [officers] were shot in the back,” Brown said at a press conference Thursday night. “We believe that these suspects were positioning themselves in a way to triangulate on these officers.”

A screenshot from a Google search confirms that before the official narrative was in place, reports referred to multiple suspects:

But within a few hours these multiple assailants had been officially transformed into a single individual – Micah X. Johnson – who was, by then, holed up in a building of the El Centro college campus. Johnson, we are told, had used “shoot and scoot” tactics, or running around (with superhuman speed apparently) and firing from different locations to make police think there was more than one shooter. A black former US soldier, Johnson allegedly told police that he was upset about the recent shootings of black men by police and wanted to kill whites, “especially white officers”. Conveniently enough, he also said he was working alone.

According to Johnson’s family, Micah originally wanted to be a police officer. Instead, he joined the military, but he came back a changed man. Originally extroverted and fun-loving, he became a “hermit” after his six years in the military (including 7 months in Afghanistan). His idealism toward the military and his country was replaced by disappointment and resentment. He never expressed any hatred to whites, only hatred to injustice – studying black history and ‘liking’ groups such as the New Black Panther Party and the African American Defense League on Facebook.

After a period of ‘negotiation’ with police in the college building, during which he “made no sense” and laughed and joked about killing officers, police claimed that Johnson had died from a self-inflicted gunshot wound. But apparently these reports of his death were greatly exaggerated, because soon thereafter, we are told, a robot with 1 lb of plastic explosives attached to it was dispatched to Johnson’s location to put an end to the public spectacle. This, by the way, marked the first time that US police forces have used a robot to kill a suspect.

And so we have yet another American mass shooting – this time against cops – which began with multiple eyewitness and media reports of multiple shooters, but ended up as a ‘lone wolf’ event with an official narrative containing at least as many holes as the story about the original ‘lone wolf’ shooter – Lee Harvey Oswald – who single-handedly assassinated JFK – in Dallas. This admittedly skeptical perspective appears to be shared by at least one Dallas police commander, who told the Dallas Morning News and Compton Herald that a conspiracy is at work to cover up the multiple shooter angle:

“A commander in the Dallas Police Department said Johnson didn’t act alone and described the shooting as a “conspiracy.”

Speaking on condition of anonymity, he said several people were involved in the planning, logistics and execution of the coordinated attack. He declined to elaborate.”

Another troubling detail of the official narrative is the fact that the protest in Dallas was planned after the shootings of Castile and Sterling, so only someone with knowledge of the parade would know where to position themselves to be able to fire on the police following the parade. Would one man, with no knowledge of these facts, be able to pull off this kind of attack? It is highly doubtful. So if, like the Dallas police commander says, there is a conspiracy to cover up the fact that Micah Johnson didn’t act alone, one has to ask just why that is the case. Why does the multiple shooter angle get covered up? We can only guess that it’s because the authorities cannot fit multiple suspects into their narrative and it’s much easier to create a narrative when there is just a ‘lone wolf’. Perhaps, in carrying out such operations, the real multiple shooters are part of the covert hit team that always gets away, leaving the fall guy to take the ‘lone wolf’ blame. In this case, the multiple shooter angle must be covered up.

What we seem to be dealing with in these types of events is a supra-governmental group conducting themselves Operation Gladio-style in order to discredit and demonize the Black Lives Matter movement and dissuade its members – and all ordinary black people in the USA – from continuing their protests against police brutality and murder. In addition, such attacks on police officers serve to increase the sense of insecurity and aggression among police officers when dealing with ordinary members of the public, in particular black people.

In short, the point seems to be to throw fuel on the ‘racial tension’ fire in the US, and justify increased authoritarianism, division and control over the domestic population. If we were to go out on a limb and theorize about why this is happening and why it is being done in this manner, we would suggest that the ‘powers that be’ in the US want to impose an overt dictatorship on the American population, but one that at least a majority of Americans will welcome with open arms to ‘protect’ them, perhaps against black militancy, perhaps against Muslim terrorism or, more likely, both.

Randomly killing cops in the street serves no strategic purpose for any genuine civil rights, activist or political group, which implies that the people who actually committed these killings are agents provocateur who killed a few cops in service to their agenda to further erode the few freedoms and liberties left in the US, incite a race war, and usher in an increasingly oppressive police state. Hillary Clinton is also undoubtedly very grateful that the events in Dallas ‘coincidentally’ sidelined the news that she committed a federal offense and should therefore be ineligible to run for president.