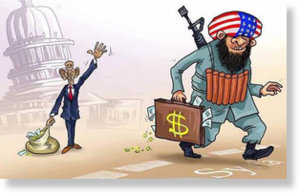 In his 1925 autobiography Mein Kampf, Adolf Hitler wrote that the best way to manipulate public opinion en masse was to use the ‘big lie’ – a lie so “colossal” that no one would believe that someone “could have the impudence to distort the truth so infamously.”

According to Hitler, an example of the ‘big lie’ was seen in the way in which the Jews blamed Germany’s defeat in WWI on German General Eric Ludendorff. After WWI, Ludendorff had popularized the idea that Germany had lost the war because they were ‘stabbed in the back‘ by Marxists and Bolsheviks – many of whom were Jews – who led the 1918-1919 German revolution that is credited with helping to bring an end to German involvement in the war. So the allegations against Ludendorff were a response to his allegations against the Jews.

Later, Joseph Goebbels put forth a slightly different version of the “big lie” in an article dated 12 January 1941 titled ‘From Churchill’s Lie Factory’:

“The essential English leadership secret does not depend on particular intelligence. Rather, it depends on a remarkably stupid thick-headedness. The English follow the principle that when one lies, one should lie big, and stick to it. They keep up their lies, even at the risk of looking ridiculous.“

While neither Hitler nor Goebbels provided hard evidence to support their claim of a conscious use of the ‘big lie’ by their enemies, the concept has endured because it reflects so well what the average human being generally and intuitively understands about the psychological make-up of other humans: that most people tell the truth, more or less, and when they lie, they do so largely by omission to excuse or protect themselves in scenarios that are understandable (if not defensible). Few people would ever expect a person to lie for no good reason or to lie so ‘big’ (in particular on a moral issue) that they completely invert the truth. Further compounding the issue is the fact that the average person assumes that people in authority are naturally more honest and principled than they are, making official ‘big lies’ even less plausible.

So the idea that a person who has spent their lives working for and loudly proclaiming their love for humanitarian and pacifist values, for example, could also be a secret warmonger who wouldn’t hesitate to kill anyone if it served their interests, is alien to the average person. The problem, however, is that there is plenty of evidence that such people do exist, and that they are over-represented in positions of power and influence over the ordinary people of this world.

On the positive side, events in Syria in recent years have presented the ordinary people of this world with a relatively rare opportunity to see the ‘big lie’ on open display and to identify the individuals who promote it.

Consider the fact that, two days ago, US military jets bombed the positions of the Syrian army, which was actively engaged with ISIS terrorists at the time. Dozens of soldiers were killed. In the immediate aftermath of the attack, and thanks to the bombing, ISIS fighters moved into the position previously held by the Syrian army.

In his response to the incident, US Secretary of State John Kerry issued a characteristically hollow apology, stating that the US government “regrets” the bombing and “would never intentionally target Syrian forces”. But he also repeated the lie that Assad was “bombing people indiscriminately” and was preventing “humanitarian access” to Syria. At the emergency UN Security Council meeting that Russia called over the bombing, the US ambassador to the UN – the ever lovely Samantha Power – used the opportunity to hysterically denounce Russia for calling the meeting, depicting it as a “stunt replete with moralism and grandstanding” that was “uniquely cynical and hypocritical”.

Power also parroted her boss’s ‘big lie’ that Russia and Syria had repeatedly “bombed innocent civilians” and that the Syrian government had used chemical weapons and “patented the practice of double-tap strikes”. Despite Power’s accusations, there is no evidence that either Russia or Syria have bombed innocent civilians, or that the Syrian army “bombs indiscriminately”. What does that even mean? That Assad is bombing everyone? Maybe he bombed his own army? Or maybe Kerry and Power mean that he bombs all the terrorists, even the ones that America supports? If so, tough luck! When any group takes up arms (with foreign help) to oust a democratically-elected government, that government is fully entitled to order its military to bomb the coup plotters! As for the ‘chemical weapons’ slur, the only evidence (check it for yourself) of the use of chemical weapons in Syria points to US-backed ‘rebels’.

But the prize for the most egregiously hypocritical lie has to go to Power’s claim about ‘double-tap strikes’.

The concept of a double-tap strike is the brain-child of two British police chiefs working in Shanghai during the 1930s, so the Syrian government can hardly have ‘patented’ it. In addition, the practice is most commonly associated with US drone strikes against, mostly innocent, civilians in places like Iraq, Yemen, Pakistan and Afghanistan. But the real cherry on the crap cake that Power presented to the UN was the fact that, 24 hours after she made her bogus ‘double-tap’ accusation, US airstrikes in Afghanistan killed 8 policemen in a (you guessed it!) ‘double tap strike’.

An initial airstrike killed one policeman late Sunday, while a follow-up strike targeting first responders killed at least seven others, said Rahimullah Khan, commander of the reserve police unit in Uruzgan, according to Reuters.

No doubt the irony was lost on Samantha Power, a classic example of an asthenic psychopath with a messianic complex to ‘save the world’.

Those who have been paying attention will also remember that it was Russia that began the process of peace talks (twice) and also initiated the delivery of aid to the people of Aleppo and other Syrian towns and cities. This was obviously done with the full approval of the Syrian government. So for Kerry to justify the bombing of Syrian troops by claiming that “Assad is preventing humanitarian aid from entering Syria” is cynical in the extreme.

In the US State Department, the term ‘humanitarian aid’ has a very different meaning than the one you’ll find in the dictionary. For decades, the US government and its affiliated intelligence agencies have used the cover of ‘humanitarian aid’ to infiltrate foreign countries with fifth-column elements tasked with overthrowing a sitting government. In a war zone, the same ruse is used to achieve by ‘peaceful’ means that which could not be achieved through violence. In this case, access to and control over large parts of Aleppo.

So don’t be distracted by the ‘humanitarian aid’ card that is now being played by the likes of John Kerry. Russia and Syria are actively attempting to broker a ceasefire with the US and its jihadi mercenaries so that real Russian and Syrian aid can be delivered to the people of Syria by their own government and its allies. The US, on the other hand, is cynically using the ruse of a ceasefire and ‘UN humanitarian aid’ to force the Syrian and Russian militaries to stop bombing the US’ jihadi terrorists who are trying to overthrow the Syrian government against the will of the majority of the Syrian people and to give control of Aleppo to the US’ jihadis.

Astute readers will also notice that this scenario places the UN aid agency in the role of stooge for American government regime change, especially in light of last night’s bombing of a UN aid convoy that the US immediately, and without any evidence, blamed on Russia and Syria. Coming immediately after the US attack on Syrian forces and Kerry’s claim that “Assad is bombing people indiscriminately and won’t let aid into Syria”, we can reasonably conclude that it was the US military, or its proxy jihadis, that deliberately attacked the convoy to provide ‘evidence’ that Kerry’s bogus allegation against Assad is true.

The end result, consciously engineered by the USA, is that all aid convoys to the beleaguered Syrian people have now been stopped, the Russian-brokered cease fire is destroyed and attacks on the Syrian people by America’s jihadis have resumed in earnest.

How’s that for humanitarianism? Samantha Power must be proud.