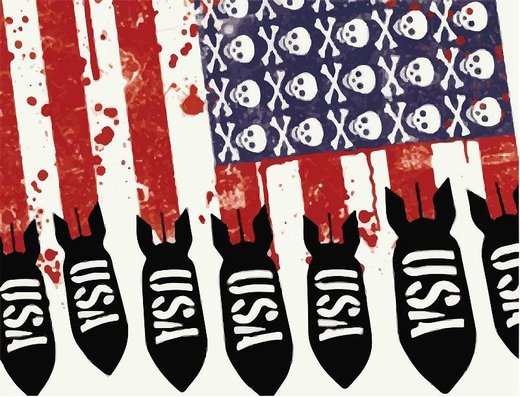 Since the collapse (thanks to the US government and military) of the Russian-American ceasefire in Syria, the US has been doing what little it can with the options it has left, using the international media as its personal lapdog in service to more war and carnage, and threatening to arm terrorists with MANPADS and other heavy weaponry. Meanwhile, its narcissistic inability to ‘play nice with others’ is causing it to spiral out of control, losing allies around the globe and pushing it into open conflict with massively armed opponents Russia and China.

US losing the Syrian War

In his most recent gaffe as US State Department spokesman, John Kirby effectively channeled his inner Osama Bin Laden to justify, and seemingly incite, terrorist attacks against Russia:

Russian Foreign Ministry spokeswoman Maria Zakharova pointed out the obvious: this is a very poorly veiled and amateurish threat. The fact that Kirby quickly backed down from his comments goes to show that he was perhaps not in a position to make such a threat, but was merely letting his own warped mind take over at the podium in order to get a few quick lashes in.

Meanwhile the Syrian war continues to serve as the cradle for World War III, with the US as its handmaiden. The ceasefire that began on September 12th barely lasted one week, with the Syrian government claiming “over 300 violations by US-supported moderate rebels”, and with the most notable violation being the US attack on Syrian Army positions in Deir ez-Zor.

The US airstrikes in Deir ez-Zor killed over 80 Syrian servicemen, injured approximately 100 more, and helped ISIS establish themselves just south of the city. As South Front reports, “The ISIS terrorist group has been massively attacking the Syrian army and the National Defense Forces (NDF) in the Syrian city of Deir ez-Zor since the successful seizure of the strategic Turdah mountain with the support of the US-led coalition’s air power.”

However, Qassem Units, elite Syrian troops, made massive gains inside the city itself, taking ISIS’s main industrial infrastructure. On the 19th AMN reported: “The Islamic State terrorists were forced to withdraw across the Euphrates after the Qassem Units overran their positions on Monday afternoon.” Unsurprisingly, the US Air Force immediately took out the bridges connecting the Syrian Army from the opposite side of the river.

The battle for Aleppo rages tirelessly as Syrian and Hezbollah forces (with Russian support) attempt to retake the city and root out the US-backed al-Qaeda splinter group al-Nusra. Meanwhile the US rages impotently from the sidelines about ‘barrel bombing’ and ‘the destruction of hospitals’ in Aleppo without providing any evidence to back it up, while sending more weapons and munitions to the foreign jihadis in the country.

Russian Foreign Ministry spokesperson Maria Zakharova warned today that there would be a “tectonic shift” in the Middle East if the US were to launch a military campaign to oust the Syrian government:

“If the US launches a direct aggression against Damascus and the Syrian Army, it would cause a terrible, tectonic shift not only in the country, but in the entire region.” With no government in Damascus, there will be a power vacuum in Syria, which “so-called moderates, who are, in reality, not moderate at all but just terrorists of all flavors, would fill; and there will be no dealing with them” Zahharova said.

The fact that the Russian government feels the need to state this publicly suggests that there are serious concerns in Moscow that this is precisely the plan the Pentagon is now considering, and it is certainly a plausible scenario. After all, the sole reason that the Syrian people and army have been subjected to 5 years of slaughter is because the US wants to remove the Assad government and thereby deal a blow to Russian interests in the Middle East (and secure a gas pipeline deal or two). But are the hawks in the Pentagon mad enough to take such a step? Let’s not forget that US Secretary of Defense Ash Carter recently told the Senate Armed Services Committee that the only way to prevent Syrian and Russian planes from flying in Syria is to go to war with those two countries. If the US were to start officially bombing Syrian troops and attempt to assassinate Assad, that would amount to the same thing. The problem is, they could only do so at a great cost.

But things are not so simple. In the scenario where US military overtly attacks the Syrian army, the Russians would feel pressured to not ‘start a nuclear war’ with the US ‘just to keep Assad in power’. If the Russians believe such a scenario is possible however, they could take preventative action by immediately placing a sizable Russian force on the ground in Syria (and Damascus) and make it public. In that case, the tables would be turned and it would be the US that would be overtly ‘risking war’ by bombing Syrian troops because they’d also be bombing Russian troops. In winning the propaganda war, it’s all about who ‘fires the first shot’ don’t ya know.

Having said that, such a plan could still not be implemented without risk, because the moment a large enough detachment of Russian troops were on the ground in Syria, every ounce of US-backed jihadi firepower (i.e. all that exists in Syria) would be directed at those troops in an effort to make it “painful” enough for the Russian government and military to pack up and go home. Such is the nature of the ‘cat and mouse’ game being played in Syria right now between the world’s only significant military ‘super powers’. One day you’re the cat, the next you’re the mouse.

As battles rage in and around Aleppo, Deir ez-Zor, and Homs, Turkish forces continue playing a relatively silent role in northern Syria, suggesting that none of the sides seek to divulge much information regarding what the Turkish forces are up to.

Operation ‘Euphrates Shield’ began in late August, with Turkey’s armed forces taking the town of Jarablus in northern Syria. The US had been backing Kurdish units in the area, seeking to create a mini-Kurdish state with which to divide and conquer the country. Serving as relatively useful idiots for US interests while having legitimate grievances of their own, the Kurds were a thorn in the side of both Syrian and Russian objectives. But attacking them was not a politically intelligent thing to do for either country, since they were both a nominal ally against ISIS and a stakeholder in the future of Syria.

But as Andrew Korybko reported at the time, Turkey was in a strategic position to disrupt the Kurdish sub-state, and had a vital strategic reason to do so – Erdogan had long used anti-Kurdish sentiment as a tool for power, and has every reason not to see the seed of what could become a large Kurdish state along Turkey’s southern border. And, following the CIA’s attempted coup against him and his meetings with Russia, the US was eager to salvage ties with him and gave Erdogan some room to flex his muscle.

Perhaps speaking out of both sides of his mouth, Erdogan claimed three main goals for the operation, all of which coincided with the US plan for regime change in Syria. They were the creation of a ‘safe zone’ in northern Syria, especially the northwestern tip west of the Euphrates, a no-fly zone, and cooperation with the US in training and equipping rebels. Erdogan went on to say, “They tell us not to move further. We will. We will move to wherever we need to move. We have to remove the threat against us from all those areas. We had negotiated this matter earlier. We had stated that we have to create a safe zone of 90-95 kilometers wide and 40-45 kilometers deep. We had spoken with President [Barack] Obama on this issue at the G-20 summit in Antalya, and he had accepted it. We had also discussed this with Putin.”

But as was made clear by the US bombing of the Syrian army in Deir ez-Zor and the attack on the UN convoy that was blamed on Russia – two events in quick succession that served to destroy the Putin-Kerry agreed ceasefire – the US State Department and the Pentagon seem to be pursuing two different and mutually exclusive strategies. So it is no surprise then that, behind the scenes, Erdogan’s approach in Syria was ruffling some feathers in the USA. Al-Monitor reports:

Operation Euphrates Shield, which was progressing rapidly, has slowed with the appearance of Americans in the field. Sabotage by some groups supported by the Pentagon that oppose the FSA and the withdrawal from the battlefield of some opposition groups that don’t want to cooperate with the Americans have benefited Daesh [IS]. Daesh, which recaptured seven villages two days ago, last night retook five more villages from the opposition groups. … Now there are allegations that the United States, in addition to planting sedition to disrupt the harmony of Euphrates Shield, is supplying Daesh with intelligence about the opposition groups and planning to send the PYD to al-Bab, which is being targeted by Turkey.

Al-Bab is a strategically critical city north of Aleppo. Holding that city helped the Free Syrian Army cement control over much of northern Syria. Can Turkey be trusted? It’s impossible to say. But the way the situation is unfolding seems to affirm a real strategic shift in Ankara’s approach – away from the US.

Not content with the chaos and death they have created in Syria, the US political ‘elite’ have nonchalantly launched a propaganda and financial war against their all-time favorite Head-Choppers: the Saudi royal family. When the US Senate recently overrode Obama’s veto and passed the recent ‘Justice Against Sponsors of Terrorism Act‘ allowing 9/11 victims’ families to sue Saudi Arabia, an unnamed Saudi Foreign Ministry source responded that he “hoped that wisdom will prevail and that Congress will take the necessary steps to correct this legislation in order to avoid the serious unintended consequences that may ensue.”

But serious unintended consequences were already underway, for the Saudis, in that the news immediately caused the Saudi stock market to plunge. The financial situation of the Royal Head-Choppers was bad enough already, having been cajoled into participating in the US oil price plunge war against Russia late last year, while simultaneously escalating their war against the Houthis in Yemen. Oilprice reports:

As the veto override vote has worked its way through the Senate, Saudi Arabia’s currency plunged to its lowest level in four months, and its stock market “lost the most in the world for a second straight day,” Bloomberg reported. Bloomberg follows 90 stock indices, and Saudi Arabia’s Tadawal All Share Index was the worst performer in recent days, falling to its lowest point since the beginning of this year (a time when oil prices dropped to below $30 per barrel). This could complicate or delay Saudi Arabia’s bond sale, sources told Bloomberg.

The situation appears to have unnerved the Royal Misogynists so much that they immediately got OPEC together and hashed out a plan to reduce oil production among member states (to increase the price). But even more indicative of the frayed nerves in Riyadh was the fact that the House of Saud extended special conditions on the agreement to none other than their arch enemy Iran! Having just been released from decades of US-enforced sanctions, Tehran is eager to sell as much of its oil as possible, and due to Iran’s diversified economy, the Iranians are in a far better position than the oil-soaked Saudis to do so at lower prices. Then again, the Iranians are in a far better position than the Saudis to do many things, like not being a bunch of degenerate, venal, pseudo-Muslim, phony ‘Royal’, misanthropic, head-chopping nut-bags