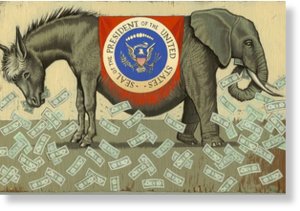 Veteran Oscar-winning ‘anti-American’ documentary-maker Michael Moore appears to have lost the plot. Moore recently held a surprise sneak preview screening in NYC of his new documentary Michael Moore in TrumpLand. Recorded over two nights earlier this month in the pro-Trump town of Wilmington, Ohio, the film is much less an exercise in Trump bashing than a tribute to the dubious virtues of Hillary Clinton.

By way of introduction to the recent screening in NYC, Trump told the audience:

“What the country doesn’t need is to be told that Trump is a crazy, dangerous psychopath [and] sociopath, all of that. He has written and produced that movie and it appears daily.”

Moore’s backing of Clinton is surprising given that he has been one of her most outspoken critics. In the run-up to the 2008 elections, he said he was “morally prohibited” from voting for Hillary due to her support for the invasion of Iraq, and as recently as March this year he called her ‘Wall Street’s paid candidate”. Then again, that was when there was a ‘Democratic’ alternative in the form of Bernie Sanders, whom Moore strongly supported.

When questioned after the screening about his apparent change in opinion, Moore made it clear that he still doesn’t like Clinton:

“She has a very close relationship with [Wall Street]. If you’ve read any of the Podesta emailsâ€”or her emailsâ€”you can see that she’s inclined to that… The fight will continue. The Bernie Revolution on Nov. 9th is critical. If we just leave it up to her, she may tend to side with that which she’s become used to. I feel the same way about the Iraq War vote, I don’t feel any less passion about her mistake.”

While this suggests that Moore has joined the ranks of the millions of Americans who plan on voting for Clinton simply because ‘anyone is better than Trump’, Moore’s reference to Clinton’s “mistake” over the Iraq war points to something else going on with the political ‘left’ in the USA.

The problem, it seems, is that many Americans are still under the illusion that there is a difference between Democrat and Republican party politics in the USA. While this may be true, to a small extent, in terms of domestic affairs, American foreign policy has been ruled by the ‘political establishment’ for decades. And when it comes to dominating the world or ‘protecting America’s strategic interests’, virtually every member of the Democratic and Republican parties, regardless of the office in which they ‘serve’, reads from the same song sheet (I believe it’s ‘The Battle Hymn of the Republic‘ especially the part that reads ‘Our God is marching on!’).

The Democratic party is traditionally the ‘anti-war’ party, and yet, in the 8 years of Obama’s rule, 10 times more drone strikes were ordered than during the 8 years under Bush. Granted, Bush presided over the annihilation of Iraq and the murder of 1.5 million Iraqis, but under Obama (and Hillary Clinton when she was Secretary of State), tens of thousands of Libyans were murdered and the country destroyed, Syria was invaded by a US-backed jihadi mercenary army and up to 400,000 Syrians slaughtered. Oh, and Yemen was attacked, with 10,000 civilian dead and counting. That’s a pretty decent tally for a warmonger. 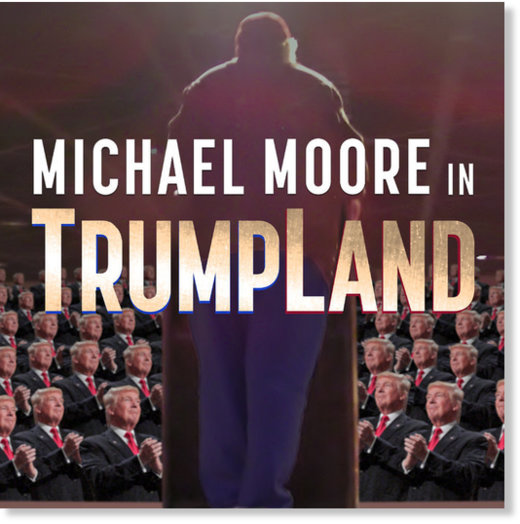 Moore’s apparent belief that Hillary’s vote for the Iraq was a “mistake” is contradicted by her obvious love for war and death. I’ll presume that Moore (and most other Hillary supporters) have seen her reaction to the video of the public sodomization, torture and execution of Muammar Gaddafi. How can anyone watch Hillary’s unbridled glee over the brutalization of a 70-year-old man, who had never done her any personal harm, and not come away with the conviction that that woman is little more than a violent animal without an ounce of compassion?

Yet it seems millions of Hillary supporters and Michael Moore are well able to engage in the mental gymnastics required to wipe that truth from their minds and believe her to be a better option than Trump for president. While other members of the Obama administration at the time no doubt were jubilant at the destruction “opening up” of Libya, and viewed the murder of Gaddafi, four of his children, two of his grandchildren and their pregnant mother in their home (the Pentagon called it a “command center”) as par for the course, they at least had the restraint to not whoop it up in front of an interviewer. Hillary, on the other hand, is such a raging psychopath that her awareness of the need for a US Secretary of State to project a high level of decorum was, in that moment, overwritten by her fundamentally destructive nature that rejoiced at the idea that a major world leader had been publicly slaughtered just for her.

Now before anyone gets their knickers in a twist and thinks I’m defending Trump, I’m not. Yes, Trump is a foul-mouthed ‘baby man’ with a misogynistic bent. Yes, he has made some rather racist comments, and yes, he has talked about banning Muslims from entering the US. Did I miss anything? Oh, I did! I didn’t mention the fact that no one in their right mind believes anything a US politician says when they are campaigning for the presidency, because everyone knows that each candidate, especially those from the two ‘establishment’ parties, chooses a ‘hot topic’ campaign platform to differentiate them from each other, to further the illusion of the possibility of change. When they are elected president, amnesia immediately sets in. Trump chose immigrants and Islam because it was a hot topic and on the minds of many Americans (and still is).

But more to the point, how is it that Trump gets flak for targeting Muslims when Hillary is part of the US political establishment that launched several wars of aggression against Muslim countries that required the public demonization of all Muslims as terrorists? Fifteen years of anti-Muslim rhetoric from the US political establishment, including the portrayal of all Muslims as terrorists, and Trump is the bad guy for making a hollow campaign statement that he would ban Muslims from entering the country? Really? And while Hillary continues to publicly lobby for more US military attacks on Muslim nations??

The same applies to pretty much any issue you choose. Democrats and liberals generally agree that the 2000 election was rigged in Bush’s favor. But they fly into fits of hysterics when Trump suggests that the DNC will try the same hijinks (even though they’ve been caught on tape talking about how they do exactly that). They are horrified by Trump’s domestic electioneering on abortion and his apparent misogyny, but are responsible for the deaths of thousands of children in far-off lands and give their support to the most misogynistic dictatorships on the planet.

So the real problem with people like Michael Moore and just about every Hillary supporter, is that they are fundamentally ignorant of the truly inhuman nature of the individuals that comprise the US political establishment – both ‘left’ and ‘right’- and the horrific torture and bloodshed they have deliberately unleashed on the world. That ignorance allows them to indulge in the fantasy that there still is accountability, that a change in the decades-long entrenched warmongering policies of the US establishment, of which Hillary Clinton is a long-term member, is possible from within the same system.

In fact, you could say that the evidence that the warmongering US bi-partisan establishment feared being exposed is seen in the very fact of Trump’s run for the presidency. As revealed by a leaked email from Clinton campaign manager Robby Mook’s assistant to Clinton campaign chair John Podesta, the Hillary camp deliberately encouraged Trump’s candidacy – in part by talking about him from the very beginning rather than another contender – because he represented Clinton’s best bet at diverting attention from her connections to the corrupt US establishment and thereby making her the next POTUS.

One of Clinton’s core problems is that she is nominally a democrat, but she is also an avowed warmonger and war criminal. How was she going to garner enough support from the ‘left’ (i.e. bleeding heart, anti-war, liberal, lefty, commies of all stripes) in the USA if she didn’t have some imposing, foul-mouthed, ‘racist’ sexist buffoon to run against and drive all the lefties back into her camp. Does that sound like a pretty complex conspiracy to you? Then you’re a nutty conspiracy theorist, and so are most of Clinton’s campaign workers.

So how to sum up my point here. Do I even have one? Trump is an embarrassment, but then so was George ‘Dubya’ Bush. But unlike Bush, Trump isn’t a representative for the entrenched, bi-partisan, establishment war party that has been running the USA since JFK. Clinton, on the other hand, is a repulsive psycho war harpy who delights in the slaughter of innocent civilians and old men. And if the American people elect that she-devil to represent them, they’ll be sowing the wind that reaps something very, very disagreeable.

1 thought on “Michael Moore, US Elections and the Bogus Left-Right Paradigm”