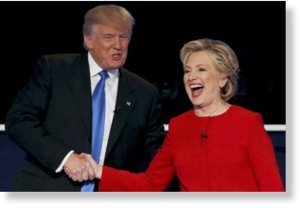 50-55% of Americans (the number that actually vote) still indulge themselves in the narrative that voting in the Presidential election gives them some influence over the direction their country takes, and provides them with the feeling of having some personal power. The other 45-50% that don’t vote get the same feeling by supporting their favorite sports team or emotionally attaching themselves to the daily life choices of their preferred celebrity.

In terms of the ‘bigger picture’, this year’s election is something of a watershed. For the first time the US population is being emotionally manipulated to not just choose between Democrat and Republican, but between two candidates that are clearly (even to the average American) reprehensible assholes. At the same time, the people are being encouraged and manipulated to find as many ways as possible to ignore the fact that the candidates are disgusting individuals, and choose one anyway.

The sane response to being offered either a shit sandwich or a shitshake is to refuse both, but apparently a decent percentage of Americans have, in essence, lost their senses.

I have no idea what the result of such a choice will be (regardless of who ‘wins’), but when large numbers of people somehow find themselves willfully voting for one of two people to rule over them, when both candidates are clearly a very bad choice, the results will be good neither for the psychological health of those who happily engage in such self-delusion nor the future of the great American nation.

Having said that, the odds are that Hillary will win because most of the 45-50% of Americans that will vote are godless Western liberal types. In addition, Hillary will win because of the nature of America’s ‘democratic’ system where the votes of the people themselves do not really count but rather the political affiliation of the Congressional Reps and Senators in any given state do. For example, if California has more Democrat Reps than Republican (it does), then all of California’s electoral college votes go to Hillary (because of the way the people are likely to vote based on ‘team’ affiliations. This ‘electoral college’ system is the reason why, many months ago, the next US president could be predicted with up to 90% accuracy.

But for those who fear the prospect of a Hillary administration, fear not, the FBI will save the day. Since the days of J. Edgar Hoover, the FBI has served the function of ensuring bi-partisan control over political power in the USA. Blackmail and the threat of incarceration (or in Hillary’s case impeachment, at least) is very effective at ensuring that any uppity US politician does not get beyond his or her station.

Hillary obviously has delusions of grandeur, but backing up her lust for power is a well-entrenched Clinton network of allies and cronies in Washington that would allow her to leverage the full power of the Presidency, unlike most previous presidents who understood the position to be a largely ceremonial one.

The prospect of a President actually being the ‘decider in chief’, even a President as character-disturbed as Hillary, has probably awoken traumatic memories of JFK and the threat he posed to the backroom boys of the ‘deep state‘, who are quite attached to their covert control of the world’s greatest democracy.

This threat is probably the reason for the antics of the FBI in recent weeks, which were seen as them ‘intervening’ in the election on the side of Trump. The more likely reason for the FBI statement about “new emails” however was to serve subtle notice to Hillary and Co. that the Feds have the dirt on her and, when she is elected, she’ll play by the rules of the ‘deep state’, those ‘concealed institutions’ that take the important policy decisions.

So poor Hillary and poor America. There’s no change in sight here (remember Obama?), except in terms of the fact that a decent number of Americans are today ridding themselves of what’s left of their conscience and sanity by voting for either a corrupt warmonger or a self-absorbed baby-man, and believing one or the other will ‘make American great again’. Not exactly the change we were hoping for.

In the combination of ‘corrupt warmonger’ and ‘self-absorbed infantile narcissist’, you have a perfect description of the American body politic as it has formed – over many decades – around the policies of the concealed institutions of the deep state. The energy for real reform, for real change in the USA, must come from the American people, but before that can happen, the American people must wake up to the reality of the system under which they live. The disturbing debacle that was the 2016 US presidential election ‘race’ was perhaps the last moderate wake-up call for the American people and the world that they are on the wrong track. The next one may, by necessity, be much more alarming. 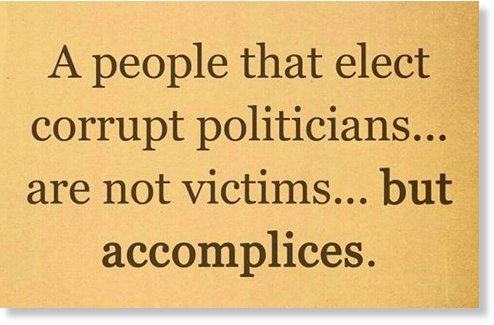 1 thought on “Wakey Wakey! Deep State USA and the US Presidential Election Farce”