Anyone who thought that the Western media would cease in its efforts to trash the image of President Trump after inauguration day was sorely mistaken. Trump had not even been sworn in before NY Times‘ Washington correspondent Binyamin Appelbaum disingenuously tweeted an image of the number of people at the inauguration, before Trump had even arrived, and negatively compared it to an image of Obama’s inauguration in 2009. 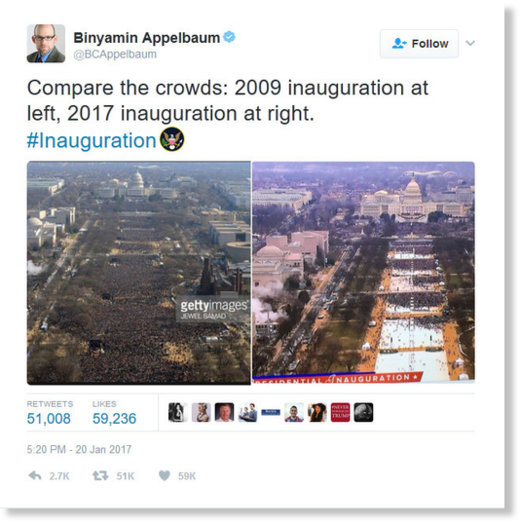 Note that the 2009 image is a Getty photo, whereas the 2017 image is a screenshot from a live video feed, which you can tell by the graphic across the bottom of the screen. When questioned about the relative timing of the two images, Appelbaum claimed that the 2009 image was taken at 11:30am, thus half an hour before the commencement of inauguration proceedings, and the 2017 image taken at 11:15am.

The ‘story’ and image was then picked up and carried by other “news” outlets. PBS published this timelapse video, which they used to support the case for ‘large white empty spaces’ at Trump’s inauguration:

Did you notice what they did at the end of the video? They ‘wrapped up’ the time lapse – as if to suggest that those final moments showed the full extent of Trump’s crowd – even as people were clearly still arriving. PBS – like most mainstream media do when they know they’re selling fake news – disabled comments under the video.

The reality is that the areas available for public attendees at Trump’s inauguration were full to about 90% capacity. Check out this interactive gigapixel image of the scene, taken during Trump’s inauguration speech. Here are some screenshots from that wide-angle image, clearly showing large numbers of people all the way back towards the Washington Monument:

One or two of the blocks of designated viewing areas are thinner, but those large empty white blocks Appelbaum passed off as the extent of Trump’s crowd are gone. Obviously, it’s possible to quibble over the total numbers, and when you look at the crowd at Obama’s 2009 inauguration, it certainly looks like more people came to see Obama take the oath of office. Nevertheless, Trump still drew between 700 and 900 thousand people.

And that fact in itself is remarkable.

92% of electors in Washington, DC voted for crooked Hillary Clinton. Do we expect that many of them came to see their nemesis Trump take office? Conversely, most of those who voted for Trump live far from DC (and the East coast in general), so the fact that so many people actually made the trip is evidence of the high level of support the new president enjoys. The alternative view on this is that Trump enjoys far more support than the election results would have us believe.

Then there are TV viewings. The mainstream media doesn’t dispute that Trump’s inauguration is second only to Obama’s 2009 ratings, but what they neglect to mention is that, these days, about the same number again watch TV on the internet. If we add just CNN’s online viewings to the official TV viewings, Trump’s inauguration was indeed the most-watched in history.

The widespread and consistent media attacks against Trump are clearly deliberate. To underscore that point, in an interview published on Thursday by New York Magazine, CNN President Jeff Zucker warned US President Trump that if he continued to call out the mainstream media on its use of fake and distorted news, CNN (at least) would negatively shape the perception of the Trump to people around the world.

“One of the things I think this administration hasn’t figured out yet is that there’s only one television network that is seen in Beijing, Moscow, Seoul, Tokyo, Pyongyang, Baghdad, Tehran and Damascus — and that’s CNN,” Zucker said. “The perception of Donald Trump in capitals around the world is shaped, in many ways, by CNN. Continuing to have an adversarial relationship with that network is a mistake.”

Just to remind our readers, the establishment media, in particular outlets like CNN, The NY Times, The Washington Post and the Wall Street Journal, are outlets with a long track record (that continues to this day) of deceiving the public over issues that serve the interests of the Washington political elite while ignoring the interests of the American people. Specifically we can refer to the lies these media tools peddled about the Iraq war (Saddam’s WMDs), Libya (the real reason for the NATO destruction of the country and the death of Ambassador Stevens), Syria (including CIA funding of Muslim terrorists in that country), and their continuing flagrant misrepresentation of Vladimir Putin and Russia’s role in Syria (destroying the CIA’s jihadi terrorists). The cherry on this fake news pie being the bogus allegations about Russian ‘hacking’ of the US election and connections between Trump and Putin.

The point, then, is this: if these media scoundrels are anti-Trump, then we can assume that Trump must, in one way or another, represent a threat to the Washington political elite warmongers and pedophiles and their yellow journalism lackeys. That, in itself, is reason enough for all people of good will to, at the very least, oppose the scurrilous and duplicitous attacks against Trump.