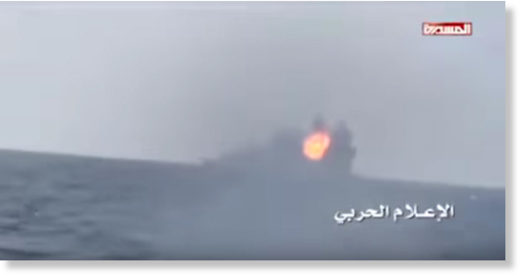 On Jan. 30th (more or less, no one knows for sure), a “Saudi Frigate” was broadsided in the Red Sea by something that caused a big explosion and killed, reportedly, two “Saudi sailors”.

Iranian media reported that the Saudi frigate had been hit by an anti-ship missile. This was followed soon after by Saudi media reports that a terrorist attack was carried out by “suicide boats,” or small craft laden with bombs. The Western media initially repeated the Iranian report but then corrected that mistake in favor of the Saudi version – of a “suicide gun boat” piloted by a bunch of wild-eyed ‘al-Qaeda’ terrorists. So which was it? Logic would suggest that it was a missile. The Houthis had previously fired a missile at an Emirati ship last October and the idea that a naval frigate miles out to sea would have allowed one or more small boats loaded with fertilizer to approach it close enough to detonate is laughable. So why did the Saudi and Western governments and media lie about it?

There are several things you need to know in order to understand why this lie was ‘catapulted’ to the Western public. First, as a general rule, everything bad (like dead soldiers or downed aircraft or ships) that happens to the US military abroad should, if possible, be covered up and prevented from reaching the public, because the image of the US military as invincible is very, very important in bolstering the myth of American exceptionalism.

Third, all of America’s client or proxy governments tend to adopt this same policy, usually under Pentagon instruction.

In this specific case of the attack on the “Saudi frigate”, the truth is very likely that the “Saudi frigate” was an American frigate, and the “suicide gunboat” was actually an Iranian anti-ship missile, supplied to the Houthis by Iran (the Iranians have been supplying the Houthis since day 1 of the conflict in Yemen). Even in the case that the “Saudi frigate” was flying a Saudi flag and manned by Saudi navy personnel, anyone who knows anything about the relationship between the Saudis and the USA will understand why it was still, effectively, a US frigate.

For their part, the Saudis were only too happy to spin the event as a “suicide gun boat”, because the Houthis cannot be allowed to appear as an effective fighting force because, as everyone knows, the Saudis only attack atavistic terrorists with primitive weapons who want to unseat the flowering democracy that is the House of Saud Sade.

The US government actually has prior form for spinning a missile/torpedo attack on a US Naval ship as a “jihadi fertilizer suicide attack”. Back in 2006 I wrote about the 2000 attack on the USS Cole as it sat in a Yemeni harbor. Coincidentally (or not), the USS Cole was recently dispatched to the Yemeni coast to protect against further missile attacks dingy-loads of fertilizer from disrupting US and Saudi operations in the area. Best ship for the job, no doubt!

White House spox Sean Spicer is new to the job, which might explain his inappropriate candidness when he spoke of the attack a few days ago. But before we go to Sean’s words, let’s all have a good laugh at the inanity of a UK Independent report on the event, which states:

The President’s spokesman appeared to both conflate Iran with the Houthis, a militia fighting the Saudi-backed Yemeni government, and confuse the US with Saudi Arabia in his comments.

Yes indeed, what a silly thing for the President’s spokesman to do! What was he smoking!? I mean, everyone (at The Independent at least) knows that conflating the USA and Saudi Arabia is a ridiculous thing to do! I mean, you may as well conflate freedom and democracy with the overthrow of democratically-elected governments! Or the Clinton Foundation’s ‘global gender equality’ project with flogging women for adultery! Sheesh! Anyway, here are Spicer’s exact words:

I think General Flynn was really clear yesterday that Iran has violated the Joint Resolution, that Iran’s additional hostile actions that it took against our Navy vessel are ones that we are very clear are not going to sit by and take.

Major Garrett, Chief White House Correspondent with CBS News, can then be heard in the video of the briefing quietly correcting Spicer – “a Saudi vessel” – to which Mr Spicer responded: “Sorry, thank you, yes a Saudi vessel. Yes, that’s right.”

Yes, thank you, CBS, a “SAUDI” vessel. “I have NO idea why I said ‘our Navy’! It must be the stress of being responsible for pretending that the Trump administration has ANY control whatsoever over foreign policy as directed by the Pentagon, and the Pentagon alone.”

Spicer did not, however, think it was necessary to correct the allegation that the Iranian government carried out the attack because, eh…well, ya know…Houthis, Iran, Iran Houthis, but this is stuff the American people don’t need to know, so eh… whatever.

For those that still haven’t figured out what is going on: America is fighting an existential and failing war to maintain control of the Middle East and its resources that are the life blood of American exceptionalism. For a more detailed analysis of the forces at work, see my articles: Russia, Syria and the anglo-American existential gas war in the Middle East and U.S., British and Saudis thwart Freedom and Democracy in Yemen – again and Bahar Azizi and Niall Bradley’s: Monolithic and Ruthless Conspiracy: The West’s Obliteration of Yemen by Covert Means

The reason “Saudi Arabia” has been bombing the hell out of Yemen for the past 3 years is because it too is fighting an existential war (more or less on behalf of, and with the full military support of, the USA). If Iran gains control over Yemen by way of a Houthi victory, then Saudi Arabia will effectively be completely encircled by Iran and Russia, and will eventually fall into the ‘sphere of influence’ of those countries (with or without a decapitation of the House of Saud). Without Saudi Arabia as its long-term client state (complete with the petrodollar) and the control over and threat to global oil prices and delivery that status affords, America’s reign as a global power will come to a, likely crashing, end in short order.

No one wants that, because there is the risk that the demise of the exceptional nation, on whose currency the world exceptionally relies, will take everyone else down with it. But if the alternative is a world dominated by the psychopaths in power in the USA and their culture of ‘creative destruction’, then perhaps a wiping clean of the slate will, like the Trump administration, be the ‘lesser of two evils’.

Here’s a map which may help to understand what is at stake, although quite a lot of extrapolation is necessary. If you don’t want to do that yourself, read the last linked articles above. 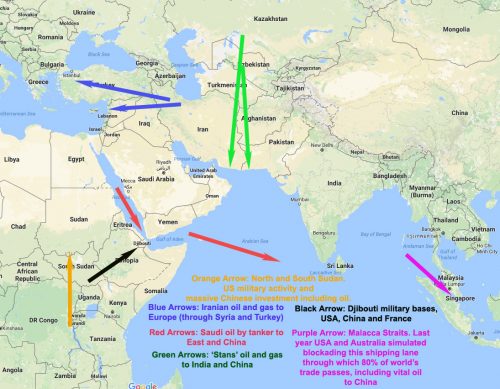