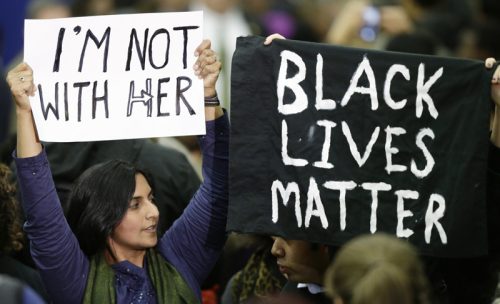 A couple of weeks ago, the latest in the sequence of apparently interminable ‘social justice furors’ erupted on social media, this time over the design on an item of clothing sold by South African branches of Swedish multi-national clothing-retail company H&M.

Given that these days the ‘real’ media gets most of its material from social media – turning many reporters into FB and Twitter addicts and FB and Twitter users into attention-seeking drama queens – it wasn’t long before the story had reached far more people than it ever should have.

In the process of making this non-story into something akin to an international scandal however, something very disturbing was revealed. But let’s not get ahead of ourselves

The offending clothing item was a child’s hoodie, one of a small collection, all of which were ‘jungle themed’. Here’s an example: 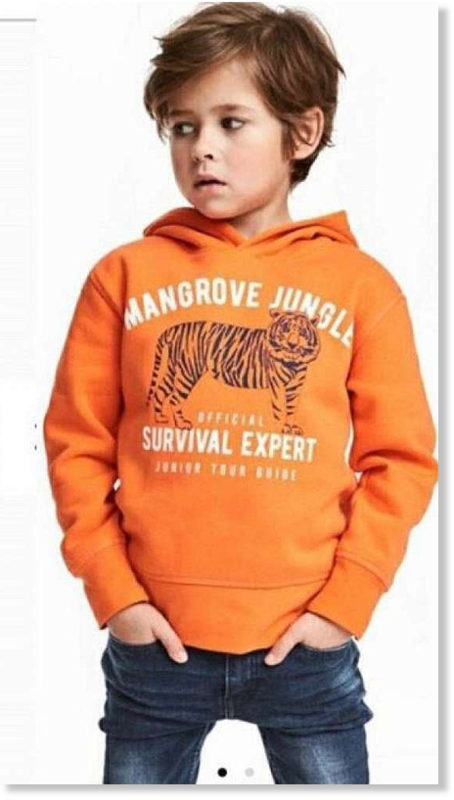 Horrible, isn’t it. I mean, what kind of deviant mind could come up with this? Oh, wait, that’s not the problem hoodie, this is it: 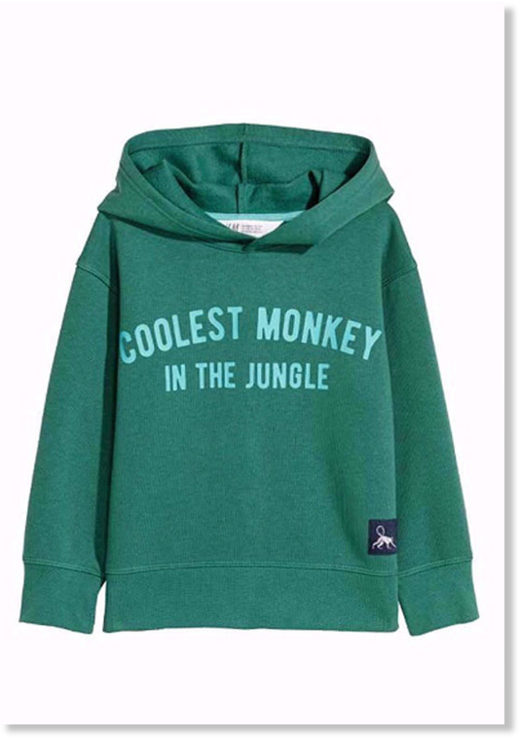 NOW can you see how horrific this is? Oh, wait, I think I forgot something. 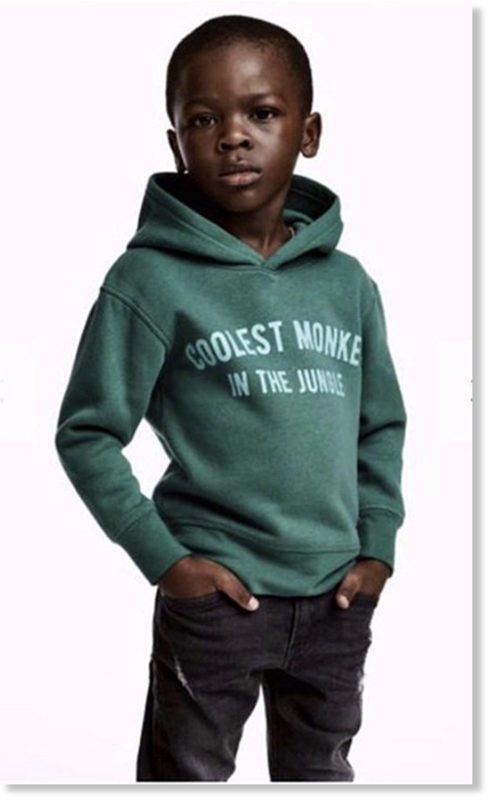 Now we see the real problem. An otherwise innocuous child’s hooded shirt has been transformed into an egregious example of the ‘structural racism’ that festers at the heart of everything (especially if it’s white, Western and ‘capitalist’), because the child model used was black African.

The SJW drama demon that notified the twitterverse of this racist abomination was London-based Stephanie Yeboah, a ‘plus size style blogger and writer’ for several mind-numbing glossy magazines.

Apparently the only reason Stephanie wasn’t able to understand the thought process behind having a child wear a t-shirt with the word “monkey” on it is because the child is black, and because Stephanie is racist. Stephanie is one of a growing number of pathologically self-righteous and self-interested people in Western societies who are racists who accuse other people, who are not racist, of being racist. They do this in an effort to attract attention to themselves and, they hope, increase their personal power and position in society.

Stephanie’s tweet was retweeted more than 21,000 times (from her account alone) giving multiple tens of thousands more Twitter users the chance to be outraged and virtue signal their pants off. ‘Celebrities’ across the board joined in the ‘outrage’ with rapper (or something like that) ‘P Diddy’ offering the boy a million dollar modelling contract, allegedly. 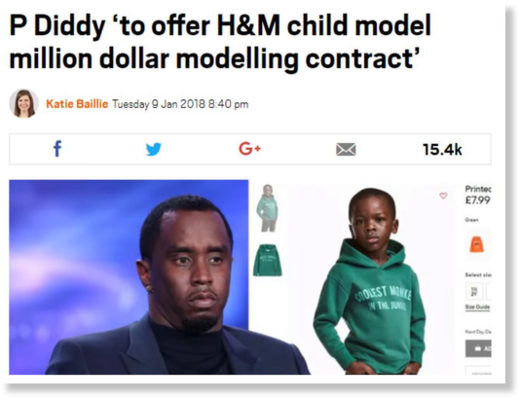 Memes were also created that elevated the otherwise happy child to the level of ‘king’. 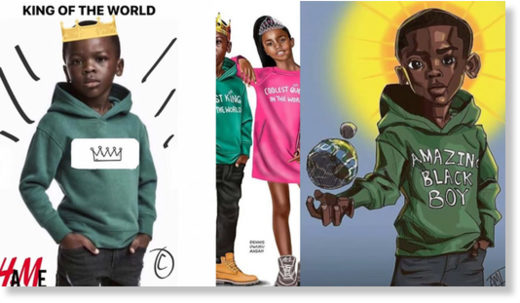 A mural of the boy, complete with a halo, was even painted on a wall in Angola. 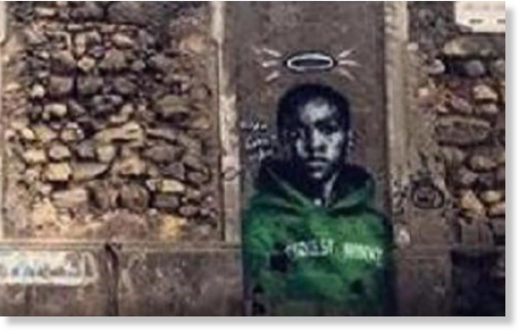 But the racist lefty radicals didn’t stop at virtue signaling. When the boy’s mother, Terry Mango – who is from Kenya but lives in Sweden – told the swarms of pseudo-outraged to calm the hell down and stop ‘crying wolf’, 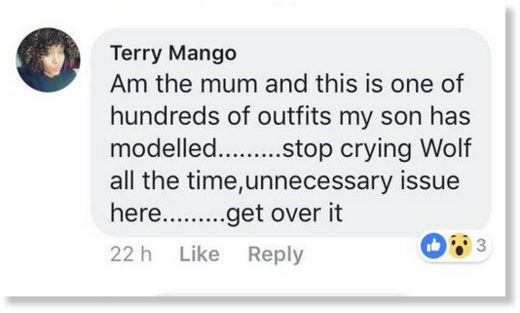 she herself was called a monkey by the supposed anti-racists for not agreeing with them that the hoodie was evidence of the white racist patriarchy that persecutes all non-white people. 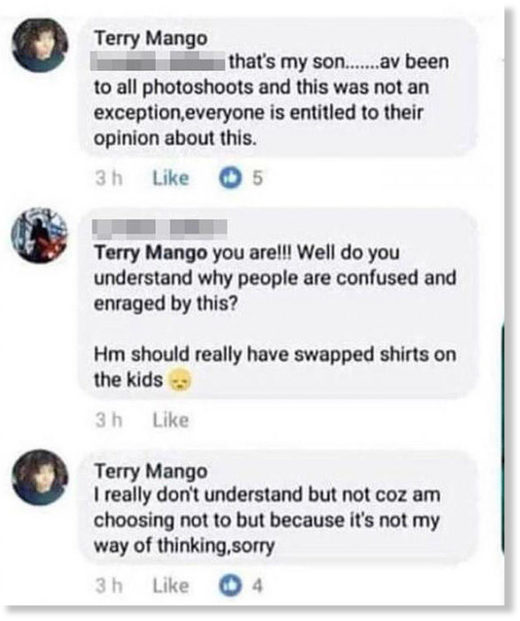 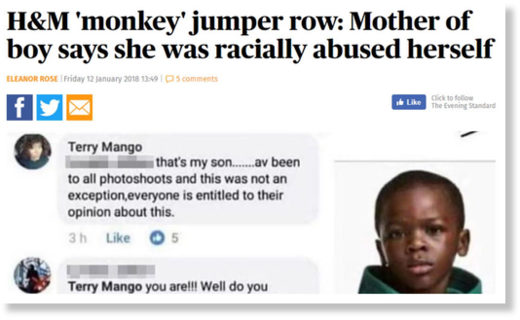 Terry Mango told the BBC that she and her family had to move to a secret location because of ‘security reasons’.

On January 13th, 6 days after the initial tweet from Stephanie Yeboah, the outrage spread to the source of the ‘problem’ – South Africa – where members and supporters of the Economic Freedom Fighters party decided to take ‘affirmative action’ in the form of trashing six H&M stores.

In case you were wondering, the Economic Freedom Fighters party “draws inspiration from the broad Marxist-Leninist tradition and Fanonian schools of thought in their analyses of the state, imperialism, culture and class contradictions in every society and criticizes the African National Congress and their primary opposition, the Democratic Alliance, for their allegedly pro-business stances”

The ‘scandal’ put H&M in a position where they had no choice but to effusively apologize for their incredibly racist use of a black boy in an advertisement. But it was the ease with which they adopted the radical leftist rhetoric that was really disturbing. H&M management closed their ‘mea culpa’ with:

“Racism and bias in any shape or form, conscious or unconscious, deliberate or accidental, are simply unacceptable and need to be eradicated from society.”

In stating that unconscious or accidental ‘racism and bias need to be eradicated from society’, H&M were merely repeating the well-established mantra of radical leftist organizations and individuals and the many institutions, public and private, and government agencies that have already whole-heartedly adopted it. The problem, and danger, however is the question of who gets to define what constitutes ‘racism and bias in any shape or form’, and who gets to decide what ‘unconscious’ is. The answers to those questions are, in fact, already easily discernible from the many writings of left wing activists that are also nonchalantly parroted by most of the mainstream media.

A similar move is underway to convince men that they are all unconscious misogynists and must accept that fact and take instruction from feminists as to how they should not only comport themselves but think. This campaign is being actively supported by institutions, corporations and governments, not just in Western nations but around the world. The French government, for example, has recently tabled a law that would make whistling, ‘cat calling’ or asking for a woman’s phone number, a crime.

The grand irony is that the only reason this non-situation escalated so far is the fact that anti-racism has been so successful – there are very few actual racists in the West. The fact is, just like the family of the young boy in question, the people in the photo shoot did not know that associating the word “monkey” with a black child would in any way be perceived as racist – because they were not racist. So the very fact that H&M is by all appearances NOT racist (they used a “diverse” selection of child models, for example) is then used by the SJWs as proof that they ARE racist. Heads they win, tails you lose.

Another important point that was studiously ignored by most commentators on the ‘jungle monkey’ debacle is that there was no victim. No one was harmed or oppressed. The family of the boy are annoyed at the activists, not at H&M who employed their son. But that’s the persistent theme of these kinds of ‘outcries’ about racism from the radical left; individuals and groups who are suffering in some way (or not at all) are co-opted by the radical narcissists on the left and used to promote their own interests and will to personal power.

Strangely enough, this upsurge in radical leftism and its widespread promotion by the media seems to provoking not just a conservative backlash but the ‘creation’ of conservatives in the sense that otherwise ‘middle of the road’ people are discovering or rediscovering their fundamentally conservative world view that is defined by their rejection of the extremist left view. So while the supposed goal of the left is to convert conservative-minded white people to the leftist cause, they are in fact increasing the number of people who hold to traditional values and do not want any leftist-defined sea change to society. You can always tell when your plan is ill-conceived when, half way through its implementation, you are achieving the exact opposite of what you want. That said, I won’t be holding my breath for any leftist radicals to wake up to this self-evident fact.