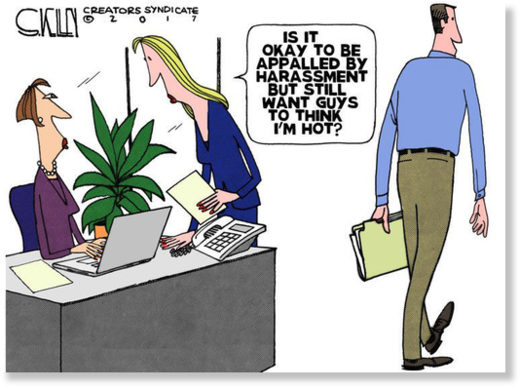 The short video below is the latest of many dozens of interviews that Jordan Peterson has given over the last year, yet it stands out as one of the very few that were conducted by a reporter that was either hostile towards, or largely clueless about, Peterson’s agenda. In their short write-up on their website, Vice News describes Peterson’s book, 12 Rules for Life, as “a mix of pop psychology and self-help” which, for anyone familiar with the book or Peterson’s work, tells you all you need to know about Vice News.

The interview with Peterson is less than 6 minutes long, yet even in that short period of time, the Vice reporter manages to expose his own ignorance while Peterson conveys the depth of his thinking on the issues of the #metoo movement, sexual harassment in the workplace and ‘political correctness’ in general.

The Vice reporter gets straight to the point when he suggests that political correctness in universities is confined to university campuses and that it is not “veering towards apocalypse“. Peterson points out that “it’s spreading into corporations throughout the US via HR departments“. Which is true. The reporter counters with “yes, but in what ways that are not ‘hey, how about you not grab the ass of your coworker…”

Peterson gives the example of NBC regulating hugging among employees. The reporter suggested that this was “a response to generations of men taking advantage“. Peterson tries to help him understand the deeper point, that “it’s not easy to solve a complicated problem and ready-made ideological solutions don’t work, they make it worse“, which the reporter ignorantly dismisses as “just a maxim“, when it clearly is not in this instance, because it directly relates to the deeper point Peterson is making.

So Peterson again tries to explain by saying that it’s not about a single question but a series of questions that no one is posing. He then offers one of those questions: “Can men and women work together?” This is an important question, but the Vice reporter thinks it’s ludicrous: ‘Of course men and women can work together!’ The Vice reporter works with many women! Yet the point is that, if employers have to resort to regulating hugging between workers, then the fundamental question of whether or not men and women can work together SHOULD be asked, because that is what is implied by taking the step of regulating hugging.

And where do we draw the line? If employers regulate hugging, but men still ‘harass’ women in some way, what is the next step? What is the last step? Segregation? If so, have we not then answered the question of whether or not men and women can work together? Let’s assume no one wants to go there. So how do we solve this alleged problem that has all of Western society in its thrall? Peterson asks another of the unasked questions relating to ‘sexual harassment’ in the workplace, which must be asked if the problem is to be properly addressed and solved: “Should women wear makeup in the workplace?” The Vice reporter laughs at what strikes him as an outrageous question. But it’s not.

The source of sexual harassment in the workplace (and elsewhere) is men, right? NBC has taken the step of regulating hugging between coworkers in an effort to prevent lecherous men from exploiting women. Is that going to work? Maybe, maybe not. But if the goal is to sexually sanitize the workplace, we need to look at all possible factors contributing to the problem. One factor, clearly, is women who wear makeup to work. Peterson explains, accurately, the reason (most) women wear makeup: to increase their sexual attractiveness to men. Why would women continue to do that if their declared goal is to prevent unwanted sexual advances? The answer, of course, is that women would continue to do that if they are completely unaware of their own primitive biological drives, supplanting the reality of those drives with a carefully crafted (albeit unconscious) narrative of innocence and purity that dumps responsibility for sexual attraction at the feet of men only.

Peterson thinks not just one step ahead, but many. He does his best to see where ideas, and especially ideologies, will lead societies, and demands that everyone adhering to or promoting an ideology be damn sure they have thought seriously about the possible or probable destination. No one can be 100% sure about the end result of an ideology, but only a fool would disregard the lessons of history, particularly those of the 20th century, when in a very short period of time, major ideologies swept human societies down the road to massive death and suffering.

That death and suffering didn’t just come out of nowhere. Each step was preceded by a smaller step that made tragedy just a tad more possible than it was before. Often those steps took the form of new, vaguely defined “crimes” that seemed to make sense at the time and address a real issue, but which were then applied in truly Kafka-esque fashions that even their supporters didn’t see coming. That is what is happening today, and that is what Peterson is bringing attention to. For example, no one disagrees that rape is abhorrent, but rape has been steadily stripped of its semantic content to the point that it can now apply to consensual sex that the woman decides she didn’t want at any time after the act, whether the next day, or weeks or months later. The same goes for “harassment”, which can now be applied to any behavior the “victim” finds offensive, including any form of unwanted sexual attention. That can be a well-intentioned hug, an awkwardly phrased request for a date, or a look that lingers for a second too long.

Feminists like the Vice reporters may think that it’s a good thing that such behaviors are being steadily responded to with stronger and stronger consequences for the “offender”. But what such feminists don’t seem to realize – or don’t seem to care about – is that by putting the onus of proof on the accused instead of the accuser, any man (and in the future, any woman) may find themselves accused of crimes they simply did not commit. That makes everyone a potential offender. All it takes is an accusation, a denunciation. That is a very dangerous step to take. And unfortunately for all of us, we’re already well on our way.

Too many times in the past, human society has sleepwalked into massive upheaval and suffering. Very few saw what was coming and attempted to avert disaster. Most didn’t even realize their predicament until the point of no return had been passed. If we are to avoid yet another repeat of history, people like Peterson are desperately needed to sound the warning bell well ahead of time.