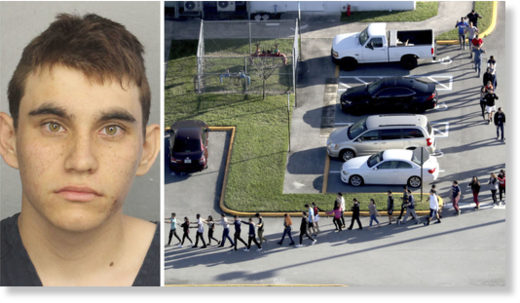 One more school shooting in the USA, one more round of inane squabbling, finger pointing and calls to ‘ban guns’ from one side and ‘deal with the mental health problem’ from the other. As is true for most polemic issues hotly debated by ignorant human beings, the truth probably lies somewhere in between, or somewhere else.

If there were no (or very few) guns in US society, there would be fewer shootings, and therefore fewer deaths, but not fewer attacks by ‘mentally ill’ people. It seems reasonable to assume that if the number of school or mass casualty shootings in America were replaced by school or mass casualty knife attacks, it would still be a serious social problem. So it seems more rational and productive to focus on solving (or at least better understanding) the problem of mental illness in order to reduce the number of mass casualty attacks.

In Thomas S. Szasz’s book, The Myth of Mental Illness, he makes a strong case that what psychiatrists have come to call ‘mental illness’ is not an illness at all but rather a reaction by a person to their immediate familial, cultural and social environment. As Szasz writes:

“The phenomenology of body illness is indeed independent of the socioeconomic and political character of the society in which it occurs. But this is emphatically not true for the phenomenology of so-called mental illness, whose manifestations depend upon and vary with the educational, economic, religious, social, and political character of the individual and society in which it occurs.”

“Mental illness is not something a person has, but is something he or she does or is.”

Perhaps that is not all that mental illness is. Biology and heredity play a big role in many so-called mental illnesses. But Szasz has a point. Much of what we call mental illness is more a sign of character disturbance than it is some kind of mental ‘disease’. Szasz portrays ‘mental illness’ as essentially a game that a person plays in order to get something they need – but are unable to honestly or forthrightly ask for it from others or from society at large, or attain for themselves.

“…the hysteric plays at being sick because he is afraid that, if he tried to participate competently in certain real-life activities, he would fail.”

“…the obligatory nature of the care required generates a feeling of helplessness in the person from whom help is sought. If a person cannot, in good conscience, refuse to provide help – and cannot even stipulate the terms on which he will supply it – then truly he becomes the help-seeker’s slave.”

In the most extreme cases – like serial killers and school shooters – such individuals may even intentionally fake mental illness in order to get what they want, e.g., faking paranoid schizophrenia in an insanity defense plea or blaming one’s mother for how badly they turned out as adults.

In the book, Inside the Criminal Mind, Stanton Samenow describes how and why criminals think the way they do and why the recidivism rate is so high. The problem, according to Samenow, is that treatment programs for criminal offenders are based on the faulty premise that criminals, deep down, are really law-abiding citizens played a ‘bad hand’ by life in the form of unjust social conditions or other environmental factors. If they are given a ‘hand up’ (and hand-outs) and shown the error of their ways, they will become productive members of society.

As a result of his in-depth interviews and experience with criminals, however, Samenow convincingly argues that most criminals engage in criminal activity not because they were abused by society or because they are mentally ‘ill’ but because they have an inflated self-image and an overweening sense of entitlement. They believe they are much better, smarter, more handsome, charming, etc., than the average person and, therefore, are not obliged to live by the laws that ordinary people live by. For sure, many of them have had painful experiences in their lives that would justify a sense of anger and resentment, but rather than shoulder this burden and get on with living their lives like the rest of us, those with a ‘criminal mind’ nurture their resentment and anger and use it to validate their innate sense of entitlement to take ‘revenge’ on society to secure an easy life, which they think is what they deserve and what ‘society’ owes them.

Such ‘criminal minds’ may not even have what ordinary people would consider adequate reasons for anger and resentment. They may consider themselves ‘CEO material’, but expect to get that position and the riches it entails without putting any actual effort or work into achieving it. They want all the rewards, but none of the societal rules in place to get there. As Andrew Lobaczewski put it in Political Ponerology:

To individuals with various psychological deviations, the social structure dominated by normal people and their conceptual world appears to be a “system of force and oppression”. Psychopaths reach such a conclusion as a rule. If, at the same time, a good deal of injustice does in fact exist in a given society, pathological feelings of unfairness and suggestive statements emanating from deviants can resonate among those who have truly been treated unfairly. …

In the psychopath, a dream emerges like some Utopia of a “happy” world and a social system which does not reject them or force them to submit to laws and customs whose meaning is incomprehensible to them. They dream of a world in which their simple and radical way of experiencing and perceiving reality would dominate; where they would, of course, be assured safety and prosperity. In this Utopian dream, they imagine that those “others”, different, but also more technically skillful than they are, should be put to work to achieve this goal for the psychopaths and others of their kin. “We”, they say, “after all, will create a new government, one of justice”. They are prepared to fight and to suffer for the sake of such a brave new world, and also, of course, to inflict suffering upon others. Such a vision justifies killing people, whose suffering does not move them to compassion …

Such individuals dream of imposing their power and their different experiential manner upon their environment and their society. Unfortunately, in a psychologically ignorant society, their dreams have a good chance of becoming reality for them and a nightmare for others.

The Florida shooter, Nikolas Cruz, was a 19-year-old high school drop-out who, no doubt, had reasons to be angry at American society and the high school he was expelled from. But based on the testimony of those who knew and lived with Cruz, his problems were no worse than those of many other 19-year-old kids.

Cruz’s mother, who had adopted him the day he was born, died of pneumonia last year, leaving him without parents. He stayed briefly with a family friend but wanted to move on and asked a former school friend if he could move in with him. The boy’s parents, Kimberley and James Snead, agreed.

“I told him there’d be rules and he followed every rule to the T,” James Snead said. “He was very naïve. He wasn’t dumb, just naïve.” Cruz didn’t know how to cook – the family had to show him how to use a microwave – or how to do his laundry and also had to learn to pick up after himself.

He didn’t drive but bought a bicycle and rode it to work at a nearby store. The Sneads insisted he enroll in adult education classes run by the school district and drove him to school each day. He didn’t have much time to himself. He seemed to be doing well and wanted to be an army infantryman. He was excited when an army recruiter visited school recently.

According to an acquaintance interviewed by CNN, Cruz would introduce himself with: “Hi, I’m Nick, I’m a school shooter.”

There are online posts in which Cruz writes: “I wanna shoot people with my AR-15” and “I’m going to be a professional school shooter.”

This summer a Nikolas Cruz made an online comment in response to a story about a disgruntled doctor in New York who used an AR-15 to shoot seven people, killing one and wounding six others.“Man, I can do so much better,” he wrote.

None of these details (or any others about Cruz’s life) fit the bill for a ‘mentally ill’ kid who, seething with profound and unexpressed rage, decided to murder 17 people at his former school. However, there are also reports that he was taking antidepressants and had “emotional issues”. Police had been called to his residence 39 times over the last 8 years. But the reason that Cruz went on his shooting spree is more likely to be much more banal: he wanted the attention and notoriety to which he felt entitled, and ‘being a school shooter’ was his chosen way to get that attention.

As noted by Szasz, the manifestation of so-called mental illness “depends upon and varies with the educational, economic, religious, social, and political character of the individual and society in which it occurs.” Cruz grew up in a modern American society where citizens are imprinted from an early age with the idea that they are members of an exceptional nation and encouraged to pursue a privileged ‘American dream’. Some Americans internalize that fantasy, and when real life diverges sharply from the dream, some of them become resentful. But those like Cruz seem to take on that resentment to a pathological degree: they seek to take revenge on the society that promised them so much and delivered so little. For them, the American dream isn’t one of equal opportunity and making something of yourself despite the odds – with hard work. It’s the dream of grandiose entitlement to get what they want simply because they want it.

We can also see a reflection of this narcissistic world view in American foreign policy, where the USA sees itself as entitled to rule the globe unopposed. When reality intrudes – for example in the case of Russian push back in the Middle East – the Empire throws a tantrum and lashes out at the ‘enemy’ in a violent way.

Interestingly, the two sides of that destructive ‘coin’ – entitlement and resentment – seem to be the main motivations for the radical leftist ideologues that have been causing so much division in American society over the past year or two. So maybe Cruz’s internal make-up and external world view is shared by far more SJWs than conservative gun-toting right wing types.

1 thought on “Florida School Shooting: A Culture of Narcissistic Entitlement and Resentment”