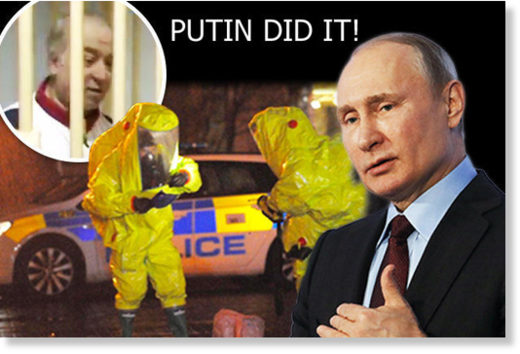 As you may have noticed from the title, I’m cutting to the chase on this one. Context is everything these days when attempting to understand major geopolitical events.

Sergei Skripal is a former Russian army colonel who worked for Soviet military intelligence during the Cold War. In the late 1990s he was recruited by MI6 as a double agent. In December 2004, Skripal was arrested and charged with “high treason in the form of espionage”, convicted and sentenced to 13 years in prison. In July 2010, he was released as part of a spy exchange for ten Russian agents who had been arrested in the United States as part of the ‘Illegals Program’. Skripal was then settled in the UK by MI6 in the town of Salisbury. Yesterday he was found on a public bench with his 33 year old daughter, Yulia. Both were incoherent and/or incapacitated. When medical personnel arrived, some of them also allegedly became ill.

Within a few hours of the discovery of the pair, the British media and politicians had decided that they had been poisoned at the behest of Vladimir Putin himself, with some as yet “unknown substance”. British newspapers said it, so it must be true. British Foreign Secretary, Boris Johnson, threatened fresh sanctions against Russia if it is proven to have poisoned a Russian double agent and branded the country “a malign and disruptive force”. No evidence was cited to back up any of these allegations, because everyone ‘knows’ that Putin is a ruthless dictator who just loves to bump off people that he doesn’t like. British newspapers and politicians said it, so it must be true. 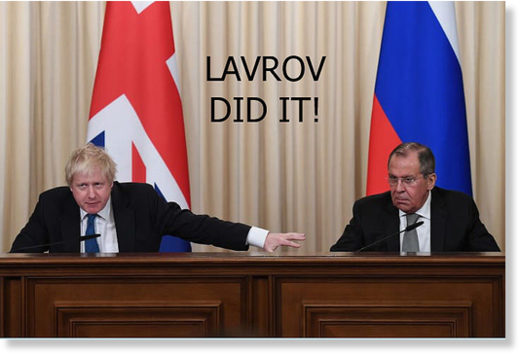 For the unfortunate cretins who still refuse to swallow the anti-Russia narrative, the British government and media duly require you to remember the case of Alexander Litvinenko, another former Russian intelligence agent who became a British intelligence asset. Litvinenko was, ‘everyone knows’ murdered in 2006 by polonium that was given to him by two Russian spies on the ‘direct orders of Putin’. The problem is that there was, and is today, no hard evidence for this claim. But who needs evidence when you have a propaganda bullhorn to addle the public brain. Mush-for-brains are highly averse to evidence anyway. It’s much better to quote the words of people like Alexander Goldfarb, long term anti-Putin activist, author of Litvinenko’s death bed testimony accusing Putin, and promoter of the activities of ‘Pussy Riot’. On the Skripal situation, Goldfarb, who was (coincidentally) a close friend of Skripal, said:

“Any reasonable person would think immediately that Russia had the opportunity, motive and a prior history of this kind of crime so it is reasonable to think it was involved in this attack. This is the Kremlin’s modus operandi. There are plenty of precedents. ‘What’s interesting now is that this happens just before Russia’s presidential election.”

The Skripal event, and the way it is being reported, cannot be understood except in the context of the vicious and persistent defamation and slander campaign that Western governments and media have waged against Russia over the past several years. To put it another way, the Skripal event is simply one more chapter in that defamation campaign. The reasons for the West’s anti-Russia hysteria have everything to do with the fact that, over the past 10-15 years, Russia has re-emerged as a powerful independent player on the world stage, capable of pushing back long-standing Anglo-American designs on global control. Exceptional nations with a serious megalomaniacal streak (and their lackeys) don’t like being pushed back, not even an inch. When they don’t get their way, and lack the cojones to engage in a fair fight, they resort to dirty tricks and smear campaigns, at which they are very adept.

But really, is there NO evidence? Well, the UK Independent informed its readers today that, while there is still no word on any toxicology reports, ‘some experts’ suggest that Skirpal and his daughter may have been poisoned by ‘nerve agents’ because a witness described Mr Skripal and his daughter vomiting, twitching and unable to move. The Indy hacks then informed us that among the most powerful nerve agents is VX, “a toxin developed at the British Ministry of Defence Porton Down facility, which was used to assassinate Kim Jong-nam – the brother of North Korean leader Kim Jong-un, at Kuala Lumpur International Airport in February 2017″.

Without a hint of irony, Salisbury MP John Glen told the BBC today: “Fortunately just down the road in my constituency at Porton Down defence, science and technology labs exist and they will have taken the substance and will be trying to evaluate what they can, no doubt.” Indeed, Porton Down is about 5 miles from the bench where Skripal and his daughter were found. Very fortunate indeed, and more than a little coincidental.

The name of the research facility at Porton Down has undergone many changes over the years, although the words “chemical” and “defence” have been consistently used, giving the impression that…well….that it is used only for research into “defence” against “chemical” weapons. In 1991, however, the UK “Centre for Applied Microbiology and Research” moved to the Porton Down facility and its name was changed to the “Chemical and Biological Defence Establishment”, reflecting the addition of biological warfare agent research to the list of “services” that Porton Down offered. In 2004, with PC culture in full bloom in Western nations, the name was sanitized somewhat to ‘Defence Science and Technology Laboratory’.

Some of the known highlights of the Porton Down facility include:

When the foot-and-mouth virus ravaged British cattle in 2002, it was later revealed that the outbreak was likely caused when a phial of the virus ‘went missing’ from the facility.

Between the 1950s and 1980s, 20,000 ‘volunteers’ were unwittingly involved in a chemical and biological weapons trials at Porton Down that left them with long-term ill health.

20-year-old Ronald Maddison died 45 minutes after 200mg of the deadly nerve agent sarin was dripped onto a patch of uniform taped to his arm at Porton Down. He was told he was testing a flu vaccine.

While no official source has confirmed it (for obvious reasons) it’s highly likely that Skirpal was settled by MI5 in Salisbury because his new job was five miles away at Porton Down. Perhaps the most dangerous part of working for Western intelligence agencies in the 21st century, particularly if you are a Russian double agent, is that your life is implicitly forfeit in service to the West’s new great game of ‘stop Russia at all costs’. Litvinenko and now (most likely) Skirpal and his daughter found that out a little too late.