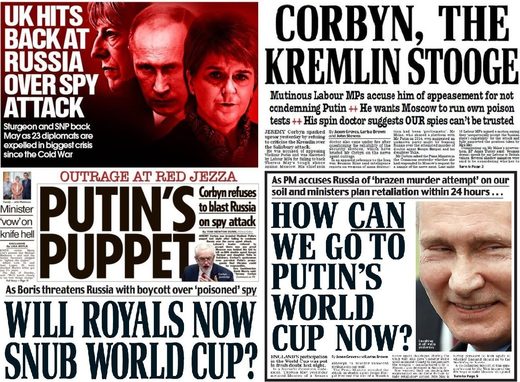 By now anyone with an opinion on the Skripal poisoning has already decided if they believe the official narrative or not. Still, the event and the ongoing media coverage around it presents an opportunity to understand more than we might think.

The British government claim is that a “military-grade nerve agent”, one of a group of nerve agents supposedly called ‘novichok’ (which simply means ‘newcomer’), was used by Russia on Sergei Skripal and his daughter in Salisbury. They reach the conclusion that Russia is to blame because, they claim, the nerve agent used is “of a type developed by Russia.”

Russian daily newspaper Kommersant recently released a 6-page document they claim constitutes the British government’s official case against Russia. They summed up the ‘evidence’ as follows:

Note the 2nd point, that “Novichok is a group of agents developed only by Russia and not declared under the CWC.”

In 2016, Iranian scientists synthesized five ‘Novichok’ agents and the data was added to the Organisation for the Prohibition of Chemical Weapons’ Central Analytical Database (OCAD).

In an interview with AFP, the former Russian scientist who participated in the development of “Novichok” in Russia in the 70s and 80s, Vil Mirzayanov, stated that if Russia was not responsible for the poisoning:

“The only other possibility would be that someone used the formulas in my book to make such a weapon.

Mirzayanov’s book, published in 2008, contains the formulas he alleges can be used to create “Novichoks”. In 1995, he explained that “the chemical components or precursors” of Novichok are “ordinary organophosphates that can be made at commercial chemical companies that manufacture such products as fertilizers and pesticides.”

So the British government claim that this type of nerve agent can only be Russian, and was only developed by Russia, is false. In fact, in her statement to the House of Commons on 12th March 2018, British Prime Minister Theresa May directly contradicted that claim when she said:

“It is now clear that Mr Skripal and his daughter were poisoned with a military-grade nerve agent of a type developed by Russia. This is part of a group of nerve agents known as ‘Novichok’. Based on the positive identification of this chemical agent by world-leading experts at the Defence Science and Technology Laboratory at Porton Down.“

In the world of nerve agents, in order to positively identify a sample, you must have your own sample for comparison and positive identification.

In a judgement at the British High Court on 22nd March on whether to allow blood samples to be taken from Sergei and Yulia Skripal for examination by the Organisation for the Prohibition of Chemical Weapons (OPCW), evidence submitted by the Porton Down laboratory to the court (Section 17 i) stated:

“Blood samples from Sergei Skripal and Yulia Skripal were analysed and the findings indicated exposure to a nerve agent or related compound. The samples tested positive for the presence of a Novichok class nerve agent or closely related agent.“

Again, Porton Down must have had a sample of the alleged nerve agent used to poison Skripal and his daughter. That can mean only one of two things: that Porton Down obtained the nerve agent from some other party, or manufactured it on site. Porton Down is, after all, in the business of producing chemical weapons (ostensibly to test them on anti-chemical weapon equipment).

Note also that the wording used in the quote above includes the possibility that the agent used on Skripal was not even ‘Novichok’ but rather a “related compound” or something “closely related.” So even Theresa May’s statement that the British MoD had “positively identified” ‘Novichok’ seems false.

In an interview with German Deutsch Welle, bumbling UK Foreign Secretary Boris Johnson was directly asked if scientists at Porton Down had samples of ‘Novichok’, to which he replied:

“They do. And they were absolutely categorical and I asked the guy myself, I said, ‘Are you sure?’ And he said there’s no doubt.”

So the only thing we can presume to be 100% certain of in the poisoning of Skripal and his daughter is that the nerve agent used was in stock at Porton Down, 8 miles from the site of the poisoning.

In the 5th point in the British government 6-page ‘dossier’, they claim:

“We are without doubt that Russia is responsible. No country bar Russia has combined capability, intent and motive. There is no plausible alternative.”

We know that other countries have the capability. Claiming to have no doubt about someone’s intent is nonsense. So we’re left with motive. Did Russia have a motive to poison Skripal and his daughter? Motives for a course of action are intrinsically linked to the result of the action. The obvious and predictable result of using a nerve agent that was originally developed in Russia in the 1970s to poison a former Russian spy living in the UK and working for British intelligence is that Russia would be blamed and universally condemned for it. So if Russia was motivated to further downgrade its reputation on the international stage, then sure, Russia had motivation to poison Skripal and his daughter.

The problem is that there is no evidence that Russia desires to damage its own reputation in this way. Is there evidence that anyone else has such motivation? For those that have been paying attention to world affairs over the past 6 or 7 years, I’ll presume that you don’t need me to answer that one.

So when we remove the unfounded and contradictory claims around the Skripal poisoning, the actual facts of the case are rather limited:

I’ve heard people make the argument that any investigations of what really happened in Salisbury can only ever be guesswork, that we can never be 100% sure. Of course, that’s true to a degree, especially when dealing with evidence which may be held back from public disclosure because of reasons of “national security”. But such people tend to use this line of thinking simply to avoid taking a position, because taking a position scares some people, especially if it is not the official position. It’s also not very realistic or practical. If we were to hold all statements and claims to the same level of proof, our court systems would become obsolete. Rarely is there enough evidence to find a criminal guilty with a 100% degree of certainty. That’s why courts hold the standard of “beyond a reasonable doubt” and allow for circumstantial evidence.

Insistence on absolute proof fails to recognize that, as humans, we don’t navigate our lives and make decisions on the basis of 100% proof. Instead, we use something akin to ‘past form’. For example, if I intend to take the train at 9.15am from platform 1 in the morning, I cannot be 100% certain that the train will be there at 9.15am, or that it will be there at all that day. Instead, I actively assume that it will be there based on the circumstantial evidence I have accrued through repeated observations that when I go there at that time the the train is there. You could even say that the train is very likely to be there because it has the means, motive and opportunity.

That’s how we go about our daily lives, at least. But in cases of guilt and innocence we probably need a higher standard. Many suspects may have means, motive and opportunity at the same time. That doesn’t mean they’re all guilty. And a history of similar crimes does not necessarily mean that a suspect is guilty of one particular crime. So what to do in a case like the Skripal poisoning? The only thing we can do is compare competing hypotheses and the degrees to which they are consistent to all the facts available. In other words, which scenario is more likely given the known facts?

In answering the question of who poisoned Sergei Skripal and his daughter, we lack 100% proof that the British government (or some element thereof) was responsible for the attack, just as we lack 100% proof that the Russian government was responsible. In fact, the evidence and reasoning provided by the British government does not actually support the Russian hypothesis over competing hypotheses, because we would see the same evidence if the attack were carried out in order to frame Russia. If evidence applies equally to two or more competing hypotheses, naturally that evidence cannot be used to support one hypothesis over the other, which is precisely what the British government is doing.

In contrast, the British government’s apparent access to the precise nerve agents in question, close to where Skripal lives, their full access to Skripal himself, their past form in fabricating evidence of chemical weapons usage by other states, and their clear intent to wage a vicious and underhanded demonization campaign against Russia, all combine to allow us to actively assume that the poisoning of Skripal and his daughter was the work of the British government itself. Is it beyond a reasonable doubt? Perhaps not, but it is currently the only hypothesis that makes sense given the evidence available. And until more evidence is made available, it is the only reasonable conclusion to make.