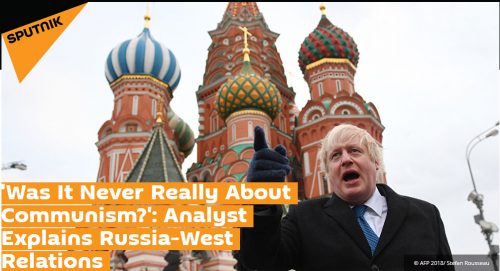 Sputnik: In your view, what consequences can these sanctions have on US-Russia relations?

Joe Quinn: Russia-US relations are already at a historic low point, sanctions therefore obviously will only worsen the relationship. That said, there is a positive result from such actions by the US in that it encourages Russia to seek other more reasonable international partners with whom to do business. This can only be good for diversifying the Russian economy and creating a stronger opposition block of nations that can effectively challenge the US vision of a unipolar world.

Sputnik: The move was already called hostile and baseless by some Russian officials, what is your take on that?Joe Quinn: Well the move obviously was hostile and it was clearly baseless because it was justified by the lie told by British Foreign Minister Boris Johnson that it was known that the alleged ‘nerve agent’ used to poison Skripal and his daughter was made in Russia. There is no evidence that the nerve agent was produced in Russia.

This latest round of sanctions must be seen in the context of the propaganda offensive that the US and UK have been waging against Russia for several years. They are an attempt to blacken Russia’s name in the minds of people and politicians around the world. But the question is, to what end? These kind of attacks point to Western nations, in particular the US and UK, viewing Russia as a serious threat to their own positions in global power politics. Of course, that view is nothing new, it’s as old as the Cold war, and it’s obvious at this point that the cold war never ended — at least from the Western perspective. But it also brings up the question of what the Cold War really was about. The Cold War was defined as an existential fight against the political and economic ideology of Communism, the clash of civilizations as it were. But the Soviet Union and Communism ENDED, and yet the Anglo-American attacks on Russia have not and are today more intense than ever. So do we have to rethink the entire cold war rationale? Was it never really about Communism? Events today would seem to suggest so, that there is something else about Russia and its people that troubles Western powers.

At this point Russia can easily dismiss the propaganda offensive because it is obviously nonsense, it can simply respond with the truth and that will be enough on that score. But it needs to watch carefully for the possible economic moves aimed at damaging the Russian economy that will be made using the propaganda as justification. Russia’s only real options are to continue doing what it has been doing – asserting itself and expanding its influence around the world, or even increase the tempo of that because it seems that is seen as a real threat by the Anglo-American establishment.

Sputnik: Do you think there will be any countermeasures introduced by Russia in the near future?Joe Quinn: Russia can impose similar measures against the US and the UK and any other European nation that has participated in these attacks on Russia, although it must be careful not to engage in any self-defeating moves whereby the Russian economy would suffer. In my opinion the most appropriate response from Russia would be to continue to challenge the US and British anti-Russian narrative with the truth and to continue doing what it has been doing – asserting itself and expanding its influence around the world, or even increase the tempo of that because it seems that is seen as a real threat by the Anglo-American establishment.