I’ve noticed (it wasn’t hard) that, just like 4 years ago when he ran for the GOP nomination (and FOX News famously did not invite him to a GOP debate featuring all other presidential candidates), Ron Paul is once again being flagrantly ignored by the mainstream media for the 2012 nomination.

While John Stewart’s Daily Show simply serves to make serious matters ‘funny’, his summation of the situation is spot on (even if it’s all ‘just for laughs’).

This is how ‘democracy’ works in the USA. The mainstream media acts as the fifth branch of government (the first four being, executive, legislative, justice and corporate). In other allegedly ‘democratic’ countries, the existence of all applicants for the stewardship of the nation (even if they are picked to run to lose) is at least recognised. Not so in the grand ‘ol US of A. There, a candidate can have the support of the majority of the population and be deliberately sidelined by the media.

In a country where almost no one knows anything about anything unless it comes from the unashamedly partisan ‘impartial’ media, the result is that, when the people’s choice disappears off the radar and some war-mongering reactionary psychopath ‘wins’, everyone thinks that they were the only ones who didn’t like him.

The question of course is, who decides who gets promoted and who gets panned? Given their monopoly on the dissemination of information to the public, it’s obvious that the handful of corporate media moguls that control the entire industry (in the USA and worldwide) are in on it. But it’s hard to imagine that ‘the media’ alone could wield such power without the help of some shadowy ‘shadow government’-type organisation. Then again, they could well be one and the same.

But how then do we account for the tarted-up media grunts (aka ‘anchors’) cheerily censoring Ron Paul? How do they justify it to themselves? Are they also part of the plot? Or do they simply follow orders because they are well aware that an animated mannequin could easily replace them and no one would know the difference?

While the answer may well be ‘all of the above’, I think there’s an additional element that has contributed much to the creation of the type of sick and crumbling ‘democracy’ we see in the USA today, and that element is perfectly portrayed, albeit subtly and quite coincidentally, in a recent media (non)-report on Ron Paul’s campaign.

See if you can spot it: 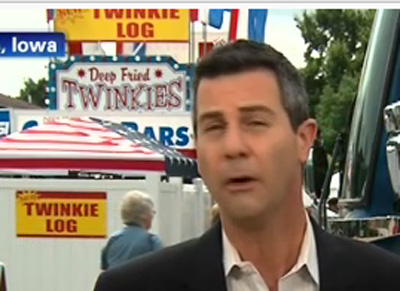 Any country that not only produces a popular ‘food’ that doubles as fire-retardant insulation, but then proceeds to deep-fry it (and eat it in vast quantities), can’t complain when it becomes apparent that their ‘democractic process’ is about as pure and natural (and as good for the health of the average American) as a Twinkie.

1 thought on “Deep-Fried ‘Democracy’ In The USA”