The hypocrisy and lies around the alleged death of Gaddafi have gone too far, for me at least. I find it hard to stomach the statements by Western leaders about Gaddafi’s ‘crimes’ as they gloat over the televised brutal murder of some guy in Libya.

“a day to remember all of Gaddafi’s victims, from those who died in connection with the Pan Am flight over Lockerbie, to Yvonne Fletcher in a London Street, and obviously all of the victims of IRA terrorism who died through their use of Libyan Semtex.We should also remember the many many Libyans who died at the hands of this brutal dictator and his regime.”

Omitted from the end of Cameron’s statement was  ‘and we should also remember that I’m lying through my teeth.’

Of course, British tabloids like The Sun, are only too happy to parrot Cameron’s nonsense in typical jingoistic fashion: 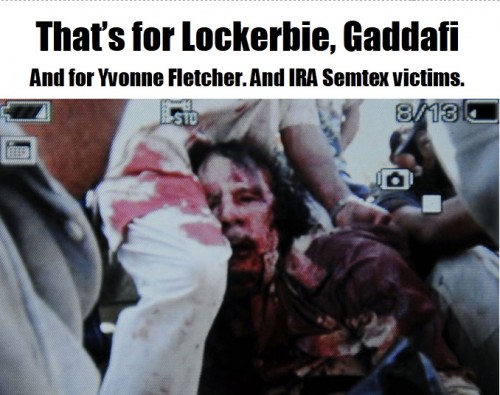 But let’s have a quick look at ‘Gaddafi’s crimes’ as reported by Cameron:

The bombing of Pan Am Flight 103 over Lockerbie Scotland. This was clearly a false-flag operation designed to demonise Libya. See the web site of the father of one of the victims Dr. Jim Swire for the evidence. Libya has never accepted responsibility for the bombing of Flight 103, but instead paid compensation to the families to “buy peace” i.e. reintegration into the Western elite.

The murder of Police Constable Yvonne Fletcher in St. James’ Sq. London, April 1984. Blamed on Libya, there is in fact a wealth of evidence to support the idea that Fletcher was shot by a CIA/MI6 operative in an effort to, again, demonise Libya. Despite the fact that a Channel 4 Dispatches documentary spelled it out in scientific detail, Cameron is happy to propagate the lie.

The ‘victims of IRA terrorism’ through the use of Libyan Semtex. There is little doubt that, on a few occasions, the IRA leadership successfully bought Libyan weapons. There is also little doubt however that all alleged major IRA attacks that involved the death of civilians were the work of British intelligence. Consider this interesting link between alleged IRA attacks and the Lockerbie bombing:

Over the 1970s and early 1980s Dr.Thomas Hayes progressed to Head of Department at the British Royal Armaments Research Establishment [RARDE].  His testimony was central to the bogus Lockerbie verdict. A Parliamentary inquiry into the 1974 alleged IRA ‘Maguire Seven‘ bombing and trial discovered that key forensic evidence indicated the innocence of the accused. This evidence, that was known to Dr. Hayes and two RARDE colleagues, was not disclosed at the Maguire Seven trial.  The Maguire seven were freed on appeal after spending fifteen years in jail.

That just gives you a small insight into the lengths to which Western governments and ‘intelligence agencies’ have gone (and are prepared to go) to ‘protect their interests’. With the mainstream media bought and paid for, global corporate, fascist domination is a  done deal unless we all wake up to the reality of the situation and start calling it for what it is – bullshit, through and through.

So yeah, Cameron et al gloating and lying to the cameras; Hilary Clinton just happening to be in Libya a few days ago and demanding Gaddafi ‘dead or alive’ one day before someone looking a bit like him is produced from a ‘rat hole’ and then quickly executed and (soon to be) buried in a ‘secret location’ far from prying eyes; the deliberately conflicting stories of how he was killed being spread far and wide by the mainstream media; Gaddafi being feted (and armed) by British, French, American, Italian Prime Ministers and Presidents just a couple of years ago and then suddenly demonised as a ‘brutal dictator’ and his country and citizens bombed back to the stone age; – all of that pisses me off.  But what really concerns me here is not my own rising blood pressure, but the future of Libya. Already the vultures are circling, eying their prize in the form of Libya’s natural resources. Take it away French Minister of Defence Gerard Longuet:

Speaking in an interview to Le Monde on the day after Libya’s ousted strongman was captured and killed, Longuet said France is poised to take advantage of its leading role after a successful campaign.

France “will strive to play the role of a principal partner in the country where the leaders know they owe us a lot”.

“Everyone will throw their hat into the ring. We will neither be the last nor the most blatant,” he said of Libya’s relations with various Western countries in the coalition.[…]

Libya, which produced 1.6 to 1.7 million barrels of oil daily before the conflict, is a coveted market for many countries that are also eyeing potentially massive contracts for rebuilding its infrastructure.

Ah yes, ‘reconstruction’, Libyans can kiss goodbye to the relatively decent standard of living they enjoyed under Gaddafi.  Just look at post-invasion Iraq – ‘reconstruction’ there has left a country impoverished and in ruins, looted by the war-mongers.

But, getting back to my main point. Regardless of how many times the major mainstream media outlets tell us it is, that dead guy on the news isn’t, in my opinion, Gaddafi.

The real Muammar al-Gaddafi has some rather distinctive facial features.

One distinctive feature is ptosis. Also called ‘drooping eyelid’, ptosis is caused by weakness of the muscle responsible for raising the eyelid, damage to the nerves that control those muscles, or looseness of the skin of the upper eyelids. Whether a genetic trait or a result of aging or plastic surgery, Gaddafi had it. The other distinctive feature is some marked ‘wrinkles’ extending diagonally from the corner of his eyes across his cheek-bones. Check any images of the ‘brutal dictator’ from the past few years and you’ll see these prominent lines in every image.

Now, check out the ‘dead Gaddafi’:

Same man? Decide for yourself, but I already know too much about the MO of ‘intel agencies’ and Western governments to put any faith in their ‘official accounts’ of major global events, especially when they involve the expropriation of the natural resources of another nation. By the way, according to The Washington Post quoting ‘Libyan officials’, the guy they claim is Gaddafi was wearing a wig, or rather, according to them, the hair on the head of the man pictured above is not the hair of the real Gaddafi.

And lest I forget, I wanted to mention that I’m still eagerly waiting on the scenes of mass jubilation among Libyan citizens at the alleged demise of their ‘brutal dictator’. I suppose it might take a while to convince the 90% of the Libyan population that support Gaddafi that a Western puppet government and economic occupation by Western corporations is actually a good thing.

7 thoughts on “On the ‘Death’ of Mumar Gaddafi”