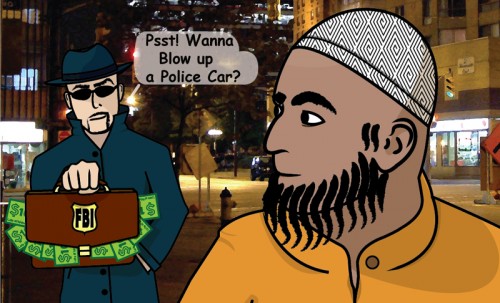 So a ‘lone wolf’ ‘home-grown terrorist’ has been apprehended, in the nick of time, by the FBI and NYC cops. Or so the story goes. The problem is, we’ve heard this one before, many times. Jose Pimentel, like so many others alleged ‘jihadis’ before him, is undoubtedly the victim of yet another FBI sting operation rather than a dangerous terrorist. FBI sting operation? “What’s that?” I hear you ask. Well, in case you’ve fallen victim to the 10-year-long ‘war on terror’ government and media mind-job, allow me to explain, or rather, allow me to point you to some fairly reliable sources.

Trevor Aaronson is a Fellow of the Investigative Reporting Program at the UC Berkeley Graduate School of Journalism. In August 2011, Aaronson published the results of his investigation into how the FBI runs a network of informants in Muslim communities in the USA. Aaronson’s mulltimedia investigation, which includes an 8,000-word cover story and the first and only publicly searchable, online, interactive database of more than 500 federal terrorism prosecutions since 9/11, is aptly titled “The Informants”. Among the investigation’s key findings:

– The FBI has 15,000 registered informants, many of them keeping watch on Muslim communities. Today, the FBI has nearly three times as many informants as it had 25 years ago.

– Of more than 500 federal terrorism prosecutions since 9/11, nearly half involved the use of an informant – many of them motivated by money or the need to work off criminal or immigration violations.

– Sting operations resulted in prosecutions against 158 defendants. Of that total, 49 defendants participated in plots led by an “agent provocateur” – an aggressive FBI operative who provoked the targets into committing their alleged terrorist acts.

– The FBI often uses the threat of deportation, as well as other forms of leverage, to win cooperation from informants.

The report reveals that in many of the stings, important meetings between informants and the unknowing participants are left purposely unrecorded, so as to avoid any entrapment charges that could cause the case to be dismissed.

Martin Stolar, who represented a suspect involved in a New York City bombing plot which was set-up by FBI agents, said that:

“The problem with the cases we’re talking about is that defendants would not have done anything if not kicked in the ass by government agents; they’re creating crimes to solve crimes so they can claim a victory in the war on terror.”

But there’s another obvious question here, which is, what is the difference between an FBI informant and a ‘lone wolf terrorist’? The answer is, nothing. The ‘lone wolf’ is simply the informant’s informant and is being manipulated by him (on behalf of the FBI and usually with money), in exactly the same way as the first informant. The only real difference is in the propaganda potential. The first informant remains unknown, the second is the patsy, dragged out at the appointed or appropriate time to pose as the ‘lone wolf terrorist’ du jour to serve the agenda of the psychopathic terror masterminds in the CIA, Mossad, MI5/6 etc.

So, I think we can say with a reasonable degree of certainty that the timing of Pimentel’s apprehension is cynical in the extreme. After all, the FBI had been grooming him for over two years via informants who posed as fellow ‘jihadis’. Equally cynical was Bloomberg’s use of a short and sweet pipe-bomb detonation video at his press conference:

Note that Bloomberg says that the police had to “construct a duplicate of an explosive device that the suspect built and then designated (sic) in the way that he intended to use his weapon.” Then we cut to a car blowing up. It doesn’t get any more crass than this folks.

Bloomberg fails, however, to offer any explanation of how Pimentel was going to get his ‘pipe bomb’ (pipe bombs are notoriously volatile and usually end up killing their creator) into a police car (or several police cars since in this full version of the press conference Bloomberg says that Pimentel was “plotting to bomb police patrol cars, and postal facilities” and “members of our armed forces returning from abroad”). It’s rather hard not to see that last comment about “members of our armed forces returning from abroad” as a direct response to the recent video of an Iraq invasion veteran letting loose on the NYC Police department’s brutalization of OWS protestors. It also suggests that the US government and corporate elite are beginning to feel a little uneasy about the growth and persistence of the ‘occupy’ movement.

So why did Mayor Bloomberg decide to go to press with this story now? Is it just a coincidence that Pimentel seems to have waited until the ‘occupy’ movements across the US had grown deep roots before deciding to assemble his purported ‘pipe bomb’ and force the FBI to act? Or is there a more insidious confluence of government agendas at work here? You’re damn right there are.

One of those agendas is, of course, the perpetuation of the ‘Muslim terror’ myth in the aftermath of the fabled death of Osama bin Laden. Perhaps that’s why we’re being sold the laughable story that Pimentel – a native of the Dominican Republic – was going to change his name to ‘Osama Hussein’. Of course, we only have the word of the FBI, Bloomberg and New York Police Commissioner Ray Kelly that that is in fact the truth. Police Commissioner Kelly also claimed that Pimentel was a follower of Anwar al-Awlaki, the ‘radical American-born cleric’ who attended dinner at the Pentagon and was, allegedly, murdered by a missile from US drone in September 2011. They charge a pretty high price for dinner at the Pentagon. In case you’re having trouble believing that a guy with alleged links to the ‘9/11 hijackers’ would be wined and dined at the Pentagon, even Fox news admitted it, so you know there must be even more to the story. I recommend you check out that last link, if only to skip to minute 1.04 to hear the Fox news pundit saying probably the most ironic thing you’ll ever hear:

“A defense dept. spokesman has declined our request for an interview and it’s not clear, frankly, what exactly the vetting process is at the Pentagon, that would have allowed a known associate of the 9/11 hijackers into the US military’s headquarters…”

Yeah, those Islamic terrorist ‘vetting processes’ at the Pentagon are a real mystery…at least to Fox News.

According to Commissioner Kelly, Pimentel “tried to contact al-Awlaki directly, but never got a response”. No doubt he needed a higher Pentagon security clearance, or an invite to dinner, to pull that one off. But we’re not just talking about the FBI and the Pentagon here. The CIA is, naturally, up to its neck in phony terrorism of the Muslim variety, and not just overseas. For example, according to an October 2011 CBS News report:

[…] three months ago, one of the CIA’s most experienced clandestine operatives started work inside the New York Police Department. His title is special assistant to the deputy commissioner of intelligence. On that much, everyone agrees.

Exactly what he’s doing there, however, is much less clear.

Since The Associated Press revealed the assignment in August, federal and city officials have offered differing explanations for why this CIA officer – a seasoned operative who handled foreign agents and ran complex operations in Jordan and Pakistan – was assigned to a municipal police department. The CIA is prohibited from spying domestically, and its unusual partnership with the NYPD has troubled top lawmakers and prompted an internal investigation.

His role is important because the last time a CIA officer worked so closely with the NYPD, beginning in the months after the 9/11 attacks, he became the architect of aggressive police programs that monitored Muslim neighborhoods. With the earlier help from this CIA official, the police put entire communities under the microscope based on ethnicity rather allegations of wrongdoing, according to the AP investigation.

So there you have it. This latest ‘lone wolf’ story is nothing more than another CIA/FBI farce, another desperate attempt to re-inflate the fantastical and fictitious bubble that is the ‘war on terror’ by conflating ordinary Americans and their justified grievances with ‘terrorism’. In doing so, the psychopaths in power hope to distract public attention away from the very real crimes of the American government, its agencies and its corporate and banking cronies and to criminialize dissent forever.

“This country, with its institutions, belongs to the people who inhabit it. Whenever they shall grow weary of the existing government, they can exercise their constitutional right of amending it, or exercise their revolutionary right to overthrow it.”