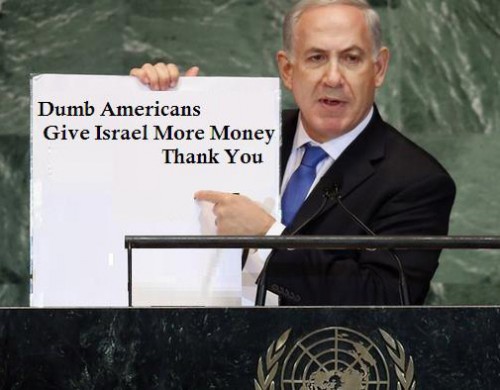 For all those who may, despite Netanyahu’s compelling argument at the UN yesterday, feel themselves teetering on the brink of falling for the foul-smelling propaganda about Iran and its “nuclear threat” to the world, there are a few things I’d like you to consider.

What Iran is doing is attempting to achieve a ‘nuclear capability’ like nuclear power plants and Medical reactors etc. The problem for Israel (or so Netanyahu claims on behalf of all Israelis), is that once Iran achieves this ‘nuclear capability’ there is little to stop them from using that capability to ultimately produce a nuclear weapon, if they choose to do so.

The first thing to note is that all of the furor around Iran having a ‘nuclear capability’ refers to its ability to potentially build ONE nuclear bomb. But what would Iran do with that ONE nuke, if it were even to decide to make it? Would Iran then be in a position to threaten the entire world?

Just to put this in perspective, the following table shows the nuclear-equipped countries and the number of nukes they possess:

There are many reasons why certain countries have nukes and others do not. One factor would seem to be the resources and relative wealth of a country, which in turn seems to be a function of the size of the population of a country. This is evidenced by the fact that, of the 8 nuclear-equipped nations, 5 appear in the top 8 most populous countries in the world. France and Britain holding positions 20 and 21 respectively.

The idea seems to be that any country that does not possess nukes is, by definition, not much of a threat to anyone, or, at least not much of a threat to the nuclear-equipped countries. In the case that such a country was nevertheless deemed to be in need of a good invading by a nuclear-equipped country, there would probably be no requirement to use nukes. See Iraq and Afghanistan for two recent examples of this.

There is one exception to this rule however – Israel – and this exception reveals one of the other factors that can lead to a country acquiring nuclear capability. Israel, defined by a former French politician as “a shitty little country”1, has a mere 5 million people. Despite this, Israel possesses more nukes than India and Pakistan combined, two countries which together have close to 1.25 billion people, or about 250 times the population of Israel. I know, sounds kinda crazy, but we are dealing with a very particular type of human being here, with a rather deviant world-view, so sanity is not really a factor.

So let’s say Iran gets to make its one nuke at some point in the future. What would it do? Threaten the entire planet? Hardly. The best it could do would be to threaten one country. Who would it threaten? Israel? France? Britain? Pakistan? India? Possibly. If Iran lobbed its ONE nuke at Israel for example, Israel could respond with 100 or 200 nukes, or as many as were needed to turn Iran into a 1,648 million square kilometer glass parking lot for U.S. military Humvees.

Yet we are supposed to believe that none of the Iranian elite are aware of this fact, or, that they would be willing to sacrifice the very existence of Iran, and their own positions of power, to destroy Israel (and most of the Palestinians too, not to mention the fall-out effects on the population of Lebanon). This is the kind of nonsense that was at the core of Netanyahu’s speech at the UN on September 27th 2012. To those with an operating bullshit meter however, it is clear that if some present or future Iranian leader(s) were to possess a nuclear weapon and tried to directly threaten anyone with it, the only real threat would be to the Iranian elite and the Iranian people.

At the UN yesterday, Netanyahu tried to address this point with more nonsense:

[…] the Ayatollahs of Iran, mutually assured destruction is not a deterrent, it’s an inducement.

Iran’s apocalyptic leaders believe that a medieval holy man will reappear in the wake of a devastating Holy War, thereby ensuring that their brand of radical Islam will rule the earth.

That’s not just what they believe. That’s what is actually guiding their policies and their actions.”

Netanyahu is, of course, just spouting more nonsense. There is nothing specific in Shia prophecy about a “devastating Holy war”.

In Judaic‘end times’ belief however:

“The war of Gog and Magog envisioned in Ezekiel 38 is expected to occur in the end of days. This is described to be a climatic war that is said to occur at the end of the Jewish exile. Persia and other powers from the north are said to attack Israel, where the God of Israel reveals himself and ends the war. Radak comments on Zechariah 14, that in the end of days Jerusalem will be the battle ground of Gog and Magog.”

The Real Problem and Threat

In the last few years, Brazil has been following a very similar course as Iran, but no one has batted an eyelid. Why? We can only presume that it is because the state of Israel was not illegally established in South America.

While it has always suited Western powers for the Israelis to act as a sort of colonial (read ‘oil resource’) policeman in the area, countries like the UK and the US (who actively facilitated the creation of the Israeli state) always had the option to back out of any eventual unsavory political or military quagmires that might have arisen between Israel and its Arab neighbors. The Israelis, on the other hand, have always been much more heavily invested in the project to ‘reshape the Middle East’ because they chose to establish a state on Palestinian land.

The real source of the “Middle East conflict” then is the establishment of the state of Israel on Palestinian land in 1948 and the way in which successive Israeli governments have treated their Arab neighbors since then. You don’t have to be a genius to realise that if you decide to force your way in to, and on to the land of another people and then proceed ethnically cleanse the inhabitants and hold the land by force, you should expect to live in a more or less constant state of actual or potential conflict.

Such a choice would also tend to make you a little paranoid, justifiably or not, about the neighbors for whom your very existence is a reminder of the injustice done to them. In case you haven’t noticed, the Israeli government is paranoid to the point of mental illness. Such paranoia begets the well-known Israeli aggression that has cost thousands of Palestinian and Lebanese civilians their lives.

To deal with the problem of being surrounded by Arab neighbors, a problem created by the Israelis themselves, successive Israeli governments have opted for a policy of attempting to weaken Middle Eastern Arab states by meddling in their political and economic affairs. In this way, Israeli governments have been able to minimize any real threat to Israel posed by angry Arab neighbors.

The Israelis have also been very successful in demonizing any legitimate attempts by Arab groups to physically attack Israel by associating such attacks with ‘Islamic terrorism’ and presenting Israel as the West’s civilized vanguard against the Muslim barbarians. The extent to which the ‘reality’ of ‘Islamic terrorism’ has been promoted, and often manufactured by the Israelis should also be noted here.

The truth of the matter is that the Israeli, (and to a slightly lessor extent, American), exhortations that the world must prevent Iran from making a nuclear bomb because it would pose a threat to “the modern world” is a cover for the real threat to Israel from an economically and politically independent Iran that can do much to curtail Israeli political and economic hegemony in the Middle East, and thereby ultimately relegate Israel to its proper place as a rather small and insignificant Middle Eastern nation. That would be the best, ‘worst case’ scenario for the Israelis. The worst, ‘worst case’ scenario would be where, having been politically ‘down-sized’ in this way, the question of the legitimacy (or rather illegitimacy) of an Israeli state on Palestinian land would be considered seriously.

This, in effect, is what scares the bejesus (or Jehovah) out of Netanyahu and his ilk. The ‘Iranian nuclear threat’ is patently a cover story designed to garner public opinion for an attack on Iran that, Netanyahu hopes, will destroy a modern and flourishing Middle Eastern Muslim nation, and ensure Israeli dominance, and unaccountability for its crimes in the region for a few more years.

1 His complete comments were: “All the current troubles in the world are because of that shitty little country Israel. Why should the world be in danger of World War III because of those people?”

P.S. The last time some idiot warmonger came to the U.N. with dodgy props, this is what it looked like: 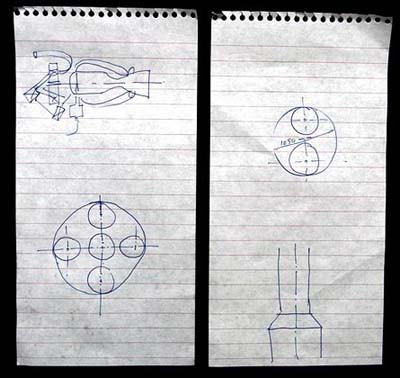 The above is a piece of ‘evidence’ presented by Colin Powell to the UN in 2003 on the eve of the Iraq invasion. The result? 1.5 million Iraqi civilians dead, and counting…