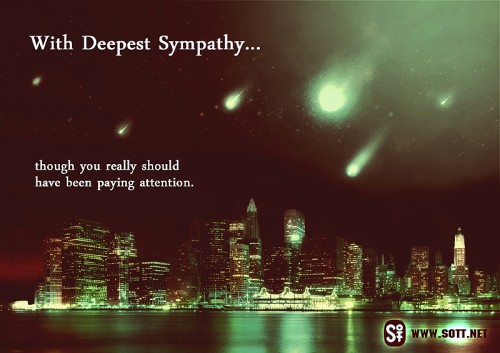 Many scientists are quite happy to talk openly about a ‘sixth extinction‘ being underway for the past 10,000 years or so because they blame humans for it.  Blaming humans carries with it the anthropocentric implication that we are in some way immune to sudden extinction and can do something about the extinction of other species, if only we would change our ‘global warming’ ways! The true facts of the history of life on earth, however, suggest that, from ‘nature’s’ point of view, humans are just one more species whose days are also numbered. Indeed, the historical record shows that nature has, time and again, proven itself very adept and creative at resetting the clock on even the most ‘advanced’ civilizations.

For those who don’t want to read any further (or be confronted with the evidence), the nitty gritty is that, over the past few years, the celestial signs, in the form of an increasing number of meteorites/comet fragments invading our not-so-rarefied atmosphere, point to humanity being on the verge of an ‘extinction level event’.

Louisiana Explosion – Just one more in a long list

Sott.net has been tracking the startling increase in reports of  meteorite/comet fragment sightings and impacts for at least 8 years, and there have been many hundreds of such reports in that time period. This alone should give us cause for concern. Check out the above link just to get an idea of just how frequent meteorite/comet fragment sighting have become. Of course, you might say that this apparent increase could just be the result of us paying more attention, but the numbers don’t lie. For example, browsing the right bar links on the above Sott.net blog, you’ll notice that in 2004, 2005 and 2006, reports were consolidated into two month periods, and there were, on average, less than 10 sightings over that 2-month period. By contrast, in 2008, reports were plentiful enough to begin collating them into monthly records and, since then, their number has increased steadily.

Coming back to the present; over the past few days, several reports of meteorite/comet fragment sightings and impacts across the globe have been registered. However, I want to look at one specific event that occurred two days ago on Monday 15th Oct.

On that night, people across Texas, Louisiana and Mississippi reported seeing bright flashes in the sky and fireball trails. And in the Shreveport area of NW Louisiana, many residents also heard loud ‘booms’ that shook houses to their foundations and broke many windows in the town of Minden. In fact, there were reports that people as far away as Longview, Texas, felt the explosion. Here are the words of Amy Mealey who lives just a few miles from Camp Minden:

“I honestly thought we were being bombed,” Mealey said of the explosion at an Explo Systems bunker, also known as an igloo, in Webster Parish. “It was the scariest thing I’ve ever been through.”

Mealey was checking some last-minute emails before going to bed when she felt an odd feeling in the pit of her stomach — like a rolling thunder in the distance. “It was getting closer and closer, and I felt everything moving with me,” the mother of two said. “I could literally feel it moving toward me.”

The explosion shook her house, shattering a lead window and blowing out its frame.

And some excerpts from Facebook postings of residents of Minden:

Elaina McKissack Pepper: … No damage but me and Zeb both got up and started checking on the kids because we were sure something was very wrong. After checking outside, Zeb gave up. It shook our whole house kind of like an earthquake.

Lela Bryan Lemoine: In Minden, felt like our house was hit by something. Didn’t really hear anything though. But scared the heck out of us!

Angela Bogues Davis: We live on Fort Ave. I was upstairs and our house shook and swayed.

Judy Savell Jackson: … I heard and felt it at my house, but so did everyone else in Minden and surrounding areas!

Mickie Howard Young: I felt the explosion here in S. Sibley, I thought it was the pipeline at first. Shook the entire house, but we have no damage. Just a heart that nearly jumped out of my chest.

From Amy in Princeton, Louisiana:  “Extremely loud boom like an explosion, caused house to shake for several seconds.”

From Donna in Benton, Louisiana: “Large explosion then felt like a whoosh of pressure through house and house shaking.”

Given the significant number of similar reports over the past few years, this event would have been just one more meteorite/comet fragment event, if it weren’t for the perplexing official response.

When dozens of people called the Webster Parish Sheriff’s Office, as well as to the KSLA News 12 newsroom to report seeing flashes of light in the sky and hearing loud booms that shook houses, the sheriff’s office initially stated that there was a “possibility that a meteor did hit the ground” in the area. The following morning however, Webster Parish Sheriff, Gary Sexton, claimed that the mystery had been solved, that ‘hazmat experts’ told him that what people had actually seen and heard was an underground bunker containing explosives that blew up late Monday night at Camp Minden. Not only was there nothing to see here, but the explosion “worked exactly as it was designed to do.”

Sheriff Sexton described the bunker, in the “L-1 area,” as an “igloo,” constructed of concrete that was built in the 50s and designed to send any blast up instead of out to lessen the shock wave impact. Given that the bunker  in question belongs to a company called Explo Systems Inc., it seems plausible that the information about the ‘bunker explosion’ came from this corporation. Strangely enough, a news conference held by officials from Explo that had been scheduled for Wednesday morning was canceled at the last minute with no explanation given.

The first problem with the “munition dump explosion” answer is a problem of coincidence.

What are the odds that, at around the same time as people across three states (Mississippi, Texas and Louisiana, and hundreds of miles apart) were seeing what was clearly a meteorite/comet fragment burning up in the lower earth atmosphere, a munitions dump would explode in the same area? More to the point, if a munitions dump did explode, what are the odds that a meteorite/comet fragment, that many eyewitnesses believe hit the ground in the area, would be in no way connected to the explosion?

The second problem is one of evidence.

At first light on Tuesday morning, the good people at KSLA news boarded their chopper and flew over the Louisiana army ammunition plant. Here is what they filmed:

The first thing we notice is that the scorch path is not consistent with an explosion from underground, especially a bunker that is “designed to send any blast up instead of out”. Surely that would leave a gaping hole in the ground. Instead, what we see is a long scorch path consistent with a projectile hitting the earth from above at a fairly acute angle.In fact, it is rather similar to the marks left by airplane crashes.

The second thing we notice is that the train that was derailed shows definite evidence of having been hit by an object or blast wave that was moving along the ground (not up and out). Only one carriage appears to be covered in dirt that was pushed forward by the force of the impact, and that same carriage appears to be the only one that has been literally cut in two (minute 1.27 and 1.35 in the video) with a force that was concentrated in one specific area.

This link, will take you to the Google map of the area where the incident is alleged to have taken place. You can see the ‘igloo’ ammo bunkers referred to by Sheriff Sexton and note that there does seem to be a network of rail tracks with carriages around the area.

We are also told that the explosion sent a ‘plume’ 7,000 feet into the air. AccuWeather.com ran an analysis from radar imagery and produced a 3D render of this ‘plume’. 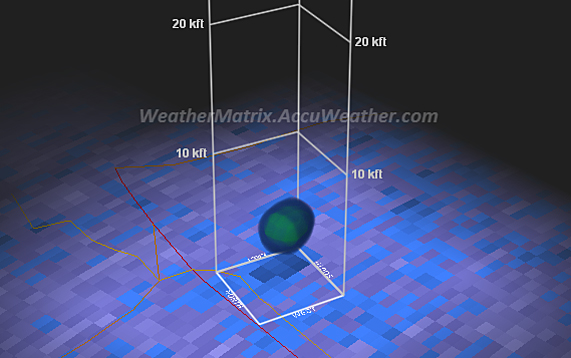 According to Accuweather: “this was a significant object, showing up at a reflectivity of 42 dBZ (which would normally be ‘moderate rain’)”

The suggestion that the radar image of the plume is similar to a radar image of moderate rain seems to be backed up by the reports from eyewitnesses that “black sooty ashes” (some of them as big as a quarter) rained down on their cars and houses. My question here is: do munitions explosions typically result in black sooty ashes, “like sleet” falling on the surrounding area several miles away from the explosion? I can’t say for sure, but what I can say is that there have been reports that overhead meteorite explosions, or just meteorite or comet fragments passing through our atmosphere, have resulted in ash falling from the sky. For example, on the 25th August 2012, Maryann Morgan Fredericton, from New Brunswick, Canada reported this exact phenomenon.

By the way, the above radar image immediately reminds me of another radar image of ‘unknown turbulence’ over Beebe, Arkansas on January 1st 2011 that led to one of the many mass bird die-off episodes, and which I wrote about extensively here. Note that the detonation also occurred at about 7,000ft.

Given the available evidence, my theory at the moment is this:

the events of Monday evening that were reported in the NW Louisiana area, and specifically near the Camp Minden base, were the result of a meteorite/comet fragment entering  the earth’s atmosphere and following a SE to NW trajectory, roughly over mid Florida and proceeding over the gulf of Mexico and then over the states of Mississippi and Louisiana. Over the NW Louisiana area the object exploded, causing a loud boom. A fragment continued on and hit the ground in the Camp Minden area. The ash that is reported to have fallen came from the initial overhead explosion.

Before I finish, there is one further idea that I think is worth taking seriously. There has been much speculation on, and support for, the idea that viruses can and do come from ‘space’ aka panspermia. That is to say, viruses are carried to earth on space rocks carrying some form of carbon-based life form that enter our atmosphere and deposit said life form on our planet. It has been suggested that Halley’s Comet, for example, caused the outbreak of the 1918 ‘Spanish Flu’, (that didn’t come from Spain). The theory is that the way in which the ‘Spanish flu’ spread cannot be explained by human to human transmission, and that the only reasonable explanation is that it was carried in the air, at very high altitude, like in the upper atmosphere. More recently, the particularly bad flu season of 2000 has also been blamed, by eminent scientists, on dust from comets passing close to the earth, and the 1908 Tunguska ‘meteorite’ impact was actually a comet fragment that was carrying organic matter.

So what’s my point? Maybe it’s that, as our ‘advanced’ global society down here on earth continues to circle the plug hole, the skies above our heads seem to be growing ever more crowded with potentially death-dealing space rocks. And maybe the two are connected in some strange way.

1 thought on “Meteorite Impacts Earth in Minden, Louisiana – Media and Government Cover It Up”