In January this year, the web site of UK-based ‘ defense contractor’, Britam Defense, were hacked by someone that ‘authorities’ claim (unsurprisingly) may have been of the Iranian persuasion (Iranians do everything bad these days don’t ya know!). Part of the trove of documents that were uploaded to various websites included two emails.

One email had “Syrian Issue” in the subject field and the other has “Iranian Issue” in the subject field. Both emails appeared to be from David Goulding, the actual business development manager of Britam Defence and appeared to have been sent to Phillip Doughty, the actual founder of Britam. Many alternative news web sites have used these emails as evidence that the recent alleged ‘chemical weapon’ attack in Syria was the work of the Western-backed Syrian rebels rather than the Syrian military. The problem however is that the emails appear to be have been faked.

“Please see attached details of preparatory measures concerning the Iranian issue.Â  Participation of Britam in the operation is confirmed by the Saudis.Â  http://mbf.cc/OTEH8”

Amongst the other documents that were hacked is a word document apparently detailing a training program for Saudi military personnel to defend against an attack by an unknown enemy.

We’ve got a new offer.Â  It’s about Syria again.Â Qataris propose an attractive deal and swear that the idea is approved by Washington.
We’ll have to deliver a CW to Homs, a Soviet origin g-shell from Libya similar to those that Assad should have.Â They want us to deploy our Ukrainian personnel that should speak Russian and make a video record.

Frankly, I don’t think it’s a good idea but the sums proposed are enormous.Â  Your opinion?

I wrote about this particular email back in late January. But with the recent alleged ‘chemical weapon’ attack in Damascus, and the impending attack on Syria by “NATO” for that alleged chemical weapon attack (don’t even try to figure out the logic, there is none), I had cause to revisit the now famous Britam Defence files.

A little further research brought to light the fact that, since I wrote my first article on the files, the UK Daily Mail newspaper that had published the ‘Syria Issue’ email in January, had been sued for defamation by attorneys acting for Britam Defence. Britam claimed, and apparently proved, in court that the emails had been faked. They pointed to the fact that the message IDs in both emails are exactly the same, when normally every email has a different message ID. And, sure enough, the ID’s are the same.

In short, it seems likely that the Britam Defence email about the ‘plot’ to frame Assad for a chemical weapon attack on his own people, was faked by someone, possibly the original hacker, who may or may not have been Iranian. (Heck, he could have been working for the CIA/MI6/Mossad axis of evil and we’ve all been set-up.)

I found it interesting however that the law firm used by Britam to bring the defamation case against the Daily Mail was the well-known (in the UK at least) Carter-Rucking, a firm that has a reputation for arguing defamation and libel court cases for the rich, famous and corrupt. For example, Carter-Rucking were accused of censorship in the 2009 ‘Trafigura’ case where Carter-Rucking, on behalf of their client ‘Trafigura’, attempted to prevent, British newspapers, by way of a ‘super-injunction’, from revealing the details of the Minton report, which exposed the fact that Trafigura, the third largest multi-national oil and metals trading company, had been dumping hazardous waste on the Ivory Coast, causing the deaths of multiple people and injury to many more.

For those interested, Trafigura appears to be one half of an original company owned by Marc Rich (the other half is today known as ‘Glencore international AG). Marc Rich was the man who was famously pardoned in January 2001 by Bill Clinton, just hours before Clinton left office. Rich had been indicted on tax evasion, racketeering and trading with Iran during the Iran Hostage Crisis in 1979.

In a 1991 Bank of England investigation into the former ‘Bank of Credit and Commerce International’ (BCCI), (BCCI was was formed in 1972 for the express purpose of laundering money for Western intelligence agencies), Marc Rich was identified by a Syrian-born BCCI London branch manager as the person who accompanied Iraqi ‘businessman’ Samir Najmeddin on trips to the London branch of BCCI. Part of Najmeddin’s ‘business’ was channeling weapons from the US govt. and the CIA to Saddam Hussein (like the chemical weapons that Saddam may or may not have used against the Kurds, but which were used as the final justification for the 2003 US invasion of Iraq, even though he no longer had them).

Najmeddin’s visits to BCCI with Marc Rich were also to manage the BCCI accounts of arch Palestinian “terrorist” Abu-Nidal. The problem is that Abu Nidal was a long-term US/Israeli spy who only pretended to be a Palestinian freedom-fighter. He was shot in Iraq (where he had been living) in 2002 by the IraqiÂ Mukhabarat when it was discovered that he was still working for the Americans and the Israelis as they plotted their 2003 ‘operation Iraqi freedom.

There’s a pretty deep and murky rabbit hole right there as you can probably imagine, but it’s beyond the scope of this article.

The point in citing Trafigura and Carter-Rucking is to highlight the fact that, to protect its reputation against the allegations that it was involved in a chemical ‘false flag’ attack in Syria, Britam Defence used a law firm that has a long track record of ‘defending’ important, scandal-ridden clients and corporations against “defamation” that turned out to be not so defamatory after all.

In any case, we can’t, in all conscience, rely on the hacked Britam emails to argue that the claims made by the US, UK and French governments that the Syrian government attacked the Syrian people with chemical weapons are a pack of lies and that it was most likely the the Syrian rebels that carried out the attack with the help of Western ‘security contractors’. Luckily, we don’t have to. 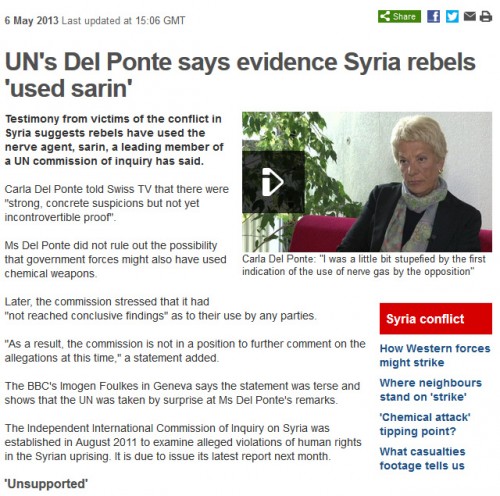 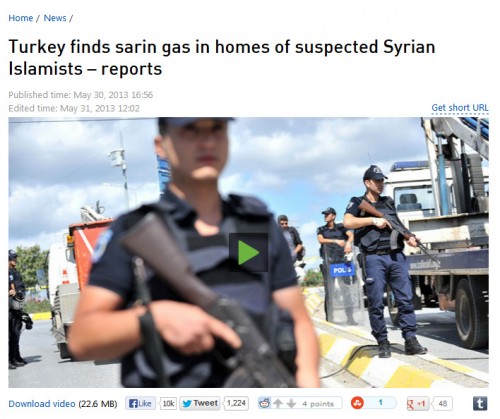 But hang on a minute. Am I suggesting that chemical weapons were actually used, by someone, in a Damascus suburb? If I am, I shouldn’t be. In the videos of the alleged attack, did you notice that none of the people treating the casualties or photographing them are wearing any sort of chemical-warfare protective gear? Did you notice that, despite that, none of them seemed to be affected by the gas? I’m not just blowing smoke here, because:

â€œAt the moment, I am not totally convinced because the people that are helping them are without any protective clothing and without any respirators,â€ said Paula Vanninen, director of Verifin, the Finnish Institute for Verification of the Chemical Weapons Convention.

John Hart, head of the Chemical and Biological Security Project at Stockholm International Peace Research Institute said he had not seen the telltale evidence in the eyes of the victims that would be compelling evidence of chemical weapons use.

â€œOf the videos that Iâ€™ve seen for the last few hours, none of them show pinpoint pupilsâ€¦ this would indicate exposure to organophosphorus nerve agents,â€ he said.

Gwyn Winfield, editor of CBRNe World magazine, which specialises in chemical weapons issues, said the evidence did not suggest that the chemicals used were of the weapons-grade that the Syrian army possesses in its stockpiles.

â€œWeâ€™re not seeing reports that doctors and nursesâ€¦ are becoming fatalities, so that would suggest that the toxicity of it isnâ€™t what we would consider military sarin.

Stephen Johnson, an expert in weapons and chemical explosives at Cranfield Forensic Institute, said that the video footage looked suspect:

There are, within some of the videos, examples which seem a little hyper-real, and almost as if theyâ€™ve been set up. Which is not to say that they are fake but it does cause some concern. Some of the people with foaming, the foam seems to be too white, too pure, and not consistent with the sort of internal injury you might expect to see, which youâ€™d expect to be bloodier or yellower.

Chemical and biological weapons researcherÂ Jean Pascal Zanders saidÂ  that the footage appears to show victims of asphyxiation, which is not consistent with the use of mustard gas or the nerve agents VX or sarin:

Iâ€™m deliberately not using the term chemical weapons here,â€ he said, adding that the use of â€œindustrial toxicantsâ€ was a more likely explanation.

Hang on a minute, did he say “industrial toxicants”? Back in December 2012 a video appeared on Youtube that claimed to show Syrian rebels gassing a rabbit to death and threatening Alawite Syrians with the same fate. In the video, industrial toxicants such as Potassium chloride can be seen under the name of Turkish chemical company ‘Tekkim’.

The Syrian army has discovered a storehouse belonging to rebels in the Damascus area of Jobar, where toxic chemical substances â€“ including chlorine â€“ have been produced and kept, State TV reported.

Military sources reported that the militants â€œwere preparing to fire mortars in the suburbs of the capital and were going to pack missiles with chemical warheads.â€

A video shot by RTâ€™s sister channel Russia Al Youm shows an old, partly ruined building which was set up as a laboratory. After entering the building, Syrian Army officers found scores of canisters and bags laid on the floor and tables. According to a warning sign on the bags, the â€œcorrosiveâ€ substance was made in Saudi Arabia.

So where does all of this leave the statements of people like U.S. Sec. of State John Kerry, UK PM David Cameron, UK Foreign Sec. William Hague and French President Hollande, that they know for sure that President Assad himself ordered the alleged “chemical weapons attack”? Naturally, it leaves them in the same place where the statements about Saddam’s WMD’s made by President Bush and former psycho PM Tony Blair in 2003 currently lie; on the trash heap.

Oh, and just for the sake of it; in 2004, the US military dropped tons of White Phosphorus on the Iraqi town of Fallujah, killing hundreds of Iraqi civilians in the most horrible ways. White Phosphorous is a chemical weapon. Not that anyone cares.

The problem is that humans these days seem to have lost the ability to learn from past mistakes, or even remember them. So don’t expect any of this data to interfere with the jolly little bombing campaign that the psycho elite are planning for the Syrian people. And don’t believe for a second that any purported ‘surgical strikes against the Assad regime’ will do anything other than produce the exact same result as the “surgical strikes against Ghaddafi”, when 40,000 Libyan civilians somehow ended up dead.

1 thought on “Syria, Chemical Weapons and the Britam Defence emails”