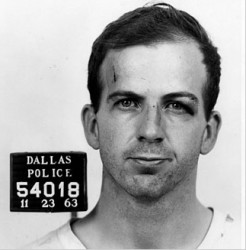 CaveatÂ  Lector: This short essay is written for those who are already familiar and comfortable with the evidence that elements of the US political, industrial and military establishment, rather than Lee Harvey Oswald, were responsible for the murder of John F. Kennedy.

Within the first year of JFK’s presidency, it undoubtedly became clear to the CIA and other power brokers within the US that this particular president was not like the others. He wasn’t exactly supportive of the role of ‘prosecutors of covert and proxy wars’ that the CIA had carved out for itself over the preceding 10 years. He wasn’t inclined to sit back and watch as the military-industrial complex generated massive profits at the expense of the freedoms and lives of America’s growing underclass and dark-skinned people in ‘far off lands’. In short, he had the bizarre notion that, as President, he should genuinely serve the people rather than act as a mere puppet of, and spokesman for, the ruling elite of the day.Â  More to the point, he planned to use the massive support he had garnered and enjoyed among the American population to do it.

The common ideology that motivated the CIA (and other assorted US intel agencies) and the defense contractors and oil (etc.) executives in the USÂ  isn’t hard to define. The CIA and assorted agencies are the American government, to all intents and purposes, and have been for many decades. The CIA, NSA, DIA ONI etc. dedicate themselves to America’s “strategic interests”; tell me, since when have America’s “strategic interests” been anything other than increasing the power and wealth of a small elite? The CIA served the “interests” of this elite on an international scale. In their desire to pursue the Vietnam “war” for example, the narrative went like this:

“As soon as we’re done dropping tons of troops and bombs and military equipment on the Commies in Asia, and the defense contractors are happy, we’ll get a friendly government in there and their oil and raw materials market will be up for grabs”

On the domestic front, JFK was planning (for one example) to repeal the ‘oil depreciation allowance’ (ODA). The ODA worked like this:

An oilman drills a well that costs $100,000. He finds a reservoir containing $10,000,000 worth of oil. The well produces $1 million worth of oil per year for ten years. In the very first year, thanks to the depletion allowance, the oilman could deduct 27.5 per cent, or $275,000, of that $1 million in income from his taxable income. Thus, in just one year, he’s deducted nearly three times his initial investment. But the depletion allowance continues to pay off. For each of the next nine years, he gets to continue taking the $275,000 depletion deduction. By the end of the tenth year, the oilman has deducted $2.75 million from his taxable income, even though his initial investment was only $100,000

Naturally, oil men across the country were not pleased.

To give you an idea of the very intimate connections between politicians, industrialists and the military in 1960’s America, consider the ‘Suite 8F group’.

The Suite 8F Group, also referred to as the ‘8F Crowd’, was a network of politically active businessman in Texas and other southern states in the early 1960s. The name comes from the room in the Lamar Hotel in Houston, Texas where they held their meetings.

The membership of this clique included:

Most people, even believers in the fact-defying conclusions of the Warren Commission, know that Lee Harvey Oswald renounced his US citizenship in 1959 and ‘defected’ to Russia where he spent almost three years before returning unimpeded by US authorities, to the USA in June 1962 along with his Russian wife. There is good reason to believe that Oswald was one of dozens of gullible young men, otherwise known as ‘double agents’, who were sent to Russia during the 1950s and 60s. Masquerading as ‘defectors’, their job was to spy on the Russians for the CIA. This was, of course, par for the course in the context of the ‘Cold War’ and the Russians while not fooled, were willing to play the game for a chance to either glean some useful information from these bogus ‘defectors’, or perhaps ‘turn them’ into bone fide Russian ‘triple agents’.

Given that anyone with a functioning pair of eyes (or even just one) can ascertain for themselves that the head-shot that killed JFK came from somewhere in front of his motorcade, there is no doubt that Oswald was not a lone assassin, if indeed he was involved in the actual staging of the murder at all. Yet Oswald was quickly arrested as the perpetrator and then murdered within 48 hours to ensure that he could not proclaim his innocence, which he clearly intended to do. So Oswald was the ‘fall guy’Â  in the murder of JFK, plain and simple. But right here we run into a problem. Given Oswald’s history, it seems reasonable to assume that he was set up, not just as the assassin, but an assassin under orders from the Kremlin. In this case, how do we explain the fact that this clear ‘political capital’ was not only not spent, but actively suppressed in the immediate aftermath of the murder?

One week after the assassination, LBJ was putting together members of the Warren Commission (officially known as ‘The President’s Commission on the JFK Assassination’) and instructing them that:

So what gives here? They plan the murder of a US president because he is reneging on his ‘Cold War’ commitments and trying to make peace with enemy. They establish a bone fide ‘Commie traitor’ and place him at the scene of the murder, arrest him immediately afterwards, murder him two days later as he was about to speak to the press, and…they actively SUPPRESS any suggestion that the Russians did it?? Sounds like whole process of ‘sheep-dipping’ Oswald as a Commie sympathizer was a big old waste of time. Why didn’t they just get some weird loner nut with a history of mental illness to do the job?

Well, here’s a theory, take it or leave it.

What if there were two plots to kill Kennedy, or, one main plot that was interfered with and the outcome changed.

The CIA were desperate to, somehow, force Kennedy to change course on his ‘Cold War’ rapprochement with the Russians. But how to do it? Imagine if Kennedy had been the victim of an attempted assassination by ‘Commie sympathizer’ Oswald, rather than an assassination. Imagine if JFK had only been injured, or, not injured at all. Oswald could still have been captured and killed before he could spill the beans, and the facts about his history could have been made public and the blame pinned on the Russians. In such a scenario, would JFK not have been forced to get back on the ‘Cold War’ bandwagon? Could he reasonably expect to continue talking about peace with the Soviet Union and maintain any credibility with the American public?

The problem is that, while such an outcome would have suited the CIA because it would have forced Kennedy to fundamentally change American foreign policy and allow the CIA free reign to engage in their proxy and covert wars of imperial conquest, it would have done little to appease the likes of LBJ and his cronies because there would have been no requirement on JFK to change his domestic policy of clamping down on the corruption and cronyism of LBJ and his oil baron friends. From their point of view, if they were to maintain their positions and privileges, JFK had to die.

So imagine one (or more) shooter(s) in the TSBD and that this was the CIA’s ‘attempted assassination’ team; then imagine that this team were unaware that there was another shooter (or shooters) in the vicinity of the grassy knoll (behind the wooden fence), and that this was LBJ and Co’s ‘kill shot’ team.

If JFK had only been injured or merely shot at, the American public might plausibly have accepted the death of Oswald as justice and not insisted that the Russian be made to pay also. But when Kennedy was murdered, and in such a brutal fashion, such was the extent of the outpouring of grief and anger from the American public, that LBJ and Co. and the CIA, FBI etc. all realised that to publicize any alleged links between Oswald and the Russians was to risk immediate nuclear war. This scenario might explain, therefore, the immediate suppression by the White House, intel agencies, Warren Commission and the media of any talk of the Russians or Cubans having been involved in the assassination, despite the fact that the patsy assassin had been groomed to appear as a bone fide ‘pinko’.

1 thought on “Why Was Oswald’s ‘Commie Background’ Hushed Up?”